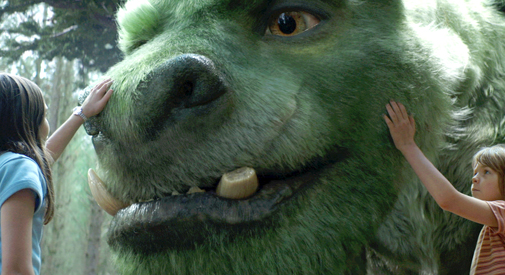 The family film has become increasingly difficult to accomplish well. Sure, there are films such as “The BFG” and especially “Where the Wild Things Are,” but beyond the animated landscape the “fun for the whole family” genre has taken a bit of a nosedive. That’s why the remake of the film “Pete’s Dragon” all the more of a rarity, and one of the biggest and most pleasant surprises of the year so far. 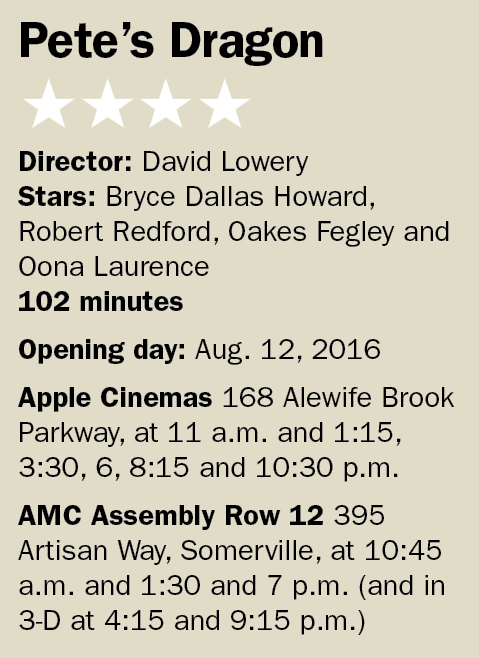 Orphaned at the age of 5 in a car accident, Pete (Oakes Fegley) wanders out into the nearby wood with no one to rescue or take care of him until Elliot appears. Elliot is an enormous, furry green dragon who forms an immediate bond with Pete, taking him quite literally under his wing and sheltering him in the wild for the next six years. All of this changes when he runs into Grace (Bryce Dallas Howard), a forest ranger, and her family,  including her father (Robert Redford) – who also encountered Elliot in his youth, her fiancé Jack (Wes Bentley) and his brother Gavin (Karl Urban), whose main focus is tearing down the forest for his logging company and hunting anything that gives him a challenge.

An adaptation of the not widely known Disney film from 1977, “Pete’s Dragon” wasn’t the most obvious choice to get the remake treatment. Having David Lowery of indy “Ain’t Them Bodies Saints” fame direct the picture is an even less obvious choice on paper for the fantastical elements of the story. But in execution the picture soars, due to his keenly artistic eye and a story tinged with melancholy. Sure, the dragon is more of a dog than a beast, and there’s enough sentimentality to fill up two Disney films, but the themes of overcoming sorrow and loss through sheer force of will is a powerful one, and it elevates what already is a beautiful little tale into something even stronger.

There is a timeless energy to Lowery’s film, beyond his disinterest in showcasing any forms of modern technology that would date the film, and that adds to the film’s overall spirit and its celebration of family, nature and adventure. Rather than focus on the good-guy archetypes or the bad, the film is much more concerned with the relationships between the characters, and it becomes a good-natured romp through the woods that reminds us of Spike Jonze’s “Where the Wild Things Are” in how it handles child leads and their point of view.

While Urban’s Gavin is technically the antagonist of the film, his goals are broad and foolish, and his character – also more cartoonish than the rest – is never cheapened by this. Urban is a delightful character actor in just about any film he’s in, whether as Bones in “Star Trek,” Éomer in “Lord of the Rings” or as Judge Dredd, and Gavin becomes a fully fleshed-out character because of it. The film has plenty of riches among its cast, with Howard and Redford bringing not just some ginger power but a sense of gravitas to the proceedings. Howard is in particular a sturdy presence to build a fairytale around. Her rapport with Fegley builds on the idea that when Grace was Pete’s age, she would have adored to find herself in the company of a real-life dragon; they’re individuals who seek out the wonder in the world.

Cinematographer Bojan Bazelli and Lowery contribute, crafting a film so immersed in the childhood experience that it’s awe-inspiring, overflowing with love for its characters and curiosity. There isn’t anything complex about the story being told; the complexities lay in the craft that went into the film. The film is gorgeous to look at, helping sell the idea of Pete and Elliot’s long-lost immersion in their overgrown little hub of nature. The New Zealand-filmed landscape (though set in this author’s home state of Maine!) is perfect for this film, representing the lushness of the area and the small-town experience of individuals who still live in and thrive off of the nature surrounding them. Lowery may have seemed like an odd choice at the start of production, but to look back at his work in “Ain’t Them Bodies Saints” is to find a director perfectly primed for this story, with a ready eye for nature and for those who seem to be stuck in their own time.

Tender, warmhearted and, most importantly, earnest to its core, “Pete’s Dragon” hearkens back to old adventure stories, an “E.T.” for today’s generation of kids that inspires wonder and the want for exploration. It’s a film for kids who like to make believe.