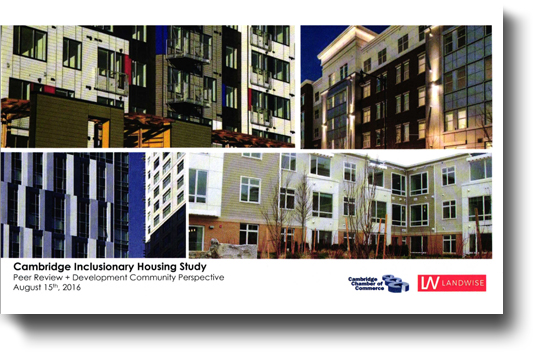 An analysis by Landwise Advisors comes to different conclusions on affordable housing than a city-funded study. Click on the image above to see the Landwise study.

Developers are scared. The proposed doubling of required lower-priced apartments to 20 percent of a building would ultimately result in fewer affordable units, not more, a coalition of developers told the City Council on Monday.

The message came at a meeting of the council’s Housing Committee and was organized by the Cambridge Chamber of Commerce, which hired Watertown-based Landwise Advisors to provide an analytical counter to the city’s nexus study that was completed in March by David Paul Rosen & Associates and helped councillors identify a 20 percent goal. 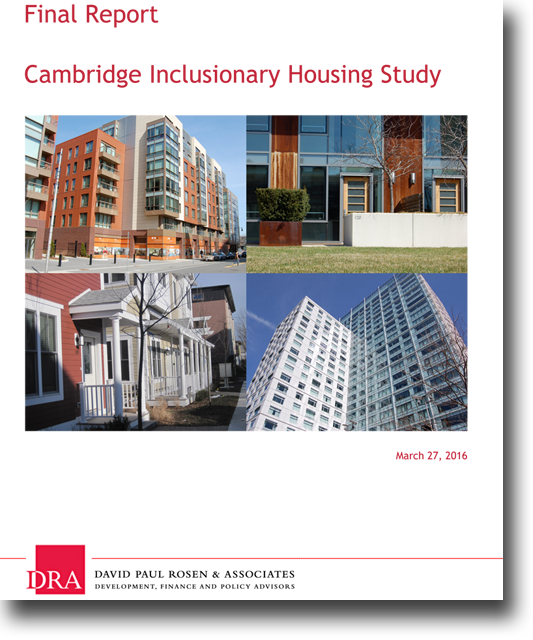 Click on the above image to read a PDF of a city-released report on “inclusionary housing” rules affecting affordable housing.

The inclusionary nexus study was commissioned by the city in 2014 as a prerequisite to raise the rate of affordable housing units that developers of large housing projects are required to provide. Inclusionary housing applies to all residential developments with 10 or more units, and the current rate devotes 11.5 percent of units in a development for affordable housing, unchanged since 1998. The study gives an economic and financial justification for the higher proposed rate, allowing the city to have confidence it will not hinder the pace of development, and also to defend against any legal challenges that the inclusionary zoning ordinance could qualify as an unjustified “taking” of property.

The nexus study’s economic feasibility analysis found that the 20 percent rate “would have a financial impact, but would not necessarily render developments economically problematic,” head city planner Iram Farooq told the council in an April 6 memo summarizing the study. City staff and the city’s Affordable Housing Trust support the 20 percent recommendation, and many councillors have seized upon it.

Monday’s meeting (see a video here) was the fourth of the council committee on the inclusionary rate change since the nexus study came out. Mayor E. Denise Simmons has expressed a desire to have the new rate enacted in zoning this year, ideally with the Ordinance Committee holding hearings in September. But at the July 11 meeting, the development and business community began to sound an alarm. Sarah Kennedy, a lobbyist for the Chamber of Commerce, told the council that “The Chamber is engaged in a peer review of the David Paul Rosen report, as we have lingering questions about some of the potential unintended consequences.” The group presented the results of that peer review yesterday.

Jon Trementozzi of Landwise told the council that adoption of the 20 percent rate would encourage developers to build lab and office projects instead of residential projects, and the result would be fewer affordable units for the city. It would also result in fewer market-rate units and higher housing prices throughout the entire city, he said.

Trementozzi recommended a maximum rate of 15 percent, with regular re-examination of the rate to account for market conditions.

But Trementozzi said that it was unwise to set policy based on the current “extraordinarily strong market that is not sustainable over the long term.”

“It doesn’t leave any margin for the market to change at all,” he added later. “Even if it cools just slightly – flattens out – gets into the high fours, that percentage doesn’t work.” And cap rates are cyclical and don’t hold steady, he said.

Trementozzi told the council that the average cap rate in preferred markets over the past 10 years is “just north of 5 percent,” invalidating the nexus study’s feasibility analysis. “You can’t buy land at today’s market at the rates that are used in the Rosen study.”

“Four percent is a very very optimistic cap rate; they’re not leaving much room for error,” said Robert Reardon, the city assessor, in an interview today. “The caveat to that is: it does work today. There are sales at that level. They are working.”

Many of those developers spoke at public comment, urging the city not to adopt the 20 percent. Several suggested their existing projects were just barely viable at today’s 11.5 percent rate, implying that they would not have been developable under the Landwise proposal of 15 percent.

Tom O’Brien of HYM Investments cited the example of their Twenty20 project at NorthPoint, 20 Child St., developed in 2013: “If the affordable unit requirement on that building had been up from 11.5 percent all the way to 20 percent, in our view the math would not work in the investment climate today.”

Tom Sullivan of DivcoWest, the new NorthPoint owners, spoke similarly, noting that NorthPoint needs critical mass, and to build two major commercial projects and one residential project with “as much haste as possible.” But, Sullivan said, the 20 percent rate would have a “dramatic, immediate and sudden” effect on their ability to do so. Sullivan cited the problems with the light rail green line extension as another unplanned cost associated with NorthPoint projects.

Bill Kane from Biomed Realty discussed how even in today’s market with the 11.5 percent rate, it was much more profitable for the company to keep the former Vertex Pharmaceuticals space in Cambridgeport as research space, and that Biomed had considered and rejected residential for that property.

David Hall of the Hanover Co. discussed its recent developments at Alewife: 160, 130 and 88 CambridgePark Drive. Under the 20 percent rate, he said, “none of these would have been built at the current land price.”

Joe Maguire from Alexandria noted that the returns on housing are much less than the returns on lab and office in his portfolio, and that while their residential development at 270 Third St. “paid for itself, there was no profit.”

Additionally, a few residents and housing advocates spoke: Lee Farris, Elaine DeRosa and Sherry Tucker all asked the council to stick with the proposed 20 percent rate that city staff have advocated for.

The council seemed uncertain how to react to the cap rate difference between the nexus study and the Landwise analysis. Simmons expressed frustration that the council had only received the Landwise presentation that morning, and city staff had not had a chance to analyze it. Councillors asked staff to discuss the Landwise study with the nexus study consultants and report back at the Aug. 30 meeting of the Housing Committee.

Simmons, vice mayor Marc McGovern and councillors Nadeem Mazen and Dennis Carlone all suggested they were strongly inclined to go to a 20 percent rate, “unless you make a very strong argument,” Simmons said. David Maher did not express an opinion, and Jan Devereux was absent.

Susan Schlesinger, chairwoman of the Affordable Housing Trust, also expressed frustration that the Chamber of Commerce had been asked to come back to the council with recommendations for what it would take to make the 20 percent rate work, be it changes to parking requirements, setback requirements, or other parts of zoning. Instead, the Chamber came with a different rate.

“We thought the development community would be able to bring forward some of those ideas,” Schlesinger said. “If that’s not the case, that is a different kind of thing.”

Schlesinger also asked the council to evaluate and provide feedback on an array of changes city staff had proposed, which had been intended as a topic of discussion at Monday’s meeting. Instead the bulk of the meeting focused on the Landwise presentation. Those recommendations are expected to be reviewed at the Aug. 30 meeting.

There have been suggestions that the inclusionary rate might not be one fixed number. During the meeting, Maher suggested that perhaps one rate might be used for cheaper woodframe construction used on smaller buildings, but a different rate might be applied for more expensive, taller concrete-and-steel buildings.

Marc McGovern stressed that he thought it would be politically infeasible for the council to vote to lower the inclusionary rate in the future, so he thought it was important to use a sufficiently well-supported number.

At public comment, Robert Winters suggested the inclusionary rate might be tied to a market indicator or index of some sort.

Chris Cotter, the city’s housing director, said that his staff and the Rosen consultants had looked at indexing the rate and were unable to find other cities where an index was used. “That’s certainly something we can look more thoroughly to see what the index might be, but there is no example that we’re aware of,” Cotter said.

Reardon, the assessor, said today that “You almost need to have a trigger on this. Is it tied to something? If cap rates are to increase, is there going to be an ability to continue? There should be some mechanism that allows for a clear reset if the economy changes.”

Asked if he had considered a “sunset” provision, whereby the inclusionary rate could drop back to a lower number in the future unless the council took action to extend it, Cotter said he was not sure of the legal implications, but had thought about the idea.

A sunset provision could be a way to avoid the political problem of asking a future City Council to lower the inclusionary housing rate, Reardon said.

This post was updated Aug. 16, 2016, to correct a quote by Jon Trementozzi of Landwise Advisors.