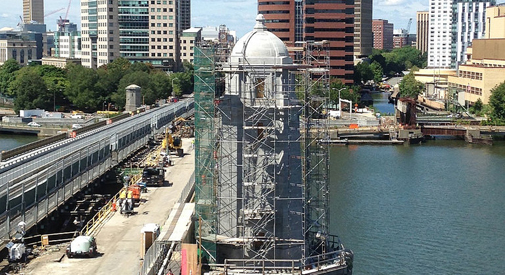 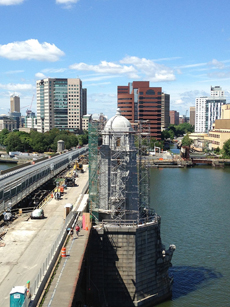 Work on the Longfellow Bridge is expected to continue at least until September 2018. (Photo: Department of Transportation)

Police are preparing residents for a steam pipe venting process – known as a “steam blow” – that in the past has brought emergency phone calls from worried members of the public.

The latest steam blow is to take place starting at about 7 a.m. Saturday and continue until all dirt and debris is removed from a pipe being used as part of the Longfellow Bridge Project. There will be one or two days in which there should be a cloud of ordinary steam and a low-frequency rumbling, police said Friday. All vehicle, pedestrian, bicycle and MBTA Red Line travel near the Charles Circle staging area will be halted for a short time at the start of the process, and police details will be present.

The primary location for the steam release is at the construction staging area in the parking lot across from the Charles/MGH red line station across the Charles River in Boston, but smaller vents of steam are expected to be visible at several smaller locations along the bridge. Dirt and debris will be collected before the steam is released into the air.

Past blows have brought large clouds of steam; one held May 30, 2015, happened to take place the same day as the fire that broke out at the Martin Luther King Jr. School project on Putnam Avenue, sending clouds of gray smoke billowing into the sky and causing millions of dollars in damage.

The flow of steam through the pipe to clean it will be supplied from Veolia’s Kendall Station generating plant on Land Boulevard in Cambridge. Veolia is owner of the district heating system in Cambridge and Boston and provides “green steam” to Kendall Square, which it says reduces carbon emissions equivalent to more than 52,000 cars per year.

Work on the historic bridge began in 2013 and was expected to be done this November. Now work is expected to continue until at least September 2018, potentially costing $303 million.

For questions or concerns, call the project hotline at (617) 519-9892 or send email to the project team here. For information about the project, click here.