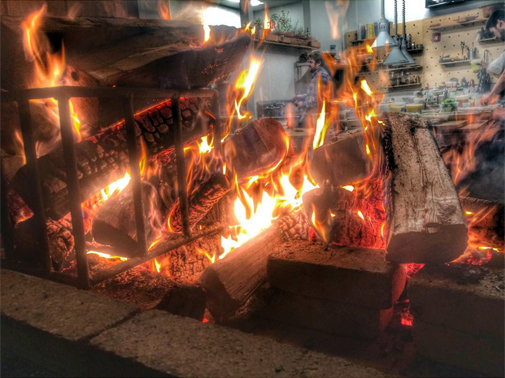 But Shepard, restaurant that sparked issue, is at risk, an owner says
By Marc Levy

The wood-fired oven at Shepard has helped enrapture customers and critics, but has the restaurant clashing with neighbors. (Photo: Shepard via Instagram)

Restaurateurs citywide don’t have to worry about a ban on wood-fired ovens, officials said, but that might not save the acclaimed Shepard. 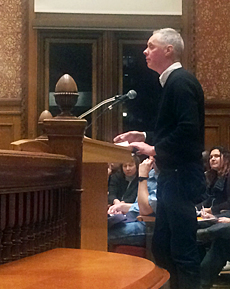 The closest neighbors to the 1 Shepard St. restaurant have complained of “unrelenting” choking smoke that has enflamed one case of asthma that’s been under control for decades and causes daily fits of coughing and burning lungs, and they say attempts by owners to address the situation with smoke-cleaning equipment have resulted mainly in more industrial noise.

On Monday, city councillors asked municipal departments to weigh in on how to regulate wood-fired ovens when there’s a threat to public health, and said the issue was also headed for a hearing held by the Public Health Department, tentatively scheduled for Nov. 16. The conversation sounded ominous to some.

“I’d like to make one thing clear: If Shepard is disallowed its wood-fired grill and oven, we will be forced to shut down and sell,” said Rene Becker, co-owner of the restaurant. Shepard opened less than 18 months ago, replacing Chez Henri, and its locally sourced, seasonal cuisine has drawn rapturous reviews, even being called among the best new eateries in America by Eater.

Until final adopted language was softened Monday before being sent off to the City Manager’s Office for action, a “ban” on wood-fired ovens was a possible result of the upcoming study.

“I was surprised and concerned by council discussion of a ban,” Becker said, referring to “at least a dozen restaurants” that would be affected, including the East Coast Grill, which has been in business in Inman Square for some three decades, Kendall Square’s Area Four (open since 2011) and Harvard Square’s Cambridge 1 (open since 2005).

Andy Husbands, a former East Coast Grill chef who opened the 150-seat Smoke Shop BBQ in Kendall Square in June, had a warning for the council: “We spent millions of dollars to open this restaurant, we employ hundreds of people and work at very small margins. Banning of wood cookery would mean we would close our doors immediately. And scrubbers would put us in financial ruins,” Husbands said.

Tom Brush, co-owner of Felipe’s in Harvard Square, spoke immediately after Becker during Monday’s council public comment period to urge councillors to consider the impact of a wood-firing restriction on restaurants – and tell them how diners on the rooftop deck he opened in February 2015 responded to being near the venting for his small, three-log wood-fired grill: “People absolutely love it. If anything, it really perks their appetite.”

Consultation with city staff made it clear that a City Council policy order couldn’t just target a single restaurant, councillor Jan Devereux said, but the conversation Monday also made it clear that Shepard – in a one-story structure from which wood smoke drifts upward to nearby two-story houses and a six-story apartment building – is the only one drawing complaints that would spark action. Becker was aware, and fired a spoken warning shot to city officials over “selective enforcement.”

Even some on the council were dismayed by the language in the original policy order, led by Jan Devereux, with David Maher calling it “inflammatory” and Mayor E. Denise Simmons saying that if a ban on wood-fired ovens wasn’t the order’s intention, “it was poorly written.” But the order was written carefully over the course of weeks in collaboration with the city solicitor, Health Department and other offices, Devereux and Craig Kelley explained.

It wasn’t the only mixed signal between the council and city staff. Becker outlined his response to affected neighbors, including installation of a powerful and expensive scrubber that eliminates 95 percent of the smoke particulate and half the smell, and said he was not only assured by former city manager Richard C. Rossi and the Health Department’s Sam Lipson that odor was not the issue, but quoted a February email sent him by Lipson: “Once the best available technology is selected and installed properly, I would absolutely agree that you should be released from the risk of further enforcement on the basis of odor and smoke.”

“We made every attempt to reduce and, more importantly, clean our exhaust,” Becker said. “We have done everything the city required and more, and now we’re being told it’s not enough.”

There was sympathy among councillors for his position, with Nadeem Mazen – a co-author of the original order with Devereux, Kelley and Dennis Carlone – acknowledged that installation and operation of industrial equipment can climb into the hundreds of thousands of dollars. Carlone mentioned the need to find a solution for a situation that “could escalate into legal suits no one wants.” The need for the city to behave predictably was also mentioned, after Becker noted that he and co-owner Susan Regis moved into 1 Shepard St. with no warning or restrictions on their cooking style from city officials.

Between the original motion and a substitution by Simmons, it was the mayor’s that prevailed, as with councillor Leland Cheung away for the night it seemed likely each would fail with 4-4 votes. Instead, Kelley said he would “blink first” and voted for the mayor’s rewriting.

The holdouts in the final 6-2 voter were Carlone and Toomey, the latter apparently disgruntled because his own amendment had failed to make it into the final version. Toomey had wanted the city to also study the health threat from residents’ wood-burning fireplaces. “I assume the residential [fireplace] would emit as much as a commercial [oven],” Toomey said.