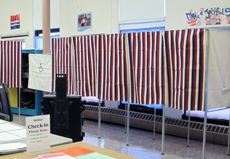 On the ninth of 11 days of early voting in Cambridge, there was turnout of 2,287 people at the city’s five polling places, making for a seven-day total of 14,958 citywide. The number of voters was higher than even the first day, when 2,240 ballots were cast – 47 fewer than Wednesday.

There are 71,370 registered voters this year in Cambridge (up from 63,325 last year), according to Election Commission figures lacking final mail-in registration figures, which puts the number of early voters in the city at 20.9 percent of everyone who could cast a ballot in the city.