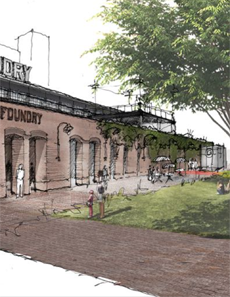 The city should put more money behind redeveloping the long-empty Foundry building and start over again on finding a better plan, the East Cambridge Planning team said. Members backed the decision unanimously at their Wednesday meeting.

The vote came after debate sparked by a presentation of a proposal by Graffito SP and the Cambridge Innovation Center, who together with Hacin + Associates make up the team selected Aug. 24. to lead the redevelopment project. Called Kendall Square Foundry Development Partners, it was the only group that wound up presenting a proposal; five other potential bidders dropped out.

East Cambridge residents and city councillors have long expressed concerns that the proposal from KS Foundry Development Partners does not provide enough benefit to the community to satisfy the purpose of the project. The Foundry, at 101 Rogers St., was deeded to the city as part of a development zoning deal that specified “a preference for its use for municipal or community uses [with] at least 10,000 square feet of which shall be devoted to educational, cultural or institutional uses.”

But the run-down, out-of-code building could take around $25 million to revitalize, and the current proposal fills much of the space with commercial uses while relying on a complex formula to reach its community benefits quota.

Still, if there were to be a new process, consensus at the meeting was that Kendall Square Foundry Development Partners would be strong contenders.

Back to square one

The bulk of the meeting’s discussion focused on the logistics of reopening a Request For Proposals and whether it was wise to do so. A significant appropriation of additional funds to the project would trigger a new process.

“It seems to me that the only black-or-white issue here is whether the RFP process has to be thrown out and reset and started again, or whether the existing process can be tinkered with,” said Chris Matthews, an executive board member of the East Cambridge residents group.

While Matthews was “nervous about going back to square one,” Tom Evans, executive director of the Cambridge Redevelopment Authority, noted that the process would not take as long the second time. “We could expect a calendar year of work,” Evans said. (In the previous process, the City Council set aside $6 million in funds for redevelopment in May 2015.)

The RFP would have to be rewritten, Evans said, but the current debate helped show how.

“We’ve got a better definition of what the interest is in,” Evans said. “We probably want to be a little bit more upfront about the governance process in the RFP, we also might even want to get a little bit better handle on some of the cost numbers, so we’d want to do a little bit more due diligence and make it a bit better.”

Councillor Nadeem Mazen suggested asking having applicants bid against each other, or soliciting low-, medium-, and high-cost proposals from each team to compare and choose among.

Evans reminded the group that a second RFP would require a newly identified funding source.

Mazen was optimistic that City Manager Louis A. DePasquale would appropriate additional city funds, saying at this point it made more sense than renting back space from the developer in a completed building, which he labeled “an order of magnitude difference in cost.”

Councillor Craig Kelly, though, had concerns. “People are talking about the city maybe being down $14 million in federal funds,” Kelly said, referring to President-elect Donald Trump’s pledge to defund sanctuary cities. “We don’t know what the future Washington administration is going to do to impact our finances and there is a risk, and if we revisit this we may find ourselves in a more awkward conversation down the line.”

The project’s momentum and reassurances provided at a council roundtable on sanctuary cities held Monday was reason to believe the project will move forward regardless of the new administration, Mazen said.

Mike Connolly, state representative-elect for Cambridge and Somerville, also pointed out that a rezoning agreement for the so-called MXD area in Kendall Square will create a revenue stream of approximately $50 million to the CRA – some of which, he suggested, could be used for this project.

There was also a “nuclear option,” Mazen said. By demolishing all or part of the Foundry building, developers would be able to build bigger, allowing for “more community space than all of the Foundry today would give us” while also letting them monetize part of the building to secure its solvency.

This suggestion was met with horror by some attendees who view the building as an important part of Cambridge history. A Nov. 22 petition filed by 11 residents of East Cambridge to designate the Foundry a Cambridge landmark may block the option entirely.

Further discussion of the Foundry is on the agenda for the council meeting coming Monday.