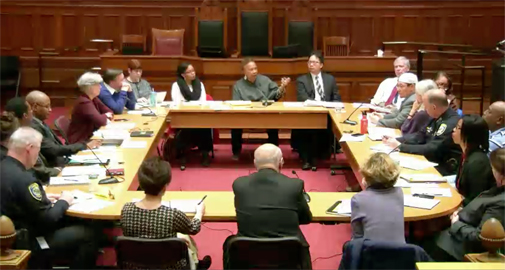 The city will lose approximately $14 million in direct costs out of its $575 million budget if President-elect Donald Trump follows through on a threat to strip sanctuary cities of federal funds, City Manager Louis A. DePasquale estimated Monday at a City Council roundtable. But residents and officials were told there was no cause to worry.

“We’ll work in the budget process to address the needs if this does happen,” DePasquale said.

“We’re not in this alone,” he reminded the roughly two dozen city, police and school officials who attended, as well as residents watching in person and by broadcast. “Somerville’s going to be affected by this. Boston’s going to be affected by this. So if it does happen, I think one of the first things we’ll do is work together with the other communities and come up with a plan. And whatever plan we come up with will preserve what we do in this city.”

Federal revenue-sharing cuts in the late 1970s and huge block grant cuts beginning in the late 1990s had similar impacts on the city’s budgets “and we figured it out,” said DePasquale, only recently appointed city manager after decades managing Cambridge finances.

School district money accounts for about $5.9 million of the total possible losses, said Superintendent Kenneth Salim, up from a $4.7 million estimate earlier in the month.

Much of the roundtable was spent discussing initiatives that could bolster Cambridge’s commitment to protecting and supporting undocumented immigrants.

Soliciting suggestions, Mayor E. Denise Simmons asked how residents could “become ambassadors” and ensure that undocumented immigrants become aware of and use the city’s resources and protections to the fullest.

“The past couple years, we’ve had a Republican-sponsored amendment to withdraw state funds from any city in the commonwealth that had sanctuary status,” said city councillor Tim Toomey, also a state representative.

While these resolutions have been so far unsuccessful, Toomey pointed out that state Rep. Geoff Diehl, a sponsor of the legislation, served as co-chairman of Trump’s campaign in Massachusetts and could capitalize on his access to the new president. With all three branches of federal government in Republican hands, Toomey said, “I’m just very nervous and very afraid.”

Councillor Jan Devereux reminded the council of a proposal by councillor Nadeem Mazen to hold community dinners as part of an effort “to figure out how to bring people together [and] to repair tears in the social fabric,” as well as convince people to seek out services if uncertain they’re safe to use. Mazen urged councillors to pass the measure, which was set aside when discussion became bogged down with questions about how to put the plan in action.

Imam Ismail Fenni, of the Islamic Society of Boston, suggested that the city might also consider reaching out to residents through posters in public areas. “Anything that would express what it is we are standing for, our understanding, our respect for one another, I think that would go a long way in establishing the atmosphere, in setting up the conversation amongst ourselves,” Fenni said.

The point about shaping the city’s atmosphere was well taken. Roundtable participants said they had already noticed a marked change toward minority groups.

“Even prior to the election, we saw an increased willingness on the part of individuals to express hateful things to our children and our staff,” said Ellen Semonoff, assistant city manager for human services, describing an incident during a beach outing this summer. A staff member leading the trip received many comments about her hijab, and negative comments were directed toward children on the trip, many of whom were “black and brown.”

Carolyn Turk, deputy superintendent of schools, said students young and old have expressed concerns about changing attitudes to minorities and immigrants in the city. “They could feel that there was something in the air,” Turk said, recounting visits to district schools since Election Day. “From our littlest ones, you would hear things like,  ‘Do you still like me?’”

“Immigration has not changed priorities at this moment. Their priorities are people with serious criminal records, people with multiple immigration violations, with previous deportation orders. They honestly do not have the resources to go chasing around after everyone who is here out of status at this point. So anyone who is out of status has the same risk as they had before the election, frankly.”

But with the number of hate crimes nationwide and even locally surging, Fenni said, it was clear Trump didn’t need to enact any laws to have an effect on immigrants.

Immigrants who had filed an application for legal rights of residency in the country were advised to carry a receipt of the filing with them at all times to avoid being picked up, detained and possibly deported.