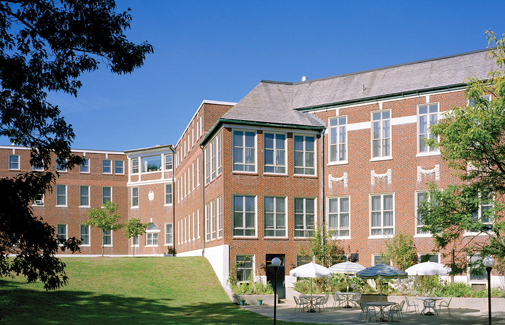 The 1999 renovation of the Neville Place Assisted Living complex, with its library, art gallery and community gardens, is included on a Trulia list of low-income housing that has lowered housing values in Cambridge. (Photo: Steffian Bradley Architects)

Low-income housing doesn’t hurt home values in high-cost areas – except in Cambridge and Boston, according to a national housing study of 20 such neighborhoods that was publicized widely a week ago, including an appearance on the New York Times’ website.

A closer look at the research raises questions about how well the finding reflects reality here, where the community has been united in seeking ways to add more affordable housing and news that its arrival lowers home values would be cause for raised eyebrows.

The study, performed by the online real estate firm Trulia, looked at the impact of 3,083 rental projects for low-income residents that reportedly opened their doors between 1996 and 2006. Trulia tracked home values in that decade – up to 10 years before and 10 years after each development opened. To estimate the effect of the projects, the research looked at changes in values within 2,000 feet of the development and a bit farther away, from 2,000 feet to 4,000 feet, before and after the opening.

“If there was an effect from the placement of a low-income housing project into a neighborhood, we would expect to see a drop in prices in the inner ring … compared to the outer ring … after the project is completed,” Trulia’s report said.

The details are not so clear cut, at least for Cambridge.

Starting with that very name, “Cambridge”: It turns out that Trulia used a government statistical area called a Metropolitan Division in its research, not the city of Cambridge, according to spokeswoman Cecilia Xia. That area includes the disparate communities of Waltham, Newton and Framingham as well as Cambridge.

Trulia identified low-income housing by looking at projects that received low-income housing tax credits, a popular vehicle for financing affordable housing, and were “placed in service” from 1996 to 2006. “While LIHTC projects do not cover the entire universe of affordable housing, they constitute the large majority of subsidized rental housing development in the nation,” the Trulia report said.

In Cambridge, though, those projects included the Neville Place Assisted Living complex, scarcely a conventional low-income housing project; it was built when the city renovated its Neville Place nursing home near Fresh Pond. The government database that Trulia used also listed properties that had already existed as low-income housing before 1996, such as the John F. Kennedy Apartments public housing development on Essex Street, and 808 Memorial Drive.

Cheryl Young, a senior economist for Trulia and author of the study, acknowledged that “we don’t have enough data at the Cambridge [city] level” to support any finding about the impact of low-income housing. “The Cambridge story, we don’t really know whether it’s necessarily true there” that neighboring values were lower than expected after a low-income housing project opened. She said Trulia used Metropolitan Divisions for its research because they contain more data and dealing with city boundaries can be complicated.

Looking at the four communities together, it was clear that values were lower near newly opened low-income housing than farther away, Young said. And combined data for all 20 high-cost areas showed no impact. “We are pretty comfortable saying [that] because the areas were so diverse,” she said, acknowledging that “exceptions” in the data, such as including projects such as Neville Place and existing low-income housing, probably existed in some of the other markets as well as Cambridge.

Trulia used its own proprietary value-per-square-foot data instead of actual housing prices in the study, Young said. Those figures have a 4.5 percent error rate, she said, but “we are working on improving that.” Trulia also plans to revisit the issue. For example, Trulia might examine what happens to nearby home values when an existing low-income project is renovated, she said.

The Trulia study can be viewed online here.