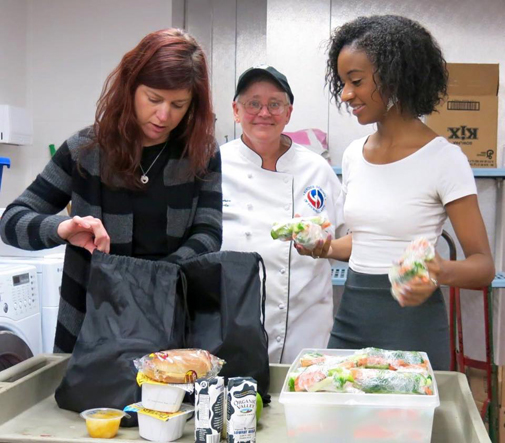 Alanna Mallon, founder of the Cambridge Weekend Backpack Program, packs a bag in 2015 with chef Cathy Thomas and Ashia Aubourg, an intern at the time.

The prized Weekend Backpack program, which sends home free meals for 475 students and siblings every Friday, got an unpleasant surprise Tuesday when Gov. Charlie Baker proposed eliminating state funding for the program.

At issue is a $110,000 earmark specifically to fund Cambridge’s program, which is run under the umbrella organization Food For Free. Decker, a Cambridge native who went to the city’s public schools and proudly includes “growing up in public housing” in her résumé, worked to get the earmark into the current year’s budget. This June, Baker vetoed the earmark, but Decker mustered a legislative override from colleagues.

Now, with this week’s fresh round of $18 million worth of cuts, the Food for Free earmark has specifically been eliminated in the $660,000 removed by Baker from the $17.6 million Emergency Food Assistance Program line item.

“Rep. Decker is working hard on this,” said Paul Fahey, of her staff. In general, he said, “there’s a lot of dissent” with this round of cuts, and Decker is strategizing with Speaker of the House Robert A. DeLeo on restoring the Food for Free money.

The whole group of cuts, representing about 1 percent of the current budget, has drawn sharp criticism from state Democrats, who argue they are unnecessary. Baker’s staff claim they are essential to offset a drop in expected revenue, but Democrats counter that the income drop is slight and, at 1 percent of the budget, could well correct itself by the end of the year. They also point to the fact that the cuts are overwhelmingly earmarks Baker tried to eliminate earlier, including HIV/AIDS prevention, rental housing subsidies and parks and recreation funds, along with the Weekend Backpack Program.

“Rep. Decker is very disappointed that this cut targets vulnerable people,” Fahey said. Especially in light of the previous week’s East Cambridge fire, he said, “this strikes her as tone deaf.”