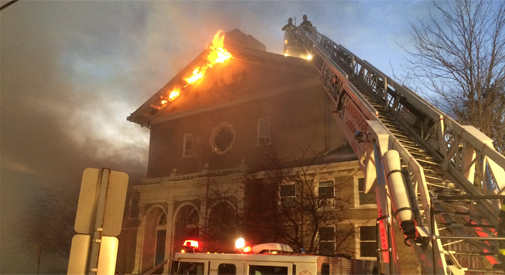 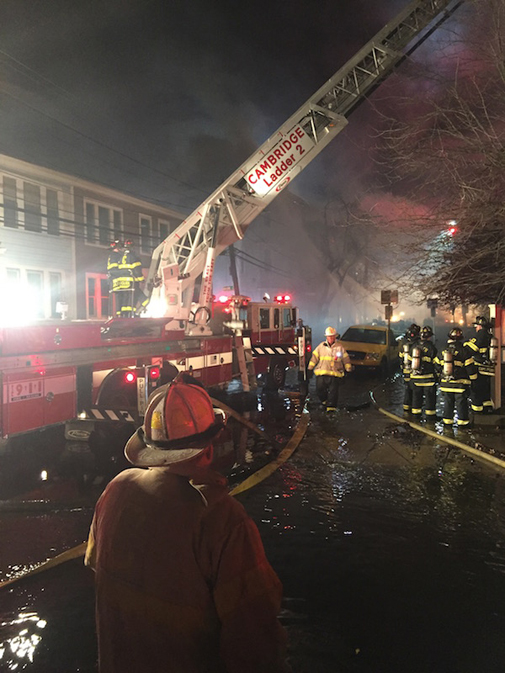 The view from firefighters’ staging location at of Berkshire and York streets in the Wellington-Harrington neighborhood Saturday night. (Photo: Mike Connolly) 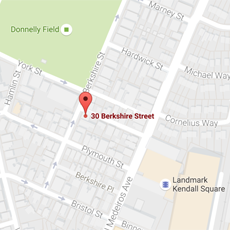 Firefighters from 17 communities joined with Cambridge to battle a 10-alarm fire that broke out just before 3 p.m. Saturday near 30 Berkshire St., in the Wellington-Harrington neighborhood near Kendall Square. According to published reports, the fire wasn’t fully contained until 8 p.m. by some 140 firefighters on the scene.

The fire started in a three-family home undergoing renovations and eventually consumed eight buildings, much of it affordable housing. It damaged seven more and destroyed several cars, but there were only minor injuries to a handful of people.

Three buildings are being torn down in Cambridge and at least one other will be partially razed for safety reasons, said Lee Gianetti, the city’s director of communications and community relations, in a Sunday email.

Officials called it the largest Cambridge fire since the 1980s. It was ‘‘miraculous’’ no one was killed, Fire Chief Gerald Reardon said.

The cause is still under investigation, officials said.

Initial estimates were that 60 people were displaced by the fire, but as of Sunday afternoon the Red Cross had registered 48 displaced families, representing 104 people – and more may yet come forward, Giannetti said. Many fled Saturday night to a center set up for victims at the War Memorial Center, where city officials met with them. Newly elected state Rep. Mike Connolly said he came to the center from a Massachusetts Peace Action conference at Simmons College after hearing news of the fire.

There were 25 Cambridge Rindge and Latin School families affected by the fire, some of whom were described as having lost “everything” at a Sunday meeting of the Friends of Cambridge Rindge and Latin School. Some had been placed in hotel rooms  if they had no family or friends to stay with, an attendee reported hearing from high school Principal Damon Smith, and the school district is arranging to get those students to and from school until they have permanent housing. 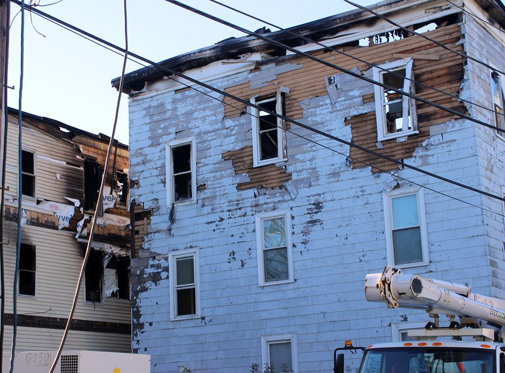 “We’re proud to say that we shattered that goal in less than 24 hours. Now, we’ve upped the goal,” Connolly said. “The need for assistance, support and affordable housing is enormous.”

“The city appreciates the numerous offers for volunteers and donations of physical assets; however, what is needed most is donations to the Mayor’s Fire Relief Fund. The city is currently not accepting physical donations,” said City Manager Louis A. DePasquale in a Sunday press release.

“The most important first step displaced families and individuals can take is to register with the Red Cross of Massachusetts,” he said, pointing people to Red Cross phone access at (800) 564-1234 and drop-in sessions:

Sunday from noon to 6 P.M. at the Frisoli Youth Center, 61 Willow St.

Tuesday from 8:30 a.m. to 5 p.m. at City Hall. The Fire Recovery Resource Center will be in place again during these hours. 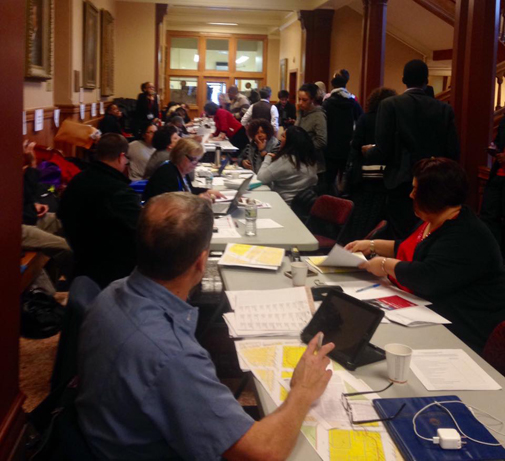 Allison Goldsberry contributed to this report.