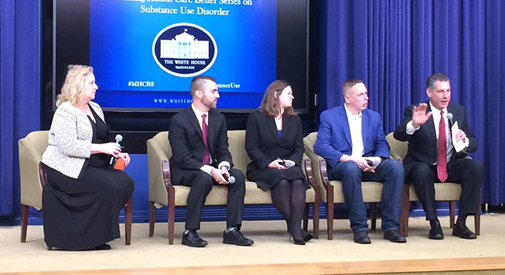 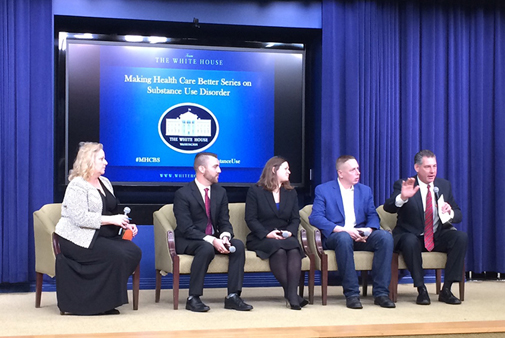 From the Middlesex Sheriff’s Office, Nov. 30, 2016: Middlesex Sheriff Peter J. Koutoujian joined leaders from across the country at the White House on Nov. 30 to discuss efforts to address substance use disorders.

The discussion was part of the White House’s “Making Health Care Better” Series, which has looked at progress made at improving the health care system during the Obama administration. The event included opening remarks from White House Office of National Drug Control Policy director Michael Botticelli, who discussed the need for those suffering from substance use disorders to be able to access treatment, as well as closing remarks from Agriculture Secretary Tom Vilsack, who talked about the impact of the opioid crisis on rural communities.

Koutoujian joined officials from the Pew Charitable Trusts, the Harm Reduction Coalition, the Legal Action Center and Vanderbilt University School of Medicine for a panel on “Advancing a Public Health and Public Safety Approach.”

“Last year, more than four in 10 people entering our custody at the Middlesex Jail & House of Correction required medical detoxification, and over 80 percent of those in our custody were identified to have a substance use disorder,” Koutoujian said.  “Thanks to President Obama, the Affordable Care Act and Medicaid expansion have created new and important opportunities for those returning to the community to immediately access treatment services, breaking down significant hurdles to successful reentry.”

Through the first 11 months of 2016, the Middlesex Sheriff’s Office has helped more than 350 people concluding their sentences apply for MassHealth, ensuring their ability to access care after release. That care and treatment includes participation in the MSO’s Medication Assisted Treatment And Directed Opioid Recovery program.

Matador is a six-month post-release program launched in October 2015 that incorporates the use of an injectable form of Naltrexone (a long-lasting, non-habit-forming medication that blocks the effects of opioids), substance use counseling/programming and continuity of care for participants upon return to the community. Forty people completed six months without a relapse  in the first year of the program.

The November event marked the third time in 2016 that Koutoujian spoke at the White House; he previously addressed an Office of National Drug Control Policy forum on medication-assisted treatment in June and the White House Forum on Disability and Criminal Justice in July.

“It is a tremendous honor to be invited to speak at the White House, and I want to thank the Administration for the opportunity to share our work,” Koutoujian said.