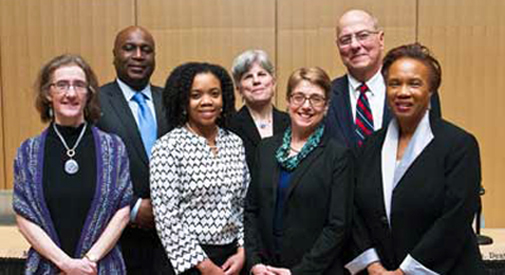 It was only in late December, during a look back at a tumultuous year, that we shook our collective head over how poorly the School Committee has been behaving as a group of adults supposedly versed in communications skills, let alone as a policy-setting body for the thousands of students, faculty and staff in the city’s public school district and a $173 million annual budget.

Pointing out that it was district students who crafted an improved dress code and led the way on making free feminine hygiene products available, pushing back against resistance and complications presented by committee and administration members, we said with some despair that “At this point, the district’s high school students are driving about as much policy as the School Committee. Seriously.”

That might have served as a reality check for an ordinary governing body, but Cambridge really has something extraordinary in its School Committee this term.

At the very next committee meeting, the first of the new year, members hardly resolved to work better. When Emily Dexter proposed (supported by members Patty Nolan and Manikka Bowman) a simple, sensible effort to provide child care at meetings and allow more parent involvement, the motion found astonishing resistance from Mayor E. Denise Simmons and others expressing concerns about allergies, costs and liability, as though these issues weren’t already answered and handled many times a year at meetings of other district bodies that provide child care.

What happened? Student committee member Mari Gashaw suggested that high school students training in child care would be happy to take on the responsibility.

Then the committee turned to Dexter’s request to gather data on the demographics of high school students in extracurricular activities, an effort estimated to take just over a single day of work and in line with new Superintendent Kenneth Salim’s stated strategic objectives, not to mention the committee’s own stated goals to “make data-informed decisions.” Yet Dexter got pushback from the mayor, member Richard Harding and Bowman, who looked at the proposal for data and wondered why the district would want actual information in the form of hard numbers: “What is our endgame?” Bowman asked.

What happened? Once again, the committee’s student members offered to let the high school’s student government handle the effort.

And incredibly, apparently unashamed, the committee voted unanimously to go that route.

As one parent said, the students are owed thanks for taking on the work of collecting data and writing a report for the School Committee – a paid body with paid staff working with similarly salaried staff in school administration – “despite the fact that they are very busy with finishing up the first half of their school year with upcoming projects, research papers, completing financial aid package forms, college applications and preparing for final exams.”

Can the School Committee manage to make it through a meeting acting like adults able to handle the responsibilities for which they’re paid by the taxpayers of Cambridge? It gets another chance at its meeting at 6 p.m. today at its 459 Broadway meeting room in Mid-Cambridge. Here’s the agenda for that meeting.