As adults on School Committee bicker, student members step in with solutions 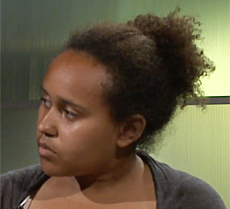 As adults on School Committee bicker, student members step in with solutions

The School Committee spent 1.5 hours at its first meeting of the year on two topics: whether to provide child care at a budget hearing, and whether to collect data on extracurricular participation at the high school. The first was sent eventually to a subcommittee; the second was saved by student committee members, who volunteered to take on the task and write a report.

The agenda was especially light, even with contract approvals and a motion by member Kathleen Kelly for an Early Childhood Education Task Force update, auguring well for the budget roundtable on special education scheduled to follow the regular meeting. But guided with punctilious care by Mayor E. Denise Simmons, deliberations on the two seemingly straightforward motions by member Emily Dexter swelled to fill the time, pushing the two-hour roundtable to an 8 p.m. start time. 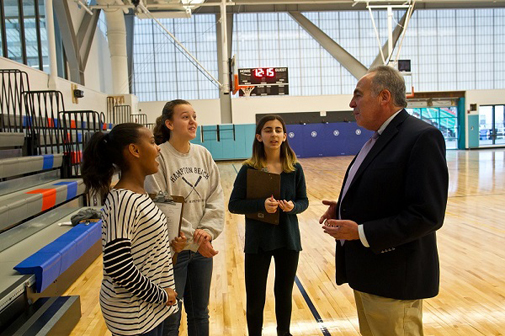 Then superintendent Jeff Young meets students in the gym at the newly opened Putnam Avenue Upper School in early 2016. Parents are seeking “extra resources” promised by Young for the school. (Photo: Bethany Versoy)

The meeting began tensely, with an exchange over public comment as a group of parents tried to speak about concerns at the Putnam Avenue Upper School. As soon as Michael Bellomo and Kimberly Mancino approached the microphone, Simmons asked “what item on the agenda” they intended to speak about. The school, she said, was not on the agenda.

“The Innovation Agenda,” answered Mancino, referring to a standing item on the initiative that broke district K-8 schools into elementary schools and middle schools. The item has been kept on the agenda “as a placeholder,” member Richard Harding has explained, to allow committee members and school administration to ask about related issues that arise. Several members have repeated over the years that the item also allows the public to address IA-related issues. Simmons, however, has made it clear she “would like to see that item go” – and suggests to Superintendent Kenneth Salim at each meeting that he “should feel free to make a motion to remove it,” to which he does not respond.

“The ‘Innovation Agenda,’” Simmons said, “has no topic under it.”

“We are going to speak anyway, because we are here,” Mancino pushed back.

“I am not going to stop you,” said Simmons, explaining she was sure another member would ask for rules suspension to allow them to speak, but still went on at length to repeat her regular explanation that this rule exists “to allow for transparency and public engagement” by giving notice to everyone which items will be discussed at a given meeting. At least twice during this exchange, member Patty Nolan tried to call attention to Simmons that she would move for rules suspension, with Simmons signaling her to wait. Immediately at the end of Simmons’ comments, she called on member Fred Fantini, who called for the rules suspension.

Simmons has been consistent that public comment must be related strictly to the written agenda. The practice under her predecessor, David Maher, was much more relaxed; exchanges between Simmons and members of the public wanting to talk about items not on the agenda happens regularly, but not always with such tension.

“We are deeply concerned with the state of our school,” parent Michelle Hicks said when allowed to go on several minutes later. Noting that recent state test results find the school “the lowest-performing in Cambridge by a wide margin” and “among the lowest performing in the state,” Hicks said the group is pressing for the “extra resources promised by [then-superintendent] Jeff Young” to their school in light of the extreme needs of the school as measured by income, special needs and behavioral issues.

“Our triad [of the Morse, Kennedy-Longfellow and King Schools] was the first one to support the IA,” Hicks said, but the promised school department support has been either ineffective or not realized. Teacher turnover, she said, is significant, with six of 12 core teachers new this year. The parents, who have met with school Principal Mirko Chardin, requested co-teaching (inclusion of a second teacher) for math and English “to allow a focus on teaching rather than discipline”; hiring of a family liaison; “robust summer programming” for remediation as well as additional academic challenge; and for committee members to visit to “try to understand what is going on.”

A letter to committee members asking for support garnered mixed responses, Hicks said. Fantini joined them in their initial meeting with Chardin and Deputy Superintendent Carolyn Turk; “Committee member Kathleen Kelly responded,” said Hicks, and Dexter “sent a thoughtful response”; they have not heard from other members, they said. Parents Mancino and Michelle Bean said afterward that they chose to speak publicly because they felt the public should know “what is going on” at PAUS, and also to make sure committee members and administration hear them. Chardin, they said, supported their committee appearance.

In the special education roundtable that followed the regular meeting, Assistant Superintendent of Student Service Victoria Greer explained that, after a period of similar struggle, co-teaching in all science, math, English and Social Studies classes has been installed at Vassal Lane Upper School. It has helped improve things greatly, and administrators “would like to expand this model across all schools.”

Child care at a public hearing 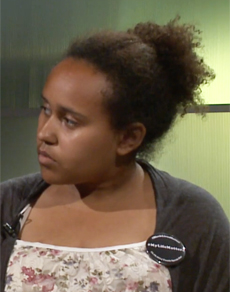 Mari Gashaw, a student member of the School Committee, seen in a 2015 appearance on Cambridge Community Television’s “Cambridge Uncovered.”

Dexter’s motion to provide childcare for the Jan. 17 public budget hearing had been postponed by Simmons on Dec. 20 because the budget co-chairs, Richard Harding and Kathleen Kelly, were not present. Though Harding entered the room immediately afterward, the motion was not revisited.

Nolan, who suggested broadening it to include other public hearings, noted that they had received a report by committee executive secretary Judy Martin outlining how is it done for groups such as the Family Resource Center and Citywide School Advisory Group. Martin suggested, depending on hours of child-care provision and numbers of children, the cost would be $80 to $100 for one meeting.

This was straightforward, Dexter, Nolan and Manikka Bowman said. “If it means more families can come, it is very much in line with our committee goals,” Nolan said.

Other members felt they had lots to discuss. Although child care exists for meetings across the district, some members seemed to struggle with logistics. Simmons and Kelly worried about food allergies if snack or dinner were included. Kelly and Simmons said they were not sure what the cost would be, despite Martin’s report to the committee Oct. 21 clearly outlining costs. Harding worried about “liabilities” and security checks for the workers. “If one kid has an issue, we will have consequences,” he warned. He wondered if this was the best mechanism for improving parent attendance at hearings.

When Bowman asked if referring to the subcommittee would jeopardize the possibility of child care by the Jan. 17 meeting, Simmons responded, “I can’t speak for them,” while sitting next to them, “but I don’t like planning by committee.”

“The date in the motion is for just one meeting,” Nolan said. “Every day we get 7,000 students walking into our buildings. Liability is something we deal with every day and every night. Even if just a few children come, it sets a standard that we are being family-friendly.”

“I don’t know what [Dexter] is talking about,” said Harding derisively, who had his microphone turned off but could be heard throughout the room.

“I hope no one thinks the School Committee is micro-aggressive,” said Simmons pointedly to Dexter.

Student member Mari Gashaw suggested that the Cambridge Rindge and Latin School students training in child care would probably take this on happily. Kelly moved to have the motion referred to the budget subcommittee “to work with Superintendent Salim on it.”

The other piece of business before the committee was another Dexter motion put off from the previous meeting, this one requesting a report on the demographics of students in high school extracurricular activities, citing the committee and administration desires to “make data-informed decisions” and the city’s desire “to provide equitable opportunities to learn.”

Tuesday night’s comments echoed the short discussion from Dec. 20, before the motion was calendared by Dexter to hear from Gashaw and budget co-chairs. Harding and Bowman wondered what the purpose was. “What is our endgame?” Bowman asked. “We can gather this information, but will this lead us to a place of ‘X’?”

Simmons agreed: “Yes. To what end?” She mused that “at our next retreat we could tease it out” and see if it matches any committee goals.

Dexter estimated that the entry of the data may take one day, and the analysis would take 30 minutes. Harding questioned this repeatedly, and he and Simmons and Bowman worried about the effort to collect data that may not be used. Salim later supported Dexter’s estimate of analysis time.

“It has been the lifework of the administration and we pride ourselves that every child has an opportunity to participate in” extracurricular activities, Fantini said, going on to list programs available to students. “But Ms. Dexter is right to the point that it is not documented.” He cautioned, though, that some students will not show participation because they need to go to jobs.

“I appreciate your enthusiasm,” Simmons said, “but I will not support this motion. I think there are things that are more important.”

After still more discussion, student member Gashaw interrupted by offering that the student government, of which she is a member, “take this on. We have already been asked by administration to look at school clubs.”

The other student member Paul Sullivan, also a CRLS student government member, agreed, and volunteered that he and Gashaw write a report.

The committee passed a motion to refer the motion to the student government through the superintendent, with the removal of a deadline, was passed unanimously.

Passed unanimously were contracts of $44,500 for out-of-district special education tuition and $27,420 for professional development for cultural proficiency at the high school, with Nolan pointing out that such contracts should have a per diem rate included. Also passed unanimously was acceptance of $50,500 in federal grants for English-language acquisition for immigrant students; a $17,900 grant for early literacy; $11,400 state award for arts programs at three schools; and $150 to Kennedy-Longfellow from Target’s charitable program.