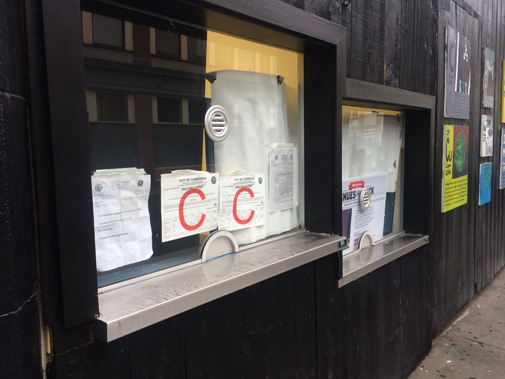 Sidewalk ticket windows have been installed as part of renovations to the former T.T. the Bear’s Place space in Central Square. The new club is to be called Sonia’s. (Photos: Marc Levy)

The opening of the nightclub Sonia’s in Central Square will likely take place in a matter of weeks, with a date set possibly by the end of January as the owners present the location for final permitting from city inspectors.

“The room’s going to be beautiful,” said co-owner Nabil Sater on Wednesday, as workers paused from setting up light and sound systems in the 10 Brookline St. property adjoining The Middle East and Zuzu restaurant and nightclub complex owned by Sater with his brother, Joseph. Sonia’s is named after their sister, who also works at the 472-480 Massachusetts Ave. businesses.

The 350-person capacity club will take the place of T.T. the Bear’s Place, at that location for 43 years until closing July 25, 2015, after a surge in rent that followed the Saters’ purchase of the property  for $7.1 million in December 2014. That brought accompanying sudden, gargantuan mortgage payments, leading to pressure on the business that was suddenly a tenant. “They had upped the rent $3,000. I was already paying $8,500,” T.T.’s owner Bonney Bouley said. “If you did the figures, you couldn’t fit enough people in there to pay the lease, what with all the other payments” such as liquor and utilities.

The Saters’ plans include renovations that can squeeze in 50 more people a night than Bouley’s floor plan allowed.

As Joseph Sater appeared before the License Commission in September 2015, demolition had already begun in the space and he said he expected it would be “three or four months” until Sonia’s was ready to open, likely in early 2016. But more than a year later, the family is still seeing to details from adding a sprinkler system under the stage and putting in alarms sounding directly at the fire department to adding a stage lift for people in wheelchairs.

“I wanted to open six months ago,” Nabil Sater said, but construction and permitting has been complex. “After Rhode Island, there have been a lot of new codes,” he said, referring to the 2003 fire at the West Warwick nightclub The Station, in which 100 people died after fireworks were set off by the band Great White.

The weathered French doors under the T.T. the Bear’s Place marquee – now blank, awaiting identification as “Sonia’s” – have been replaced by a set of see-through double doors, and a pair of ticket counters for sidewalk sales have been installed nearby. But Nabil Sater demurred when asked to show off the new interior space and said no opening-night lineup has been chosen for the new club, which will probably launch with a soft opening before spring.

Sonia’s will feature food from The Middle East, and be able to feature all-ages shows, as it will open without an alcohol license. That license is still held by Bouley, who received a three-month extension Jan. 11 from the License Commission to make a last-ditch effort to sell it. The three-member board voted unanimously for the additional time “in consideration of the 43 years you’ve been in Cambridge and had very few issues at all,” fire chief and member Gerald Reardon told her. 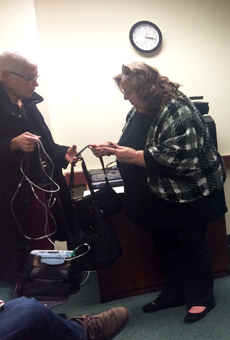 She’d been working with brokers nearly since the closing of T.T.’s, Bouley said, but sales were complicated by the Saters’ unwillingness to lease out the space they planned to turn into Sonia’s. Meanwhile, brokers had advised Bouley to keep the 117-seat license at a sale price of $225,000.

“I’d like to get it way down so it’s appealing to somebody,” she said.

While she planned to retain a broker during the three-month extension, she said she’d also be using her own network of contacts built during decades in the business to find potential buyers –  and even had a nibble immediately before her appearance before the commission.

“I actually just spoke with somebody an hour ago who’s interested in buying – for very little money. But I’d rather have very little money than zero, and I’ve already put $6,000 in fees into holding the license for a year and a half. Even gaining that back would be a plus,” Bouley told the commissioners. “I would obviously not be able to sell it for very much money, but I would like that opportunity.”

Left unmentioned was her own medical difficulties, which had led her former manager at T.T.’s, Kevin Patey, to crowdfund money to allow her to buy a lightweight breathing aid that would feed her oxygen and help her cope with her chronic obstructive pulmonary disease. The $2,600 device wasn’t covered by Medicare, Patey said, and with the alcohol license in limbo she couldn’t pay for it herself.

Within six days, though, the crowdfunding campaign had far surpassed the needed amount and Patey had shut it down. Among the 83 people contributing kind thoughts and memories and amounts from $10 to $100 were some notable names, including people identifying themselves as musicians Dave Aaronoff and the Gigolo Aunts.