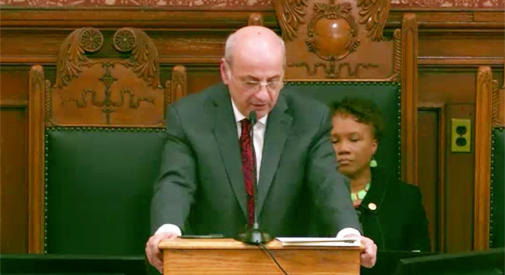 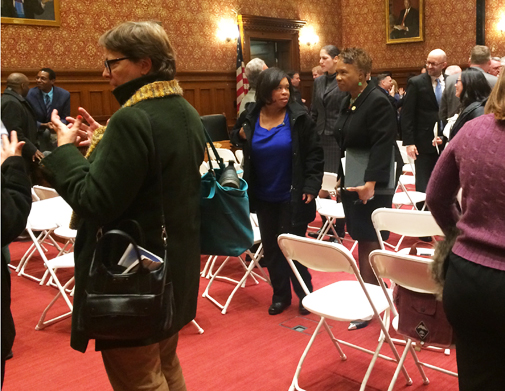 An affirmation of liberal principles and economic safety underlay much of the first-ever joint State of the City address, held Wednesday in a Sullivan Chamber at City Hall buzzing with the feel of a reunion as state representatives and senators mingled with former city manager Richard C. Rossi, teen hero Isaiah Robinson, neighborhood activists and other municipal movers and shakers.

“The city has not customarily done State of the City addresses, but we’re living in a time when customs need to be reassessed,” Mayor E. Denise Simmons said, explaining how she’d gone recently to new City Manager Louis A. DePasquale with a request to adapt to a new era: “I said, ‘What can we do that’s different?’ This is a real transition, this is new, how do we make some demonstration of that?”

The event played much like the annual summations seen at the state and national level, with looks at accomplishments and goals, a few laugh lines and plenty of opportunities for applause. Simmons and DePasquale pointed out work being done around the city and official comings and goings, including the departure of police commissioner Robert C. Haas and arrival of Superintendent Kenneth Salim and Director of Libraries Maria Taesil Hudson McCauley. The mayor reminded the audience of initiatives she has introduced or revived; DePasquale mentioned challenges ahead, such as keeping Kendall Square’s advantage as tech centers around the globe try to steal its innovative thunder (but NorthPoint will “take the pressure off”), MIT’s development of the 14-acre Volpe site and a second try at remaking the unused Foundry building (“we will explore every opportunity possible”).

But there were five themes that stood out at the event:

Standing up to Trump. With explicit nods to Cambridge’s diversity and its role issuing the nation’s first legal same-sex marriages May 17, 2004, Simmons said the city would stand up to the intolerance that seemed swept into office with President Donald Trump. “The opening two weeks of the administration has been seemingly targeting progressive communities like Cambridge,” Simmons said, referring to “penalties” such as the potential stripping of federal funds for acting as a sanctuary city for undocumented immigrants but vowing “outright defiance, when necessary” to remain “a beacon of tolerance, diversity and inclusivity … No one, not even the president of the United States, is going to bully Cambridge into not being who we are.” DePasquale received the loudest, longest applause of the night, and a standing ovation, for reiterating his assurance that the city would weather Trump’s threats. “I want to be clear: We are a sanctuary city, and will continue to promote the safety, health and well-being of all our residents, regardless of immigration status.”

Including the community. Simmons vowed that the coming year would see a number of town hall meetings where civic leaders “just sit and listen” to members of the community, including discussions on the intersection of race, class, gender and culture in the city “in the aftermath of the 2016 election,” as well as a focus on tenant rights.

Commitment to affordable housing. Accomplishments in affordable housing got a good sounding, including increased developer “linkage” fees and the current effort to raise inclusionary housing percentages to 20 from 11.5, which DePasquale said he endorsed, and the seizure of the decaying Vail Court property in Central Square, where the construction of affordable housing was being explored. Through the 2017 fiscal year, the city has appropriated $134 million in Community Preservation Act funds for affordable housing initiatives, and since 2005 has created 1,257 units of affordable housing and preserved another 1,139 – resulting in Cambridge hosting 15 percent of all units paid for by the act statewide. “No city in the commonwealth is as committed to affordable housing as Cambridge is,” DePasquale said, announcing he’d found yet another way to add to the diversity of housing stock: Putting an allocation of general fund money into his first budget as city manager – “the first time since the acceptance of the Community Preservation Act that a city manager’s budget submission seeks to allocate funds for affordable housing directly through the city capital budget from a dedicated general fund revenue source.”

Maintaining financial health. The city is expected to spend more than $300 million on capital projects in the next five years, including the start of construction on a new Tobin School to follow up on two other environmentally friendly school complexes – “expensive, but the right thing to do,” DePasquale said – made possible by the stellar financial health suggested by 17 years with top credit ratings and several years of record-setting free cash amounts. The “Healy, Rossi, DePasquale philosophy” is marked by fiscal stability and a commitment to provide services to residents, reliant on commercial growth that offsets residential tax increases, he said, referring to his predecessors as city manager. But DePasquale also said he would work this year with the city assessor, City Council and state Legislature “to explore and recommend potential improvements to our residential and commercial tax system.”

Noting successes. Simmons and DePasquale used Wednesday’s speeches as another opportunity to thank fire officials for extinguishing a 10-alarm Dec. 3 fire within five hours and with no loss of life, and to give an update on the generosity of citizens to the blaze’s 160 victims. Displaced residents have new affordable housing, they said, and a crowdsourced fund to ease their lives after losing their homes and property ultimately topped $1.2 million, of which $932,000 has already been distributed.