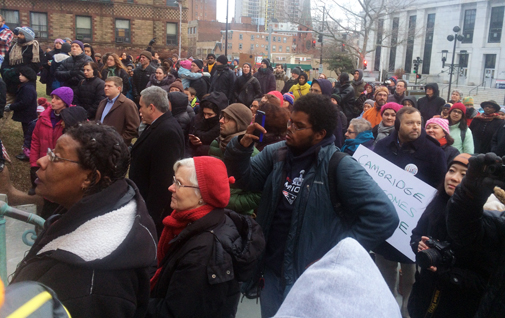 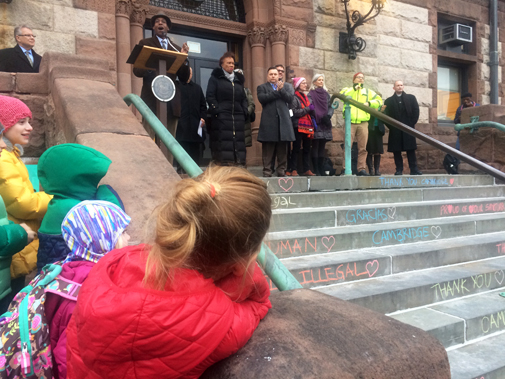 Protest songs and avowals of Cambridge’s continuing role as a safe haven for undocumented immigrants and others drew a few hundred residents and officials to City Hall on Monday, as Mayor E. Denise Simmons and vice mayor Marc McGovern held an afternoon Rally for Unity on the building’s front steps.

The event was a direct response to Trump administration policies that had unsettled residents of Cambridge and Somerville, which held a Saturday rally drawing nearly 5,000 people.

“The xenophobia and bigotry coming from our White House makes us feel less safe and has begun to pit us against each other. But communities like Cambridge, like Somerville, like Boston, are taking a stand and shouting ‘This is not who we are,’” Simmons said in an opening speech. “I was taught America was the country that was a melting pot. We were taught that we welcomed people from all corners of the globe, people who risked their lives to get here, to pass that lady that stands in the ocean and says ‘Please come here and you can be safe.’ As we are seeing that dream being rolled back, we will not send back any citizen, anybody who comes here to be safe. We will put up our own wall to keep people in and the bad people out.”

The Unity for Rally drew an estimated 300 people.

“Not on our watch”

McGovern took to the lectern after Simmons, giving an impassioned and rousing speech despite suffering from a stomach flu.

Addressing the crowd of an estimated 300 standing in the cold for the 4:30 p.m. rally, he called it “a powerful sight, but not a surprising one, because this is who we are – this is what we do. When our community, our country, our world is faced with injustice, racism, sexism, homophobia, xenophobia, we stand up and say ‘Not here, not on our watch.’”

Cambridge has a population estimated at 107,916, which includes 29,231 people who are foreign-born – 11,535 of whom have been naturalized and 17,696 of whom are not citizens, according to U.S. Census Bureau figures from surveys between 2011-15. Of those noncitizens, 922 were under the age of 18. (Noncitizens may be in the country legally, so these figures don’t indicate how many undocumented immigrants live in Cambridge. The Census Bureau does not ask legal status.)

Brian Corr, executive director of the city’s Peace Commission, led the event, and other speakers included City Manager Louis A. DePasquale, who reiterated Cambridge’s commitment to remaining a sanctuary city for undocumented immigrants despite threats from Trump of being stripped of federal funds, and School Committee member Kathleen Kelly, who affirmed Cambridge’s schools as a welcoming and and safe place for all students.

Other elected and appointed officials attended, including other city councillors and School Committee members, and state Rep. Mike Connolly joined them atop the steps of City Hall. Clergy were there as well, with Fred Small, former senior minister at First Parish in Cambridge, leading sing-alongs to open and close the event.

But along with the invocations of words by the Rev. Martin Luther King Jr. and President John F. Kennedy came a short speech from Nadeem Mazen, a city councillor and the first Muslim elected to a government post in Massachusetts, who reported that the Muslim community had recently been “under attack.”

“You would not believe the hate speech that our Muslim organizations and Muslim-American leaders are facing due to targeted attacks,” Mazen said, “simply for being Muslim.”

Mazen was himself a target of an innuendo-laden Breitbart.com article in December 2015, before the presidential campaign season that brought it new levels of infamy as a self-proclaimed platform for white supremacists. Now former editors for Breitbart are ensconced at the highest levels in the White House, led by Steve Bannon sitting on the National Security Council and serving as Trump’s chief strategist.

Mazen warned the audience to look out this week or the next for a White House executive order with “McCarthyist, Red Scare” overtones, a continuation of U.S. Sen. Ted Cruz’s efforts to promote a Muslim Brotherhood Terrorist Designation Act that asks “Are you working with Muslims? Are you or have you ever been affiliated with Muslim organizations?”

“Please be reaching out … please be affiliating yourself with more and more Muslim organizations,” Mazen told the crowd, “so you can proudly say, ‘I am affiliated, and we will not tolerate you branding them terrorists simply for being leaders in their community.’”

“We will continue to welcome people from every culture, every country, every ethnicity with tolerance, compassion and empathy. That is what we’ve always been, and it’s what we’re going to continue to be.”