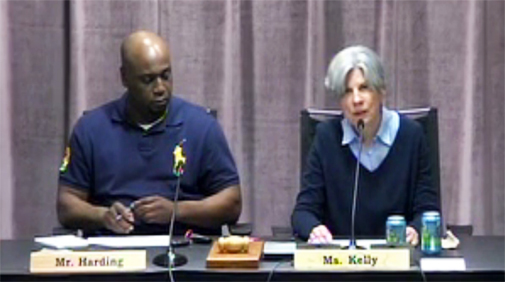 Nearly three months into the budget season, School Committee members listed their priorities in round robin-style Thursday, immediately after a public hearing. The topics were varied but often focused on providing stronger staff supports to students in and out of the classroom.

Setting the stage were eight “emerging priorities” in budgeting that Superintendent Kenneth Salim discussed in an untelevised Jan. 31 meeting. Though not presented Thursday, the report was in front of committee members, including: staffing for the Cambridge Rindge and Latin High School guidance department; support for the proposed “Level Up” program that would eliminate the honors and “college prep” tracks starting with ninth-grade English; providing Chromebooks to all high school students; improving social-emotional learning; recruitment and retention of teachers of color; special education supports; “cultural proficiency” across schools, staff and administration; and elementary world language instruction.

Members had mixed sentiments about implementing world language in the younger years. With a December presentation by Assistant Superintendent for Curriculum and Instruction Anda Adams, the district finally took a first crack at proposing how to fulfill a five-year promise to roll out language instruction in elementary schools. The proposal had not been shared with teachers at that point; a staff survey was sent out later.

Although survey results have not been made public, staff union president Dan Monahan and five teachers appeared just before this meeting to make the case against world language now, arguing that educator schedules were already too packed.

This resistance played out in some members’ discussions. Committee vice chairman Fred Fantini thanked Salim for finally taking on the topic, “through which we have learned that teachers have serious concerns.” Apparently won over by the staff arguments, he suggested “being creative,” including seeing if one or two schools could run pilot programs, or providing classes before or after school.

Mayor E. Denise Simmons, who had entered the committee room for only the last few minutes of one teacher’s testimony opposing elementary world language, said officials “should listen to our teachers. Why are we doing world language? We’re doing it because we said we would. But at what cost? … Is it for language attainment or for cultural enrichment?” She ended, though, by saying she would defer to the superintendent.

Budget co-chairwoman Kathleen Kelly steered clear of world language in her comments, though all members – especially she and fellow co-chairman Richard Harding – have ongoing private discussions and correspondence with administration on budget issues and don’t address all their concerns in public.

Harding invoked former colleague Mervan Osborne, whom he said called “monolinguism the illiteracy of the 21st century” and who was key in winning Harding over to supporting world language. “I hate to see conflict between educators and parents,” Harding said. “That’s what tears me most about the world language piece.” He left his stance ambiguous, saying “we need to plan it well, and also be honest with ourselves,” while urging Salim to take advantage of his first budget by “seizing the moment and being bold.”

Members Patty Nolan and Emily Dexter pushed back on the world language resistance. “It’s never a good time,” said Nolan, pointing to the ability and will to continue rolling out the time-intensive Kodaly music program facing similar constraints. “We made a commitment. We renewed it and renewed it and renewed it every year for five years. Hundreds of parents have come to us and trusted us that we would support it,” she said.

“It’s not just a feel-good notion,” she added, saying language instruction is tied to cultural competency, “21st century goals and our core commitments.”

Dexter pointed out that world language is considered by the state education department as a “core subject.”

“I’m baffled by the questions,” she said, “about what is the purpose of world language.” If we are wondering why we should teach language in elementary schools, she said, “we should be asking the same thing at the high school level or the middle school level. Why are we teaching it then? Our kids are not becoming fluent. Our programs are not excellent. We are doing the best we can because we know it is part of becoming an educated person.”

Fantini led off with a list of issues that had a focus on school culture, including support for many of Salim’s priorities. He continued his long-time advocacy for a full-time art teacher in each school, the Kodaly music and mindfulness programs in all schools, and broader access to state vocational programs (he said Cambridge uses only nine of 45 available programs). Fantini also supported issues raised in public hearings, including strengthening middle school after-school activities; improved advertising for the district’s language immersion programs and the continuation of Chinese immersion into middle schools; providing extra support to the Putnam Avenue Upper School, the lowest-performing district school; and a schools- and teacher-based approach to innovative thinking through a “Design Lab.”

Nolan added her support to extending Chinese immersion into the middle-school grades and supporting outreach for the Olá program, which she called “short dollars.” She also supported a $5,000 request from the CRLS Register Forum newspaper to increase circulation and said she “looked forward” to hearing updates on costs associated with launching the ninth-grade English “Level Up” program. She stressed the need to better help the Putnam Avenue Upper School, lobbied for by several parents at previous public hearings, particularly, she said, through increased summer math programs for all middle school students.

Referring to Fantini’s advocacy for universal full-time art teachers – he argued it was a matter of equity for each school to have a dedicated, full-time art teacher after the topic was brought to public hearings – Nolan pointed out that “equity” issues cut both ways. The district moved toward having part-time teachers in some smaller schools because it was deemed inequitable for art teachers in smaller schools to have considerably more unscheduled hours than those in larger schools, who may have no flex time at all, she said.

Dexter took a broader view of the budget, reiterating her stance that continuing to base each year’s budget on the previous year’s misses a chance to “start from the bottom up” – looking at what each classroom needs to succeed. Teachers, she said, have been asking consistently for more trained staff in the classroom. “I hope that’s where we are starting,” she said. Noting that she thinks the district is moving toward a “more wraparound model for all schools,” she added that “we are not increasing our budget at the level that would support that approach,” and argued that they should ask the city for a larger share of its budget. Dexter also wanted to see the school budget fully fund the Response to Intervention model that targets student support, rather than having it funded partly by individual School Improvement Funds, which she argues are intended to be ancillary creative funds.

Kelly supported a wraparound model that implied increased trained staff, and advocated that “the best teachers should be teaching in the schools with the most vulnerable population.” Like Nolan, she supported Level Up and adding guidance counselors, but said she would like to see the program extended into the middle schools. She stressed continued work on social-emotional learning and family engagement, adding a “dream goal” of dual certification for all teachers of content area and special education.

Harding stressed support of the upper schools, noting that the PAUS parents have been the most vocal but that all the schools need more focus; ensuring the Level Up program succeeds; increased guidance counselor staff and support for the Sheltered English Immersion program; and increased staff diversity – which he said may be more a “realignment” issue than a financial one. He targeted social-emotional learning, probably, he said, through “boots on the ground,” and urged that if co-teaching is the appropriate model, they needed to be clear and definitive about it. Harding also proposed a model he said some CRLS coaches are developing to provide academic support to players connected to practices. “This could be a game changer for these kids,” he said.

Simmons had a rather oblique approach. Along with her apparent concerns about world language, she dwelled on the “new era” resulting from changes in the White House, without explicitly using either Donald Trump’s name or his title as president. Noting that Cambridge’s designation as a sanctuary city could jeopardize around $14 million or more in federal funds – $5.9 million of which has been estimated by Salim to be in the school budget – she said, “I want us to have our budget conversations in the context of ‘what if’ those funds are lost. I was very gung-ho about community liaisons at our upper schools,” she said, “but [now] I don’t want it at the expense of coursework or teacher work or taking something from someone else.” Suggesting greater use of city organizations, she said, “we may have to start thinking differently.”

Dexter, though, responded that while the mayor “is sitting on two sides,” representing both the city and schools, the School Committee, she argued, does not do the same. “Our responsibility,” she said, “is not our entire city, it is to our kids. I hope we will be advocating for the resources for our schools system.”

Ending on a sour note

The group almost got through the hour without the interpersonal testiness that has marked much of this academic year but eased in the past few meetings led by Fantini, and in Kelly and Harding’s budget meetings. But when Dexter wanted to make her two-sides comment, joining each of the other members in giving a second round of comments, Kelly and Simmons resisted.

With everyone else having gone twice, Kelly was about to adjourn the meeting even with Dexter’s hand still raised. When Dexter asked if she could speak, Kelly said she had three minutes. As she started, Simmons – sitting next to her, as she was not chairing this meeting – immediately interrupted and said Dexter had to be brief. Thirty seconds into Dexter’s comments, Simmons stood up and put her coat on and started leaving. Dexter actually spoke by far the shortest time of all members – several minutes less than everyone but Kelly.

As with the previous year’s meeting, Manikka Bowman was not present. She did not respond to a request for comment.