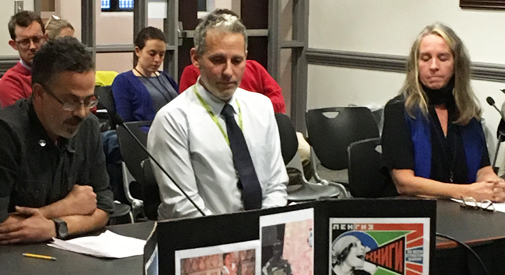 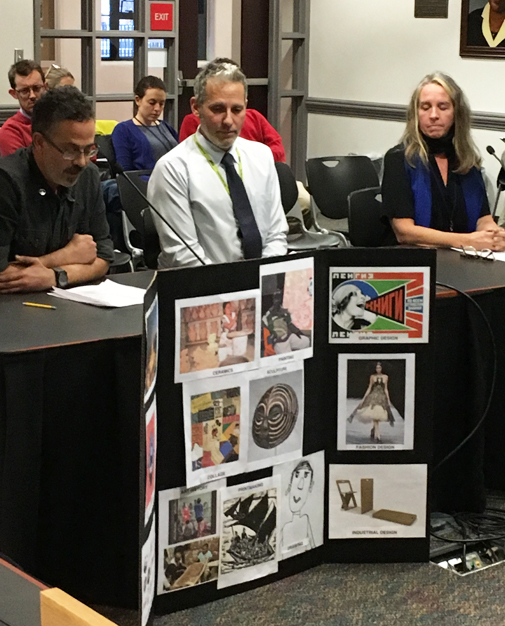 Educators pleaded for more staff in schools, infrastructure help in some “crumbling” buildings and updates for technology during a Wednesday budget hearing set aside to hear from teachers and staff. Though budget co-chairs Richard Harding and Kathleen Kelly worked with educator union head Dan Monahan to avoid major conflicts with other teacher events – unlike last year, when a union executive meeting was scheduled for the same time – turnout was still modest. Nine educators spoke.

For the budget season two years ago, then co-chairmen Harding and Mervyn Osborne made the unprecedented move to give educators their own hearing. More than 40 teachers and staff turned out to implore for “more hearts and hands” in the classroom. In the second year of the Innovation Agenda – which restructured the district by adding middle schools, aligning curriculum across schools and increasing professional development, assessments and other initiatives – educators filled the School Committee room with two hours of sometimes impassioned calls for help managing growth in social-emotional behavioral issues and relief from “relentless” initiatives pulling them away from classrooms.

In the months following, large groups of educators, sometimes armed with petitions or signs, sometimes represented by union leadership, appeared at hearings and public comment periods to underline the requests. But the February 2016 educators’ budget hearing saw a huge drop in numbers: Ten educators spoke, most repeating their pleas of the previous year. David Albert, a veteran instructional technology specialist at the Amigos School, suggested reasons: “It is very, very hard to come here again and again to put forth the needs of our communities, our students and our families, only to see little change.”

Monahan led the comments Wednesday by thanking the educators for appearing, as well as Superintendent Kenneth Salim, who is facing his first Cambridge budget season, “for his interest in hearing the educator voice, not just through this meeting but in many other ways.”

Acknowledging that some staff still feel “discouraged from speaking,” Monahan said that he is working with the committee and administration to “make the process both safe and deeply engaging for educators.”

“In every school in this city there are classrooms that cry out for additional teaching support in the classroom,” Albert said Wednesday, seeking “not more professional development that takes teachers away from the classroom. Not more pull-outs that take students away from the classroom environment.” Referring to the 2014 plea for “more hands and hearts,” Albert said, “we can be more specific” and called for an expansion of co-teaching by experienced, licensed teachers, now successfully being used in some sixth-grade math classes. “Other classes need full-time paraprofessionals. Paraprofessional hours were cut drastically over the last 20 years, but starting at just the time when the social and emotional needs of our students were dramatically increasing.”

“I don’t think the issue is money,” Albert said. “I think the issue is that despite the testimony of many educators, the need is not uniformly perceived as real and pressing.” He invited committee members to visit the schools if they have any doubts.

Graham & Parks School teachers Rose Levine and Karen Engels – who, like Albert, have testified regularly to the committee since 2014 – appeared together to say their “top priority is people and staffing.” The paraprofessional interventionists they said were critical to addressing social-emotional needs of students are funded largely by a school-based School Improvement budget meant to aid goals specific to individual schools. Levine wanted more interventionists and counseling services; their one counselor is stretched thin with 400 students and “has very little time” for students without special education designations.

Levine and Engels, who said their statement represented staff across their entire school, asked for a full-time family liaison for a Sheltered English Immersion program and more translation services to better reach more families. Finally, “many of our special educators have extremely high caseloads and travel to multiple buildings,” Levine said.

Cambridge Rindge and Latin School math teacher Ross Benson and biology teacher Barbara Dorritie said, flat out, “we need more staff.” Student population has risen to roughly 2,000 students from 1,500 in his 11-year tenure while classroom student caps shrank to 24 from 30 – “which is really good in terms of classroom management,” but has gotten to the point where the math and science departments are turning students away from classes, he said. The Moving Up math program, aimed at getting so-called “college prep” students ready for an honors-level class in the spring, lacks room and teaching staff for 60 kids. “We are waiting to hear” on an extended-term substitute to accommodate them, he said.

“There is no give in the schedule,” Benson said. When students need to make schedule changes – because they are now ready for honors, or their needs or interests change over the summer or because there’s a mistake – most classes are closed to new students. “We often turn students away from science classes,” said Dorritie, offering to provide lists of students who have been shut out. In one case, an entire section of one science elective was canceled to let the teacher lead an additional core science class, she said.

Principal Damon Smith has argued before the committee that 95 percent of students get their “primary choice” for core classes and electives. “What you may hear about students not getting their first choice,” he said in an untelevised December roundtable on high school staffing, “refers to the time-of-day and -semester requests.” He said that “most often” it meant that students electives were grouped in one semester, with no elective in the other, for example. Benson and Dorritie said afterward that they have trouble understanding how that jibes with their data and experience.

Dorritie, a 23-year veteran teacher, said also that science class equipment and space is limiting access, and that the CRLS building was renovated six years ago to high standards, but for a high school population at its dip. Albert urged officials to address the “far too many spaces that at times are not fit for human habitation” in some schools, and to end a system of deferred maintenance.

Engels bemoaned the state of technology in the schools. “There’s a gap between the expectation of how we use technology and the reality,” she said, including too few Chromebooks for students to support all the expected uses. Her own Smartboard was out of service for a long time; now that she has a working one, her computer is “not modern enough to interact with it.”

Additionally, the library of materials teachers have built up over the years for old curriculum are now unusable, and there are no funds for substitutes, Engels said. Prohibitively expensive use of school buses (at $1,200 for one day per bus) curtails field trips.

Three art teachers appeared together to plead for full-time instructors for all schools. Leo Muellner said last year’s budget ensured seven of the 12 elementary schools and all upper schools have full-time art teachers and urged that the remaining schools get full-time art instruction this year, stressing that offering full-time positions improves the quality of applicants.

Angie UyHam, a literacy coach, spoke of her work on education planning. After a sabbatical studying “design thinking,” or how to apply the creative problem-solving of physical designers to other disciplines, UyHam created a successful professional development program called the Design Lab. Currently without formal funding, UyHam urged the committee and administration to consider expanding this approach for “an internal mechanism for ongoing intervention.” Tracy DeLucia, a Cambridgeport literacy interventionist and a 17-year Cambridge staff member, said the project she worked on with UyHam “is the most incredible professional development I have taken in a really long time.”