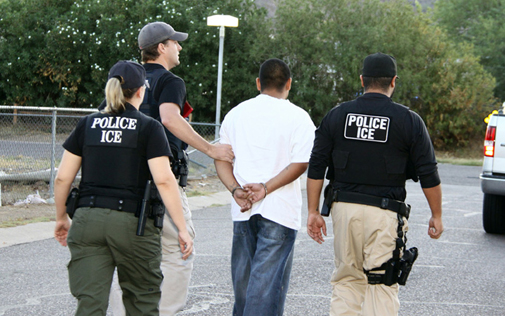 President Donald Trump has made good on a campaign promise to take action against sanctuary cities such as Cambridge, signing an executive order Wednesday on “Enhancing Public Safety in the Interior of the United States” that, among other provisions, threatens to strip them of federal funding.

Cambridge became a sanctuary city for undocumented immigrants in 1985 in response to an influx of refugees from El Salvador, reaffirmed the commitment in 2006 and added Trust Act status two years ago – officially adopting a stance that it would “no longer hold immigrants in detention for the sole purpose of deportation.”

Trump’s order aims to “ensure that jurisdictions that fail to comply with applicable federal law do not receive federal funds, except as mandated by law,” but Laura Rótolo, staff counsel at the ACLU of Massachusetts, said it’s not so simple.

“Even if Cambridge is targeted as a sanctuary city,” she said, “I don’t see anything in Cambridge’s June 2014 Resolution that gives reason to believe that Cambridge is violating federal law.”

She pointed to one federal law the executive order cites focused on communications between the Immigration and Naturalization Services and other government agencies: “Notwithstanding any other provision of federal, state or local law, a federal, state or local government entity or official may not prohibit, or in any way restrict, any government entity or official from sending to, or receiving from, the Immigration and Naturalization Service information regarding the citizenship or immigration status, lawful or unlawful, of any individual.”

But Cambridge’s 2014 policy order says nothing about the restriction of communications between the city and INS. It states simply that “only in cases where immigration agents have a criminal warrant, or Cambridge officials have a legitimate law enforcement purpose not related to immigration, will Cambridge Police comply with federal ICE detainer requests to hold persons solely for immigration purposes.”

“Further, we don’t believe Trump has the legal authority to carry out this order,” Rótolo said, citing 10th Amendment protections of state sovereignty. “If that threat were carried out, it’s possible it could be struck down as unconstitutional.”

Vice mayor of Marc McGovern agreed. “It isn’t clear that the president has the authority to do what he is saying he has to do.” he said.

One of many challenges

While reiterating Cambridge’s commitment to remaining a sanctuary city, McGovern pointed out that this issue is just one of many challenges bound to arise in the coming months. “What worries me is not just the sanctuary city part, and whether or not he can take money away, but it is just his whole administration. When you look at who he’s putting in cabinet positions, what’s going to happen to HUD money for affordable housing with Carson there? What’s going to happen to money for education with DeVos there?” Former presidential candidate Ben Carson is on track to lead Trump’s Department of Housing and Urban Development; the president has nominated Betsy DeVos, a billionaire businesswoman, to lead the Department of Education.

Early estimates suggest about $14 million in federal funds is at stake should Trump target Cambridge as a sanctuary city. McGovern suggested much more could be at stake “if you’re talking about cuts to nonprofits, cuts to Cambridge Health Alliance, cuts to HUD, cuts to education.”

City Manager Louis A. DePasquale pledged during a Nov. 28 City Council roundtable his commitment to making up the funds Cambridge might lose. In Somerville, which could lose about $12 million annually, Mayor Joseph A. Curtatone has also vowed to resist attacks on sanctuary city status.

“We’re going to have to really think strategically about how we’re going to fund these programs at least for the next four years,” McGovern said. “The people who are going to be most adversely affected are the people who are the most vulnerable in our community, and we have to step up as a municipality and as local leaders, because we’re not going to get help out of the White House.”