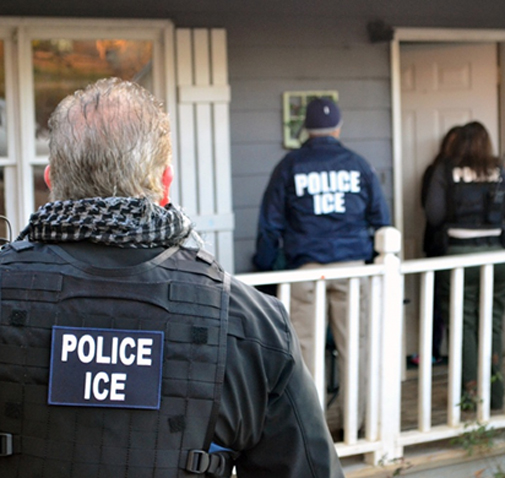 Reports of immigration raids swirled nationally over the weekend, even in the sanctuary cities of Cambridge and Somerville, but no undocumented immigrants were taken locally.

“There is a lot of rumor, but it is just that,” said Emmanuel “Manny” Lusardi, liaison for immigrant affairs to the office of vice mayor Marc McGovern.

A dozen states saw arrests of some 680 immigrants last week, and one exceptionally high-profile surprise deportation in Arizona, where a mother of two teens was taken from a routine check-in and forced to leave the country amid protests. President Donald Trump tweeted that the actions were “the keeping of my campaign promise,” though the Department of Homeland Security said agents were following routine in “a series of targeted enforcement operations across the country [against] public safety threats.”

Carl Williams, staff attorney at the American Civil Liberties Union of Massachusetts, agreed that “what is happening around the country currently are not raids,” comparing the specific enforcement of deportation orders to the George W. Bush-era roundups that took place in factories and other locations targeted because of their potentially high numbers of undocumented immigrants.

“These fears are real”

Still, Lusardi said he has heard concerns from many of the undocumented in Cambridge, some percentage of the 17,696 non-citizens reported to live here in the most recent U.S. Census Bureau American Community Survey.

City councillors, School Committee members and state representatives for Cambridge talked over the weekend about potential responses to raids, and Lusardi reached out to the community via Facebook as soon as it was confirmed that neither Cambridge nor Somerville were seeing immigration actions. In Somerville, where there were rumors of undocumented workers being taken from a Mexican restaurant near Davis Square, alderman Matt McLaughlin did the same.

Though there were no arrests locally last week, “these fears are real, it’s not imagined,” Lusardi said.

Some families have been trying to raise money in the event that they might require legal services. Cambridge officials are mulling the idea of creating a legal fund to provide aid to those who cannot afford legal representation, Lusardi said.

Amid these fears, law enforcement in Cambridge has set out to allay concerns. Jeremy Warnick, director of communications and media relations for Cambridge police, reiterated in an emailed statement that “the Cambridge Police Department does not arrest individuals for violations of federal immigration laws.”

“CPD does not transport individuals to [Immigration and Customs Enforcement] or other federal agencies for immigration enforcement purposes,” Warnick said. The department limits cooperation with the federal government to “scenarios involving high-risk offenders.”

While local police may not aid in immigration enforcement, it is legal for ICE and other federal agencies to come into a sanctuary city such as Cambridge and enforce deportation orders, Williams said.

Lusardi listed a variety of resources and actions available to citizens to organize and uphold Cambridge’s commitment to remaining a sanctuary for undocumented immigrants.

He suggested concerned residents get involved with the Immigrant Advocacy Group of Cambridge or the Massachusetts Immigrant and Refugee Advocacy Coalition and support the Massachusetts Safe Communities Act coming before the Legislature, which seeks to enact sanctuary protections statewide.

Lusardi also invited residents to connect with him in his capacity as the liaison for immigrant affairs by calling the vice mayor’s office at (617) 349-4264 “if they’re afraid, if they want to talk to somebody or if they need any kind of help.”

Warnick encouraged residents “to seek and obtain assistance from the many resources available to the Cambridge community, including police assistance and protection, regardless of their specific immigration and/or documentation status.”

Cambridge police have increased outreach efforts to immigrant populations in the city, Warnick said. There are two upcoming opportunities to discuss concerns directly with the department: at 6 p.m. Feb. 27 in the Media Cafeteria of Cambridge Rindge and Latin School, 459 Broadway, Mid-Cambridge; and 6 p.m. March 9 at the Kennedy-Longfellow School., 158 Spring St., East Cambridge.

“People should get organized in their communities, they should understand who their allies are,” Williams said. “People being organized to resist this will ultimately win. If we are not organized, we will lose.”

The civil liberties group has general advice for people contacted by immigration agents: 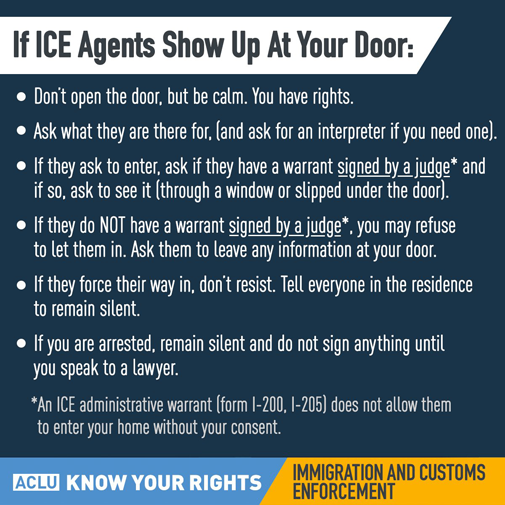 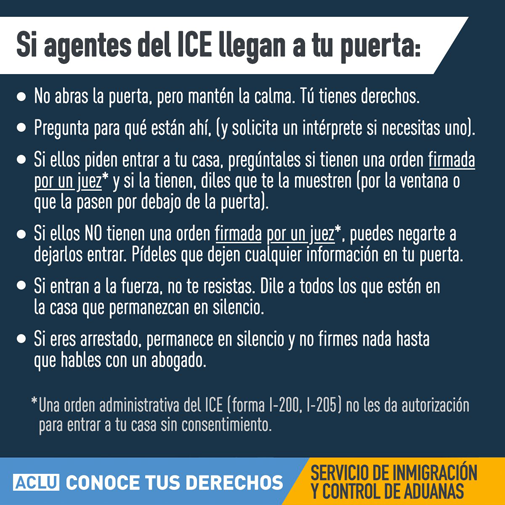