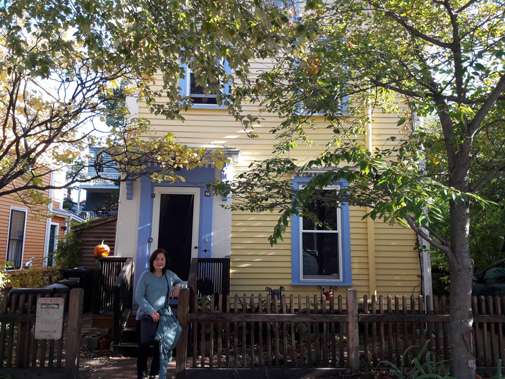 A visitor shows off her Airbnb in Cambridge in an October photo posted to Facebook.

A petition filed Monday to set rules for Airbnb hosts drew suspicion and anger rather than support, with city councillors signaling that they would take care to avoid what they considered a trick to delay legitimate regulations from being passed.

The petition, signed by around 30 people, had the bad luck of appearing on the same City Council agenda as a move to increase how much affordable housing must be included in large residential projects, with several people noting the juxtaposition during public comment – that Airbnb was taking housing off the market to rent to tourists while officials were working to guarantee more housing for lower-income, long-term residents.

Even Airbnb users and operators opposed the petition. Carolyn Fuller, a Douglas Street resident who said she hosted travelers using the system, urged the council to defeat it and “do all in its power to protect our long-term rental market” from commercial operators of multiple properties using Airbnb or similar companies.

Many people also made clear that rejection should be easy, with Fuller calling the petition’s definitions “so vague as to include almost any rental, and no time period is provided,” with one portion “so poorly written that I cannot determine what it impacts.”

But when councillors took up the matter later – after some two dozen speakers overwhelmingly expressed opposition to the petition – an outright rejection looked like the last thing they wanted to do. City officials are working on writing their own short-term rental regulations, aimed at allowing citizens to do small-scale rentals to supplement their income without doing harm to a neighborhood, and handling one petition the wrong way could conceivably block another from being considered.

“I don’t want two dueling petitions out there,” councillor Craig Kelley said, asking advice from the city clerk to “keep things from getting too gummed up.”

The risk: If the Planning Board advises against passing the petition and the City Council follows that advice and rejects it, zoning law says no very similar petition could be considered for two years, City Clerk Donna Lopez explained – meaning that for the council to consider city officials’ own petition, its members would have to avoid voting on the competing language presented Monday.

“If the City Council just let the petition expire due to expiration of time limit, that’s not considered a negative report,” Lopez said. “Another petition could be submitted.”

Several people said that what was presented as a citizens petition was a sham perpetrated by Airbnb with the help of the Novus Group, a lobbying firm – including Kelley, in an email to constituents.

“This opens the unsettling implication that our citizen petition process, something at the very core of local governance, has been commandeered by a multinational, privately held company for corporate purposes. This sort of large-scale commercially sponsored legislation is simply unacceptable in our city,” Kelley said.

Another city councillor called the petition a misfire that drew about three dozen emails angry about what seemed like a misrepresentation. Several residents expressed that anger during public comment as well.

“I’m very concerned that a citizen petition has essentially been filed by a corporation using a very powerful consulting group. It does seem like an abuse of the citizen petition process,” said Nancy Ryan, chairwoman of the Cambridge Residents Alliance. “Corporations don’t get to file citizens petitions in Cambridge.”

Not a single signer of the citizens petition signed up to speak to the council in its favor.

Airbnb and The Novus Group have been contacted with requests for information and comment on the petition.

“Cambridge, like Boston and many other communities throughout the Commonwealth, is being overrun by illegal hotels that contribute to exploding housing costs, disturb residential neighborhoods, lack basic health, safety and anti-discrimination regulations and don’t pay a penny in taxes. As we heard at tonight’s hearing, the people of Cambridge overwhelmingly oppose the Airbnb-sponsored petition which puts their own interests far above those of the people of the city.”

The council’s Ordinance Committee is scheduled to to hold a hearing April 4 on short-term rentals. The petition presented Monday, which was officially accepted and placed on file, is not a part of that hearing, Lopez said.