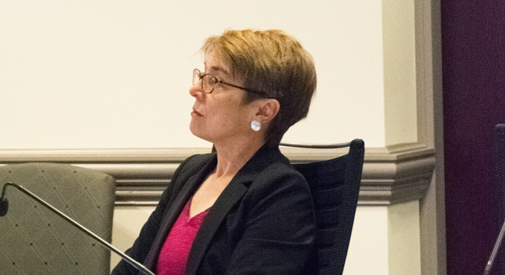 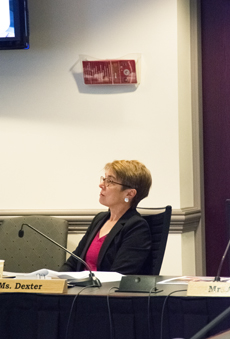 School Committee member Emily Dexter, who found a motion on class sizes made Tuesday to be controversial. (Photo: Ceilidh Yurenka)

A motion to cap certain class sizes ballooned somehow into an emotional referendum on an entire program Tuesday, with School Committee members declaiming about staff morale and student “labels.”

Though the agenda was brief, sandwiched between budget matters, members still got impassioned, testy and well beyond the topic over nearly 40 minutes examining a policy to limit class size for Level Up, the plan to have all Cambridge Rindge and Latin High School ninth-graders take honors English next year.

A motion by Emily Dexter suggested the classes enroll “no more than 18 students, or will be co-taught by two teachers assigned full-time to the class.” Likewise, she wrote, the new Honors Access support classes would be no more than 16 students – around the numbers requested by high school Principal Damon Smith.

“I don’t see this as primarily a budget issue, I see this as a policy issue about creating learning environments,” Dexter said. “[Level Up] is one of the most important things we have on the table for next year. My goal is for us through policy to make sure we are fully supporting [staff’s] vision.”

Member Patty Nolan generally supported the motion, though she preferred the numbers be goals.

Asked by member Fred Fantini for his thoughts, Superintendent Kenneth Salim said he had “concerns [that] starting with hard caps have unintended consequences,” given the complications of balancing schedules for 500 incoming first-year students.

But some School Committee members objected, many strongly, some objections going so far afield that for some the final vote became a referendum on the entire Level Up program.

A matter of trust

“I’m inclined not to support this,” member Kathleen Kelly said. “We’ve had a great deal of discussion on [Level Up] through the budget process. As I’ve commented previously, I am entrusting to the superintendent, to the district leadership and to Principal Smith and teachers … who have been working on this.”

The Level Up program has been discussed, often at length, in three meetings: a November meeting at which Smith was asked to outline the project because rising ninth-grade parents were worried about rumors heard while on school tours; a January curriculum subcommittee meeting, chaired by Kelly, with an update on planning; and a further update and discussion at an untelevised February budget retreat.

In addition, on Feb. 7 there was a joint motion by Dexter and Nolan requesting a report on the plan’s “anticipated outcomes and measures of success” calendared because Smith was due to give another program update right after that meeting. The motion was taken up again at the next meeting, March 7, drawing long discussion with a majority arguing that it was “micromanaging” and inappropriate for the committee to address. That motion was tabled by Fantini.

On Tuesday, Fantini also said he wouldn’t support Dexter’s motion, though he said there were “some good points in it that the superintendent may want to adopt.” Ultimately, though, he favored giving the superintendent “flexibility.” “We don’t want to get ahead of planning,” he said.

Member Richard Harding said, “we’ve had this conversation ad nauseam. Some of this is comes down to having a little faith in the people who have developed this.” He worried about the “message to the staff” and how it would affect morale. He said Smith had “come voluntarily with the 18-student ‘cap.’”

Smith and staff may have considered smaller classes – usually capped at 24 – but the first time smaller class size was mentioned publicly was when Dexter urged it in a January meeting.

“We need to figure out a way to let this one go and … let us watch the success with glossy eyes,” Harding said. “It’s high time that we allow [Smith and Dean Tanya Milner] to work their magic.”

Member Manikka Bowman was opposed to the motion “the way it was written.” Agreeing with Harding that this motion threatens staff morale, she said “It’s really time for a paradigm shift in how [this] body engages our administration and teachers,” and was unhappy that she did not see this motion as collaborative. The CRLS staff has “already articulated these goals” for class size, and she wanted to let them lead. She was joined by Mayor E. Denise Simmons, who said, “Let [Level Up] launch and implement and then we can review it.”

Simmons also objected to creating a policy that caps class sizes, saying, “Someone might think we are making a statement or a policy.” In fact, the committee is on record capping class sizes – elementary school classes are capped at 25 by teacher contract; high school science and technical arts classes are capped at 20. Dexter cited “pilot school” caps at 14 students each.

This led Harding to raise a favorite issue of his: “It’s not the size of the class but the quality of the teacher,” he said. Harding repeated his argument that a good teacher can run a good class no matter the size.

Nolan countered that class size does matter, pointing to testimony from the district’s “best teachers” asking for limits.

Simmons objected to “assumptions we are making about the quality of students.” Level Up seeks to break a pattern of apparent racial and class divisions in classes now structured as “honors” or the more basic “college prep” by combining all ninth-graders into honors-level English classes with the provision of an Honors Access support class for students identified by upper school and high school staff as needing support. Smith has said that about 100 students have been identified for Honors Access.

Yet Simmons, who strongly supports Level Up – as do all committee members – said Dexter’s motion on class size raised concerns “we are assuming something that may not be true” about students in suggesting that a heterogeneous class of different skill levels may need more attention.

She was joined by Kelly and Bowman, who objected to “labels that we are putting on students.” “We won’t know until students have the opportunity” what they are capable of. “It’s dangerous … going in assuming what the outcome will be,” she said. “We should challenge ourselves to think about this differently.”

Dexter calls for a vote

Declining to take up Simmons’ invitation to withdraw her motion, Dexter called for a vote, with these comments: “It’s often brought up that if somebody brings a motion it’s because they don’t trust the administration, but my motivation is to ensure that the administration’s vision is brought forward. If we trusted … everything, we would have no job. Our job is oversight, protection and to question.”

Pointing to “hard caps” that already exist on class size throughout the district, she argued that it was well within the scope of the committee. “Class size does matter,” she said. “Many of these teachers have not taught a course this heterogeneous,” she said. “We should do it slowly and give it the most chance for success in the first year.” Offering a cap on class size “is not about not giving [students] a chance.”

Finally, though she offered support for Smith’s work, she worried that he has not always been bold enough asking for resources. During last year’s budget negotiations, she said, the committee offered more guidance counselors and teachers in reaction to sharply increased enrollment. He demurred, she said, but ultimately used all the district reserve teachers assigned to the high school to meet core needs, and still this year there are ninth-graders unable to take required ninth-grade physics because of staff shortages. “We are not insisting that he gets his resources,” she worried.

Despite Dexter’s call for a vote, and Fantini specifying a roll call vote, there were still more comments. Bowman objected to “painting this body as if we were not supportive of smaller class sizes.” Responding to Dexter’s assertion that a significant number of students getting special education services also increases demands on teachers to provide differentiated instruction, she bristled: “We make a lot of assumptions about our [special education] kids and I do not like it … I do not like the spirit of this conversation because it’s setting up this body in a divided way.”

Kelly, admittedly “emotional,” talked about the importance of starting Level Up. “I’m sorry we are going to take a vote saying ‘no’ or ‘yes’ about this … I don’t want to have another conversation about whether or not there is going to be a cap on the numbers.”

Simmons had the last word, clarifying that she was considering this vote – on a motion related to class size – as a referendum on the Level Up project. “I consider a ‘no’ vote as a vote in favor of the program,” she said more than once. “I take umbrage at the fact that there is an assumption that these kids come at a deficit,” she said. “That is so disrespectful.”

The motion was defeated with Dexter and Nolan in favor and the rest of the committee opposed.

Passed unanimously without comment was a Simmons, Fantini and Kelly motion reaffirming the sanctuary status of Cambridge schools, specifying that the district “will create safe spaces in our schools for undocumented families,” provide them with complete access to service and information and “help ensure that all students and their families are made aware of their rights and are made aware of the fact that they continue to be valued members of the Cambridge community.”

Also passed was a Harding and Nolan motion that, given a 2014 external review calling for changes in the academic coaching model and the current budget proposal making no changes in it, that the administration issue a report with recommendations.

Also passed was a obligatory motion to approve application for state financial assistance on redevelopment of the Tobin/Vassal Lane Upper Schools building renovation, scheduled for a few years down the road. (Recent renovations have not been awarded state aid.) Passed unanimously without comment was a final amendment to student policy allowing Cambridge library cards to be issued to all kindergarteners unless families opt out, a $27,000 contract for out-of-district tuition, increases of $1.2 million in Title I and $382,000 in Title II grants, $13,900 in state grants for residency artists and $1,400 in miscellaneous grants.

This post was updated March 27, 2017, with minor corrections to cap sizes in district classes. A correction was made to the graphic to show that Cambridge Rindge and Latin School Principal Damon Smith also suggested a specific class size.