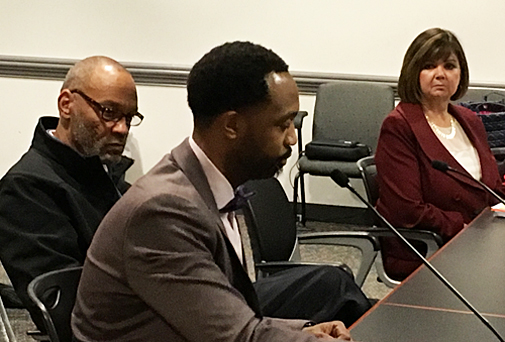 Principals lined up to field questions from School Committee members Tuesday, but despite efforts to get them to explore whether they need more resources, they didn’t take the bait.

Leaders from four elementary schools, two upper schools and the high school were called in groups to sit with bosses Superintendent Jeffrey Young and Deputy Secretary Carolyn Turk at the School Committee table during a budget subcommittee workshop. To a person, they presented themselves and their colleagues as managing their various challenges and making great progress, and did not name anything additional they would like in terms of resources or staff.

“The offer [of more teachers] is very generous,” Cambridge Rindge and Latin School Principal Damon Smith said more than once to committee members, “but our district has been really strong in helping us. There has not been a time when I have asked for something and not been able to make it happen.” Member Patty Nolan, who asked about relatively unchanged high school staffing levels compared with a 14 percent increase in enrollment, made it clear more staff was not hers to offer, but that she was probing about the need.

Smith reported that with use of computerized scheduling, 98 percent of primary requests by students were satisfied, and 93 percent of students said every one of their primary requests were satisfied, leaving no cause for extra staff. The proposed budget provides three full-time positions on reserve, and Smith said he “enjoys the flexibility that provides” to identify over the summer where he might need additional teachers. Needing an additional teacher for a specific class – whether a core course or an elective – does not necessarily warrant hiring a full-time staff member in a specific discipline, he explained.

But that didn’t jibe with comments from parents and teachers, Nolan said, or her observations as a parent or in school when she sees “lines of people in the hallways needing to change classes once school starts.” Stories of rising levels of students shut out of classes, both core and elective, has been an issue among high school families.

Smith blamed some of those lines on “teacher-shopping.” The school purposely does not indicate who a teacher is in class assignments, and he supposed many students seek to change classes because one teacher is preferred over another.

Nolan pushed back that CRLS policy is clear that changing teachers is not possible, and said the major reason may be that the computer creates impossible schedules.

Smith acknowledged that the schedules may not be “balanced” or may have “prerequisite problems,” and that there “need to be conversations around that.” It turns out that when students request their preferences for eight classes for the next year (students are asked to pick classes in February and March), the schedule they get in the summer may have all eight classes, but not in the right order. They may be “unbalanced,” meaning a student could get three highly intensive advanced placement courses in one semester, and all lighter electives in another semester. Or an advanced class may be assigned in the first semester with its prerequisite coming in the semester that comes after.

So it may be that the 98 percent figure is based on the students’ original requests the previous spring: 98 percent success, but the schedule may be unworkable. Further, students register in order of seniority – seniors register before sophomores, for example, and sophomores before first-year students. If a first-year student wants classes that are already full and signs up for a second- or third-choice class, that may also be counted toward first-choice success.

It was clear, though, that the issue of increased staffing at the high school is going to get no traction in the near future. Committee member Emily Dexter pushed Smith on the issue, but he responded again with registration statistics, adding that he is trading off having larger elective classes for smaller core classes. Nolan was stopped in further questioning by budget subcommittee co-chairwoman Kathleen Kelly, who told Nolan she “had made your point” and “was repeating yourself,” and thanked Smith for coming.

Elementary and upper school principals came up in two groups as “representative of their colleagues,” Young said in an introduction. Ready to answer specific questions about how their schools work – how they spend School Improvement Funds, how one school’s pilot social worker’s time is spent – they were less eager to move to the microphone when asked broader questions about whether they “have enough resources” or on their thoughts on “streamlined assessments.”

Principals Pat Beggy of Morse, Katie Charner-Laird of Cambridgeport, Jamie Frost of Tobin Montessori and Darrell Williams of the King Open School were the elementary school team, with most questions tackled by Beggy and Charner-Laird. Asked about supports for teaching students at all levels, class sizes and whether they producing “high level” students ready for sixth-grade work, the principals gave one or two examples of good work they are doing and did not ask for more assistance. Each of these principals has been part of the development of this budget.

One thing that emerged: Many of the dozen schools use their discretionary School Improvement Plan funds to pay for increased staffing – six for supplementing positions such as literacy specialists and math interventionists, Assistant Superintendent MaryAnn MacDonald said. The others pay for similar supports through Title 1 government grant funds, and one uses both. In Cambridgeport, for instance, half of the SIP funds goes to interventionists in grades three through five, Charner-Laird said.

Though none said anything about needing more staff support, there were some nodding heads among them when Dexter suggested exploring co-teaching in the lower grades for larger classes, which, she pointed out, are increasing.

Budget subcommittee co-chairman Richard Harding asked twice whether schools were getting “enough” support for student social-emotional issues before getting an answer. “Do you feel comfortable that we will do better this year than last year?” he asked. After a pause, Beggy said, “I speak for my colleagues in that we start every morning feeling we will be better today than yesterday. We know our schools; we need to do more work on how to best use that money. I will always keep being creative with that money; I will never sit here and tell you I don’t need more.”

“Do you want an honest, honest answer?” Turk asked. “There is never enough. But let’s not lose sight that there isn’t any magic sauce.”

“I don’t want to sit through another budget and another 500 emails saying ‘You need to address this,’” Harding said. “We do have resources.”

Kelly agreed, saying, “If there are things that you really do feel the schools need, let us all know.” To which the four principals smiled and nodded, but did not respond.

When member Fred Fantini asked them to comment on reviewing assessment levels in elementary schools, none made a move for the microphone. After a notable pause, MacDonald said they are launching a review and “want to respond to what teachers are saying.”

Principals Manuel Fernandez from the Cambridge Street Upper School and Mirko Chardin of Putnam Avenue Upper School took a couple of questions also, with Fernandez giving an overview of an impressive-sounding cultural competency program he has launched with his staff.

Dexter asked Fernandez whether he still wanted a family liaison, something he made an impassioned plea for last year.

“We always want more hands on deck,” Fernandez answered. “There are several things I think we would consider if we had more resources. Knowing that we didn’t have [additional staff], I went to Harvard and asked for five interns” from the university’s Reimagining Integration in Schools project.

Asked  by Dexter if that is a “preferred model,” Fernandez was more measured than he was a year ago.

“I would have to reflect on that,” he said.

This post was updated to add Emily Dexter to the questioners of CRLS Principal Damon Smith on enrollment issues.