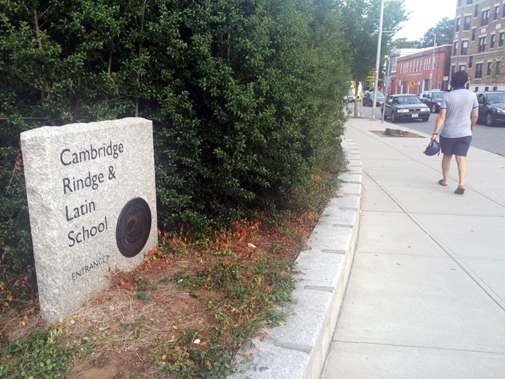 Changes are coming next year to how first-year students at Cambridge Rindge and Latin School experience the English-language arts curriculum. (Photo: Marc Levy)

Cambridge Rindge and Latin School Principal Damon Smith and staff appeared at a school subcommittee Tuesday to discuss progress on changing the structure of ninth-grade English classes – a proposal he first disclosed publicly at a Nov. 1 meeting when School Committee member Patty Nolan asked him to address rumors of the change. Smith and his staff are moving ahead on a plan to “detrack” English Language Arts classes for all first-year students. Gone will be the split pathway between honors and the more basic “college prep” courses. Instead, all ninth-graders will take honors ELA.

The original proposal was to also restructure World History starting next school year, but now World History changes are to start the following year. There is still no plan to change other classes, Smith said at an untelevised meeting of a subcommittee on curriculum and instruction.

“I might have been guilty of swinging for the fences,” Smith said of the scheme to change both courses at once. “In talking with central administration and staff, I realized we have other big changes coming up.” He noted a plan ensuring all students have laptops, which will inject more technology into the classrooms, as well as ongoing professional development programs. “It’s a lot for staff members to manage,” he said.

Instead, the “level-up plan” will create ELA classrooms with heterogeneous classrooms, continuing the model used in junior kindergarten through eighth grade, he said.

Referring to the sorting into honors and the misnamed “college prep” classes through student, family and middle-school teacher input, Smith challenged the notion that the question should be, “Why change the structure now?” The question, he said, should be “why has it taken us so long to do this? Why are we asking students … to make decisions on their perceived ability without ever sitting in on any classes in our school?”

“Ninth grade represents our best opportunity to help students challenge their understanding of their own academic and social capacity,” Smith urged. “This is our best shot.”

School Committee member Emily Dexter, who gave strong support to the proposal, called it a discrete change of one course that “feels incredibly meaningful. We are moving toward inclusion.”

Even curriculum, recently overhauled to match new statewide standards, will be largely the same. Currently the college-prep version for the material runs a year, while honors is one semester, said the high school’s dean of English curriculum, Jen Hamilton.

Students can take an extra class “to help them access the honors material” if needed, Hamilton said. Presented in November as daily classes for one semester, the “Honors Access” class is now every other day for a year, alternating with a required “Wellness” class – by necessity, a separate stream of students needing ELA support.

The new schedule will not only allow former college-prep students to add an elective course (where they used to take two semesters of ELA), but, the hope is, to find that their other classes are not all the same faces from their college-prep ELA class.

The ninth-grade embedded honors physics class will continue, but Smith and his staff have said the model – combining honors and non-honors students in one classroom where students have the option to do extra honors work – will not be used for first-year ELA and, eventually, World History. The embedded honors physics “is not all that we would like to see” in encouraging more students to continue taking honors courses, Smith said, though “we do know that our students’ [demographic] subgroups outperform students statewide” in physics standardized tests.

In addition to the Honors Access class for review and preview of class material, the school is introducing a voluntary summer ELA support class. It already offers its Advancement Via Individual Determination program, which provides support to “underserved” students to successfully finish honors classes and be the first in their family to go to college. Avid has an excellent success rate. Strong motivation and commitment to extra work is a requirement of the program. Another model is Move Up, an initiative to move math and history students from college prep to honors classes by their second semester. Its success in history classes, Smith said, “demonstrates that there are many more students with unrecognized potential” to do more challenging work.

Asked by Dexter whether the staff is considering adding teacher resources through co-teaching or reducing class size, Smith and Hamilton offered no examples other than the Mayor’s Program summer ELA class. Hamilton said that the average class size will be 20 students. (The current maximum is 24.)

“That’s the average,” Dexter said, “but what’s the range?”

Hamilton said she could not say with certainty, because there are still so many variables and details remaining in scheduling. The hope, she said, is that classes will each be 20 students.

Claire Spinner, chief financial officer of Cambridge Public Schools, said Wednesday in an untelevised budget presentation that the change is “likely to have a staff impact that will require some added resources.”

Hamilton also addressed what she said was probably a concern for many parents: behavioral issues encountered more in college-prep classes, which she blamed largely on a concentration of students hearing they are “CP material,” then traveling together from class to class all day. Heterogeneous classes could change that, as Smith and Hamilton said has been seen in the embedded physics honors classes.

Despite questions from committee members Dexter, Patty Nolan, Richard Harding and comments from Kathleen Kelly, the issue of how and when students needing the Honors Access class will be identified did not come up. Course selection for incoming ninth-graders happens this spring.

There was no discussion of whether there will be more supports, such as tutoring or after-school help as in the Avid program, nor discussion on staffing levels and other supports in Honors Access.

Nolan asked if there were lessons learned from earlier attempts to address the split between honors and college-prep, which was originally one semester of English that “was extended to one year in an attempt to better support students and decrease the achievement gap.” She also asked that staff be very clear when communication with families about how this differs from the “debacle” of 2001, when a school-wide “de-tracking” led to an exodus of families and the near loss of CRLS accreditation two years later.

Harding, Nolan and Dexter also urged Smith and his staff to improve communication with families about what to expect.

In the six years he has been principal, Smith said, “we have always asked eighth-grade teachers to recommend how to sort the students. What is our rationale for maintaining this grouping?” Smith asked. And to those apprehensive to the change, “why are they holding fast?”

Smith quoted students as well as education experts Carol Burris and Della Garrity on the desire to avoid students “internalizing differences [so that] learning opportunities become limited to all but the elite student.” He told a personal anecdote about his own artistic efforts being crushed by the comment of a third-grade teacher.

Smith said he and his staff have been working on this since last year with Burris, whose Rockville Centre high school, where she was principal, began requiring all 11th-graders to take the International Baccalaureate English class in 2012. Lexington High School, Stanford, Conn., and Evanston, Ill., are also “leveling up” their high school classes with Burris’ support, Dean of Curriculum Tanya Milner said.

“We still have a long way to go,” Smith said. “But I feel very confident and comfortable with our teachers developing a strong pathway for all students.”

“If we wait until every possible outcome is discussed we will be here three years from now not having made any progress in helping our students to conceive of themselves differently,” he said.