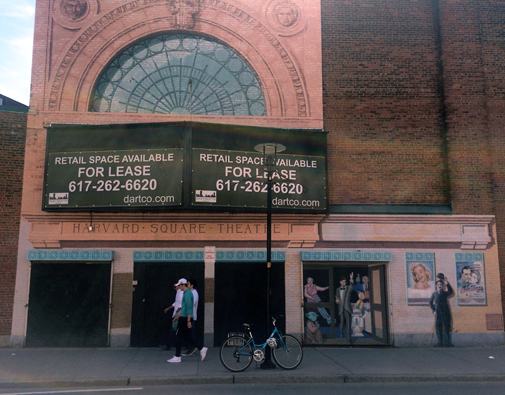 City Councillor Leland Cheung had an ultimatum for billionaire investor Gerald Chan, owner of the five years-vacant Harvard Square cinema at 10 Church St.: Tell us your plan for this property, or else.

Update on April 15, 2017: After publication of this story indicating no notice was sent, the city disclosed a letter sent from City Manager Louis A. DePasquale to Chan’s company Thursday requesting it “inform me within no more than 30 days of your long-term plans for this currently unused property, providing as much detail as you can.” The city’s disclosure came in an email sent just before 9:30 Saturday night.

“The behavior of Gerald Chan has been, I think, unacceptable for our community norms. It’s been like a cancer on Harvard Square,” Cheung said at the Feb. 27 council meeting (video). “I don’t think he’s even thinking about it. … When this happens, we need to say eminent domain is on the table.”

The council had unanimously adopted an order drafted by Cheung that night “requesting” that DePasquale give Chan 30 days to provide his “long-term plans for this property.” It described the property as “a blight on the thriving Harvard Square community,” language that suggests an eminent domain taking. Normally council orders to the manager are phrased as requests, but they almost always happen.

This one didn’t happen for more than a month. The manager has been silent about why, and the council has not been informed. For the past two weeks, the manager has not responded to questions about when a demand was sent to Chan and what the deadline was. It turns out that’s because no demand was sent during that time.

On Thursday night, the last day to respond under the public records law, City Solicitor Nancy Glowa wrote that as of March 30, “the city did not have any documents responsive.” That means no notice sent to Chan, and no reply from Chan. No communications back to Cheung or the other two councillors who co-sponsored the order: Jan Devereux and vice mayor Marc McGovern; no communication back to the entire council. Under the new Massachusetts public records law that took effect this year, the city was allowed 14 days to respond rather than the 10 days they used to have.

The city did not respond to email and phone messages left Thursday and Friday requesting an explanation. Although the records law covers written letters, emails and text messages, it does not cover telephone calls or in-person meetings.

This story originally published just after 4 p.m. Saturday. Five and a half hours later, Glowa furnished a copy of a letter sent Thursday.

“We had intended to send this to you earlier as you had requested, so we apologize for not getting this to you sooner,” Glowa wrote in an email.

The city has not explained why the letter was not sent until 45 days after the council’s request.

“I hope that’s not true,” McGovern said in an email Thursday night, referring to the lack of a demand sent to Chan. “First I heard of it.”

Likewise Devereux, away for the weekend in San Francisco, said Friday that she had received nothing from DePasquale: “Nada.”

Cheung’s wife gave birth last week, and he is out on parental leave. He did not respond to questions other than to say he was “not plugged into what’s going on besides what I read on Cambridge Day or see on Fox News.”

Beyond asking for letters to be sent, the council also has the power to summon witnesses and documents. This subpoena power is almost never used. 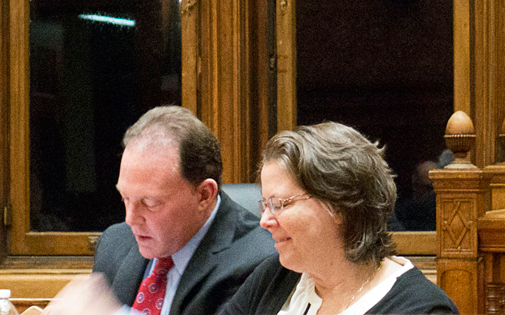 Attorney Anthony Galluccio, representing Chan, said Saturday that “we are working diligently on an announcement of plans over the next four to six weeks.”

Paula Turnbull, Chan’s property manager, attended a hearing of Devereux’s economic development committee in mid-December. She gave an update on the theater then:

“We’ve owned it for about two years, and we’ve been doing studies with regard to architectural and structural integrity of the building – feasibility.

“It’s our intention to develop plans in the spring to move forward with that redevelopment. I should probably say that Gerald Chan, has a great affinity for the square: He’s purchased these properties through his commercial family enterprises with the intention of restoring it and making it as lively and attractive to the whole world.

“Other things that are important to him are science, education and furthering those missions within Cambridge. I mention that because while we have looked at the traditional-use redevelopment of the Church Street property to have a lively retail first floor/second floor and then office above, we’re also looking at other things that may be science-related or education-related. He doesn’t just look at the traditional economic redevelopment plan.”

Cheung’s order said “the property owner has been unresponsive to the City’s repeated requests to do something with the property,” but it’s not clear what those requests were. The only public request has been to attend Devereux’s December meeting, and Chan sent Turnbull.

The council may not have the power to demand the city manager send out notices, but it does have the power to change zoning. At the same Feb. 27 meeting, McGovern, Cheung and Dennis Carlone introduced a proposed citywide zoning ordinance to tax vacant property after 180 days.

The council will hold its first hearing on the proposal at 3:30 p.m. Wednesday, and the Planning Board hears it the following Tuesday. City planners have not yet prepared a staff analysis memo of the proposal, and Monday is a city holiday.