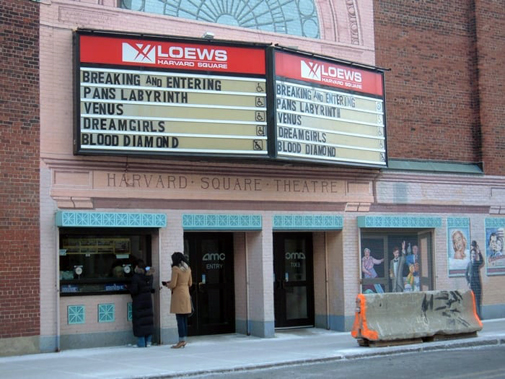 The owner of the defunct AMC Loews Harvard Square 5 got a deadline Monday from city officials fed up after nearly five years of dead space on Church Street.

Harvard alum Gerald Chan and his Morningside Group investment company were given 30 days by city councillors to say what will be done with the building. After that, councillors said, they might start talking about seizing the property as a blight on the area.

During the meeting, councillor Jan Devereux said, an email had arrived from Morningside representative Paula Turnbull reminding her of a promise made late last year for a spring launch of plans for the site – “something potentially science-y,” in Devereux’s words.

No one seemed convinced.

“That email is just more lies … If we don’t hear back promptly with something we like, is vetted and is real, not just more promises that something will come this spring – every few months it’s, ‘Oh, it’s coming,’ but I don’t believe it anymore – I would hope that my colleagues would support potentially moving even more drastically against this property,” councillor Leland Cheung said, calling Chan’s actions in Harvard Square “unacceptable.”

On Tuesday, Turnbull issued a press release from Morningside saying that, while “there are many ideas for the site, and we are interested in exploring all of them,” there was no single idea the company had landed on pursuing. The statement appears at bottom.

Chan owns more than $120 million in commercial properties in Harvard Square and residential properties throughout the city, but he has kept some prime real estate empty for long periods. The former American Express Travel building at 39 JFK St., a prime location in tourist-jammed Harvard Square right across from Winthrop Square park, has been empty for more than two years, and the former Leo’s Place has been closed since January 2014 after 32 years at 35 JFK St. Like the restaurants Upstairs at the Square and Tamarind Bay, the diner shut down to make way for businesses owned by Chan family members; unlike Parsnip and Night Market, though, neither the noodle eatery or breakfast joint announced as replacing Leo’s has opened for business. In September the Pizzeria Uno at 22 JFK St., now owned by Chan, closed after some four decades in business, with a manager telling the Harvard Crimson a familiar tale: “We tried very hard to cooperate with the landlord, but … the rent prices have just gotten out of whack.”

On Church Street, the theater’s closing has affected neighboring businesses. Denise Jillson, executive director of the Harvard Square Business Association, said she knows there has been a drop-off in business at Lizzy’s Ice Cream and the Border Cafe – where five years ago there were lines out the door and a regular need for police details to watch over customers.

John Schall, owner of the former Fire + Ice at 50 Church St., said he shut down the restaurant after nearly 20 years because he couldn’t recover from the loss of business after the AMC Loews cinema closed. “It created a dynamic on Church Street – a loss of traffic and activity that I wasn’t able to recover from,” Schall said. While there were other factors, “the life of Fire + Ice would have been significantly longer if that building hadn’t remained vacant for the last five years.”

Not all of that time can be blamed on Chan. The 32,080-square-foot building at 10 Church St., which served as a theater from its opening in 1926 to when AMC closed it in July 2012, was snapped up quickly by Cambridge developer Carpenter & Co., owner of the nearby Charles Hotel, for $6.5 million. The next year actor Casey Affleck talked to Boston magazine about reopening the site has a nonprofit theater, but nothing came of it. (An online petition is collecting signatures to convince Chan to use the space as a performance space again.) Carpenter & Co. hung onto the property for around two and a half years before selling to Chan in March 2015 for $17.5 million.

That’s a 154 percent jump, even adjusting the Carpenter & Co. price for inflation, but the property remained an example of what Schall and city officials called out as “land banking.”

Cheung was particularly vocal in his distaste for Chan’s approach to real estate in Harvard Square. That included a critique of even the properties he’s activated, which have “taken out some of the most popular restaurants and most lively, local aspects of Harvard Square and replaced them with things that are just not good,” with Upstairs at the Square’s replacement coming in for particular scorn.

“It’s been like a cancer on Harvard Square. [Chan] was the beginning of all this rampant, out-of-control land speculation,” Cheung said, pointing to a plan by developer Equity One to displace dozens of businesses from three adjoining buildings in the heart of the square to build a single large retail and office complex. “He’s been completely reckless and completely unresponsive.”

Chan sent Turnbull to represent him at a December hearing on the square held by Devereux, saying though his representative that he’d planned to attend but had suffered a dental emergency.

While Devereux was showing reserve, Cheung called himself “completely fed up with this situation … When this happens, we need to say eminent domain is on the table.”

Vice mayor Marc McGovern, who noted it took a decade to seize the empty Vail Court property near Central Square, said it was on Chan and Morningside Group to come forward with a concept for a cinema replacement that would “bring back some of that lost culture and not just something generic.”

But he also expressed interest, like other officials, in getting tougher on business and residential owners who sat on property rather than developed or occupied it, including through fines or property taxes – or more extreme measures, in some cases.

“You had me at ‘eminent domain,’” McGovern told Cheung.

In response to the council’s discussion, Turnbull and Morningside said Tuesday:

We are very excited about the community’s interest in 10 Church St. in Harvard Square. Our team attended a hearing on the Cambridge City Council in December and committed to a spring launch of the 10 Church St. plans. There are many ideas for the site, and we are interested in exploring all of them. We acquired the property two and one-half years ago, after the theater had been closed and have spent significant time looking at the most effective ways to activate the site. Our team has met with city officials and business association leaders and we are very aware of how important activating this site is. We have a good record in Harvard Square of renovating and preserving historic assets and attracting strong tenants that support the Harvard Square business district. We look forward to presenting plans in greater detail in the months to come and we are confident that they will be underway this Spring.