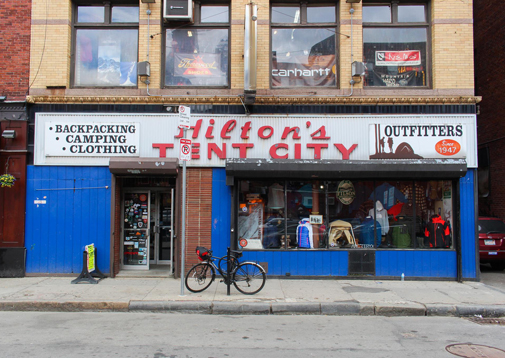 Harvard Square lost an Eastern Mountain Sports, but Central Square is getting a Hilton’s Tent City.

The four-story emporium of outdoors gear will close in mid-May at its Friend Street location near TD Garden in Boston and open about a week later at 565 Massachusetts Ave., which was a Citibank from 2005 to January 2016, when Citigroup pulled out of Massachusetts, emptying 17 storefronts. The location is next to the square’s Graffiti Alley. 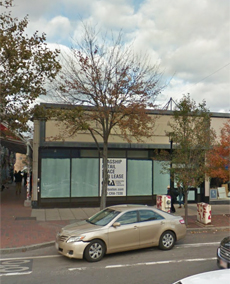 The new location for Hilton’s is a former Citibank in Cambridge’s Central Square. (Photo: Google)

Similarly, Eastern Mountain Sports arrived in Harvard Square in 2007, calling its 15,000 square feet of selling space atop One Brattle Square a flagship location and “an important part of our strategy to evolve the Eastern Mountain Sports brand.” But two bankruptcies later, with the second one coming in February, the store closed in March.

It’s been a rough time for outdoors and sporting goods stores. The national chain Sports Authority filed for bankruptcy last year, closing hundreds of stores; Boston-based City Sports got there a year earlier, closing all 26 of its stores in 2015. The local chain’s Porter Square location at 1815 Massachusetts Ave. became the subject of a Twitter-based crowdsourcing campaign run by Boston Realty Advisors for what might fill the 9,900-square-foot, ground-floor space. (No one responding with the hashtag #1815MassAve said “subdivide the space and make most of into a Partners Urgent Care clinic,” which is what’s happening.) Roach’s Sporting Goods closed all the way back in 2012, taking with it the only place in Cambridge to buy guns.

Hilton’s move is a downsizing. It’s going from 12,000 square feet over four floors “jammed wall-to-wall with gear,” as hiking site SectionHiker described it, to a single floor of just 3,950 square feet. Managers are clearing away inventory with a sale offering 75 percent of manufacturer prices.

Hilton’s was founded in 1947 as an army surplus shop and thrived as it added more goods for different purposes. But it has been caught up in the same retail headwinds as City Sports, Eastern Mountain Sports and Sports Authority. Store manager Tony Staffier told The Boston Globe last year that Hilton’s might see only a few dozen people come through its doors on a good day.