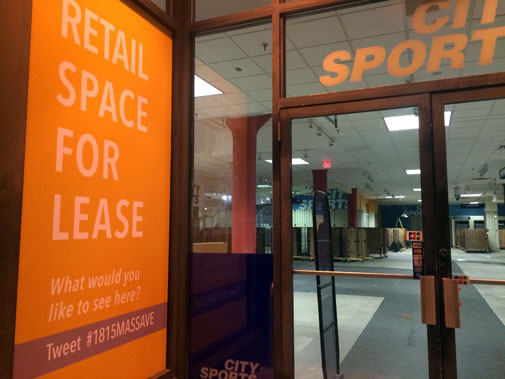 Ideas are being solicited for the empty retail space at 1815 Massachusetts Ave. near Porter Square. Until recently, the space was a City Sports location. (Photo: Marc Levy)

Boston Realty Advisors reps the 9,900-square-foot, ground-floor space in a former Sears building dominated by Lesley University and Asian restaurants, and City Sports was a sidewalk-facing anchor for the mall. But the chain filed for bankruptcy in October and closed all of its 26 stores.

The store wasn’t empty long before signs went up in the windows turning the address into a hashtag:

And it’s not just a publicity stunt, said Jaime A. Russell, a retail associate at Boston Realty Advisors.

“It’s a good way to get feedback from the neighborhood. I was actually just looking on Twitter and we’ve gotten some interesting feedback on [potential] tenants we’ll be reaching out to because we agree they could be useful for the area,” Russell said Wednesday. “There’s definitely some tenants that might not work too well in that space, but Trader Joe’s or some sort of market, a furniture store – I think those are some pretty good ideas.”

The hashtag is also “very fun to follow,” she said.

The first tweet, sent Jan. 28, started a bit of a trend of fast food requests:

(Porter Square once had a Popeyes – now roughly where the Panera is.)

But there have been suggestions for non-chain eateries as well.

#1815massave Maggi would like to see a nut free bakery there !!

#1815MASSAVE I would like to see a vegan restaurant/vegan caffe/vegan market in this area. Thanks!

And then there are the retail requests:

Zara, H & M or Primark might find #1815massave to be a great location.

There have also been some more community-centric suggestions:

#1815MassAve whatever you do… please not another bank or phone store.

But given that Lesley University recently brought its art students over from Boston to a Cambridge campus unified around its new Lunder Arts Center, there’s an increased demand for more art supplies than are sold at Paper Source or Michaels:

.@Blick_Art Move your Central Square, Boston location to #1815MassAve for all that art student business 🖌💸🖌💸

Finally, despite a Star Market being open 24 hours a day only a couple of blocks away, there’s a call for a Trader Joe’s or Whole Foods Market to come in – just as there is in East Cambridge.

@bradvisors I would LOVE a Trader Joe's or Whole Foods #1815massave

Perhaps the most poignant tweet bearing the hashtag is this one:

Even more square footage is available nearby, where a two-story Walgreens shut down in July after less than two years in business. CBRE Global Investors, which bought the space along with the rest of the 54,265-square-foot Porter Square Galleria for $35.5 million in February 2014, said last month that the company had a potential tenant for the space – but the agreement was too tentative to share.

Update on March 13, 2017: And the answer is … nothing Twitter users called for. Construction has begun turning 5,000 of the total square footage – just over half – into a Partners Health Care walk-in urgent health care clinic. “Better than empty space,” said Porter Square Neighbors Association minutes from February, suggesting that the remaining square footage was close to a lease agreement as well.