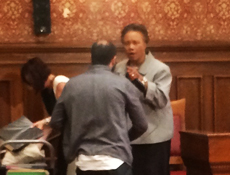 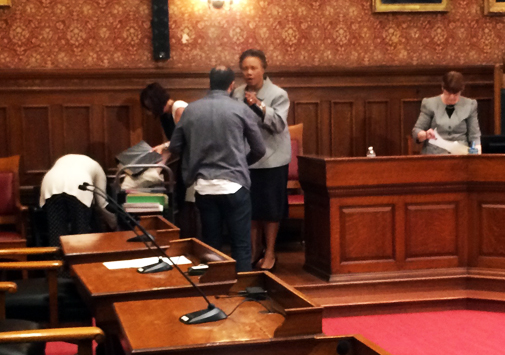 Mayor E. Denise Simmons berated city councillor Nadeem Mazen publicly at the May 8 City Council meeting for questions made at an earlier budget hearing, accusing him of misogyny and calling his conduct “outrageous.” She then yelled at him afterward, audible throughout the Sullivan Chamber and broadcast live on television and the Internet.

Councillor Craig Kelley had already written a memo expressing regret for not intervening during Mazen’s questions to the Election Commission at the May 2 budget hearing, and criticizing him for “something bordering, in my opinion, on personal attacks.” The memo said he felt questioning “veered” off salient budget points. Although questions are supposed to pertain to the budget, it is difficult to draw the line as to when a question relates to a department’s budget or not.

Simmons tabled the discussion in Kelley’s absence, but spoke on it herself.

Simmons apologized for her absence at the hearing, but said she had heard about the questioning, which she deemed “uncollegial at best, and borderline on a personal attack on the election board commissioners at the worst.”

“It’s not our role and responsibility to speak to staff,” Simmons said to Mazen. It’s not clear what this meant, as Finance Committee meetings are one of the rare chances for councillors to speak directly to and question city department heads formally, and budget hearings include hours of continuous dialogue between council and staff. “It’s the role of the city manager,” Simmons said.

“I hope that we’ll think long and hard about how we portray ourselves and others – It really bordered on misogynism. Really. Yes,” Simmons said.

Simmons told Mazen that he should not have asked difficult questions that were not presented to the staff in advance. Although council members are asked to submit questions in advance, it rarely happens. After years of being told no questions were submitted, this reporter stopped asking for them in advance of budget hearings.

When the meeting adjourned, she lashed out at Mazen again as he approached to react to her critique: “What you did was outrageous! And you should have known that! … You apparently don’t care. You should be ashamed of yourself! Grow up! … Is that a threat, sir? It seems like a threat. … Yes, you are! You always do! You think it’s funny!”

Although Simmons remarks were transmitted live when they occurred, they are absent from the city’s archived recording of the meeting, as they took place after the final gavel.

Mazen, asked afterward, said, “I thought the content spoke for itself.”

It is unclear what Simmons found misogynistic about Mazen’s exchanges at the budget hearing. A review of the hearing showed no apparent sexist language as Mazen spoke with Tanya L. Ford, executive director of the commission.

Salaries “going on for years”

Councillor Jan Devereux began questioning – discovering from the commission that early voting would not be available for this year’s municipal elections – and Mazen was next.

His comments were triggered by public comment at the budget meeting from Gary Mello, a regular critic of the commission. In a letter addressing criticisms long available to city officials, Mello expressed displeasure at Cambridge paying its four commissioners $35,000 per year with benefits when 16 cities and towns of similar size pay between zero dollars (Boston) and $3,600 (Somerville). Much of Cambridge’s election work is performed by full-time professional staff.

“To the matter of this kind of incendiary letter by Mr. Mello that is also very educational,” Mazen began (video). “When I’m looking at comparisons to cities of similar size, we’ve got a city two-thirds the size where people are paid one-10th the amount, we’ve got a city the same size where people are paid one-35th the amount. Nowhere where anyone is paid close to $10,000. What’s going on here?”

Lisa C. Peterson, deputy city manager, added: “We can certainly get more history here, but this has been going on for a very long time. And I think there was a determination or a reaffirmation a number of years ago … the Election Commission are the department heads of the commission, and so there [were] some salary increases and things that went along with that a number of years ago.”

Ford added that originally the commissioners ran the elections department pursuant to state law, and “years later they revamped part of that by including the executive director to run the office. So therefore, you have the Board of Election Commissioners, and that’s why they’re paid the full-time salary.”

Saying he understood the commissioners work “very long – 22-hour days” during elections, Mazen asked: “On the whole I’m wondering, does the number of hours per year reach up and past 100 hours per commissioner? Or 500 hours?”

“Absolutely. That and more,” Ford said. “With early voting alone, the hours are there …”

City Manager Louis A. DePasquale cut in: “I have talked with these commissioners; I know how much respect they have for the role they play … this is somewhat of a unique position. It’s not an hourly position, there’s not an hourly rate.”

Charles Marquardt said that “as the newest commissioner, I will point out that the thing that struck me: We have every election between 80 and 96 employees, each. A big part of the job is making sure not only are they trained, but you’re keeping up with them. Making sure they feel valued … It involves reaching out to them a couple of times a month, just to catch up them with them, because you don’t want your employees not to show up for next election, because one person can throw that entire precinct off. So that’s a big amount of work … As you know, hiring people’s not easy. Hiring someone for one day out of the year can be really difficult.”

“I read a letter like this one,” Mazen said, “and it still doesn’t add up for me.”

DePasquale said it would helpful to take a little time to prepare an answer, because he didn’t have this question in advance.

Mazen agreed, and asked him to make the case in comparison to other cities of similar size: “Look at this other city that’s paying $200,000 more on the whole. If we can say that we’re saving money or we can say – you don’t have to make a case of how hard people are working, but also the value they present, which is apparently quite high.” 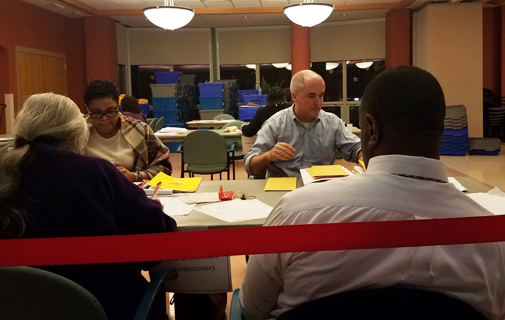 In the November election, Cambridge didn’t report its unofficial results until just before 3 a.m. The final ballots for the City Hall precinct arrived at the tabulation center at 2:45 a.m., hours after Marquardt went across the street to investigate the delay. In contrast, the first precinct to arrive was Harvard’s Quincy House, at 9:38 p.m. 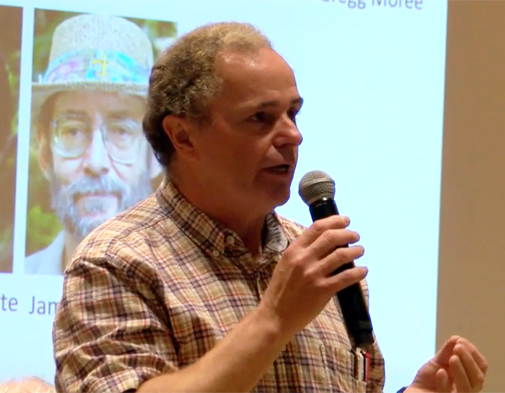 Mazen asked about this, noting that Mello’s letter “says we’re carrying into the night well past other cities of similar size. It says we could be using our mechanical and digital implements to have ready answers sooner.”

“Cities and towns with many more precincts than our own like Springfield [64] and Worcester [50] were done around 11 and sent workers home,” Mello had written.

Ford, saying she had not had the opportunity to read Mello’s letter, said that election commissioners “are required to come back to the tabulation center, they cannot stay at the polls. There are 34 precincts, there’s no way they can stay at each an everyone.”

Commissioner Polyxane Cobb explained commissioners begin the day before polls open and spend the day traveling between poll locations addressing logistical issues: “It’s not as if we show up on election day at 8 o’clock at night. We have been going since 6 o’clock in the morning. And we keep on going all day long, and in the case of the presidential we stayed until 3 o’clock in the morning on the day after the election. Until the last precinct is there.”

“I understand there are complaints that we don’t get the figures out, but those are always unofficial. We do provide Associated Press with figures from selected precincts as early as we can,” Cobb said.

But the commission provided the AP with statistics from only the first precinct to report before 10 p.m., and that was Cambridge’s smallest precinct that is not necessarily representative of the city at a whole. It didn’t report additional numbers until much later at night, after most newspapers had gone to press.

The commission didn’t explain why unofficial numbers could not be reported from machine tabulations as soon as the polls closed, as Mello had suggested.

In the small September primary in which Mike Connolly took over Tim Toomey’s seat as state representative, the upset race results were known at 9 p.m., thanks to runners bringing counts from printouts at each polling place; Toomey conceded the race at 9:38 p.m. Cambridge’s unofficial results came out just before 11 p.m.

Mazen next asked about committee meetings he had held last year about the Election Commission, and about increasing turnout.

“Do we know how the Election Commission seeks to increase the equity of participation and outreach, especially [for municipal elections] but also all elections?”

Cobb responded: “We don’t necessarily know the race and ethnicity of the people who are registering and showing up to vote. It’s not a question that’s asked on the form, and it’s not something that we keep track of.”

“Our job is to make sure people know elections are happening, here’s where you go, here are the hours. That’s our job. Turnout is a more complicated thing,” Cobb said. “We can’t be providing information about candidates or local issues at all because those are political questions, way beyond our purview. And that’s what turns people out to vote.”

In May of last year, Mazen and the full council had passed a policy order asking the commission to prepare a “voter guide” to contain candidate-submitted summaries of their platforms and additional resources for voters, and that the guide be available in “all languages commonly spoken in Cambridge.” Then-city manager Richard C. Rossi requested that be the subject of a roundtable meeting, but the meeting was never scheduled.

The commission discussed the voter guide at its April 19 meeting, but what they discussed was different from what the council envisioned: “A list of candidates: not their platforms,” Ford told the commission.

“Unfortunately, there was no following up with the commission to have the roundtable where the commission was going to talk to the City Council about this voter guide, and a few other things that needed to be hashed out; I can’t wait any longer,” Ford said.

At the budget meeting, the council approved the commission’s $1.2 million budget on a voice vote, with Mazen voting against.

Kelley’s memo remains on the agenda for the May 15 council meeting.

Marc Levy contributed to this report. An update was made May 12, 2017, to note that Gary Mello has long been making consistent complaints about Election Commission pay.