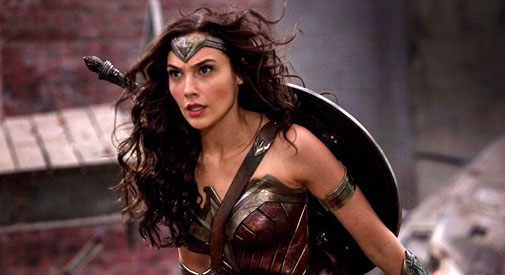 The beleaguered “Justice League” franchise, barely off the ground with the turgid “Batman v Superman: Dawn of Justice” beatdown last summer, gets a much-needed shot in the arm from the feminine side side of the tracks. Fans can breathe a sigh of relief with the release of “Wonder Woman,” which proves far sharper and more fun than any of its DC predecessors. The big question will be whether a woman win over the fanboys who – if we use box office as an indicator – like their super beginnings beefy, cut and baritone.

A peek into the Magic 8 Ball says yes.

The film may be long for what it is (nearly two and a half hours) but it’s also lithe and imbued with deft nuggets of humor, and it keeps moving. The opening scene, in which we meet Wonder Woman/Diana Prince (Gal Gadot) in the present, proves to be a Justice League tie-in. It’s an odd, disjointed bit, but we don’t linger before getting whisked back to a young Diana on the island of Themyscira, which for all intents and purposes is the DC reimagining of the Isle of Lesbos as it’s occupied solely by female Amazon warriors led by Queen Hippolyta (Connie Nelson) and General Antiope (Robin Wright). Besides being beguiled by Nelson and Wright, who speak with a weird accent and have fine, sculpted physiques that folks half their age would be lucky to have, we get mumbo jumbo about the rivalry between Zeus and Ares and the circumstances that produced Diana – the only child born on an island void of men. (A page from Amazon literature informs us they’re good for reproduction, but not pleasure.)

As with any demi-goddess, Diana grows up to become the most venerated warrior among her ilk – but she’s wonderfully humble and has just a dash enough of doubt for it all to work. Then a man shows up: Steve Trevor (Chris Pine), an Allied soldier with literally a boatload of Germans on his tail. The Great War is on. The Amazons, pitting spear and sword against German rifles, dispatch the landing party easily enough, and Diana departs with Steve to help end the killing in Europe by stopping the diabolical schemes of a rogue German commander (Danny Huston getting a nice hambone to bite into) and the mad scientist in his charge.

The film’s best moments are Diana’s wandering around priggish, prim London with her scanty Amazon attire and massive sword while Steve tries to cover her up. In a bar brawl, after she knocks a thug across the room, one witness reports himself “both frightened and aroused.” Diana is a spectacle, and an endearing one.

Much credit should go to Godot, who can be alluring, tough, goofy and sweet all in the same take. The other bit of credit goes to director Patty Jenkins, who took Charlize Theron – another statuesque actress – and made her paunchy and homely as serial killer Aileen Wuornos in the movie “Monster” (2003); Theron won Oscar gold for her illustrious downgrade. “Wonder Woman” isn’t likely to win any awards, but it is good, solid fun, and more complex than others in this mostly middling genre. That said, the film does slide into a murky CGI FX finale. In “Superman v Batman” it was numbing overkill and quite intolerable. Here it’s just a minor annoyance, nothing a little Amazonian skill and strength can’t overcome.