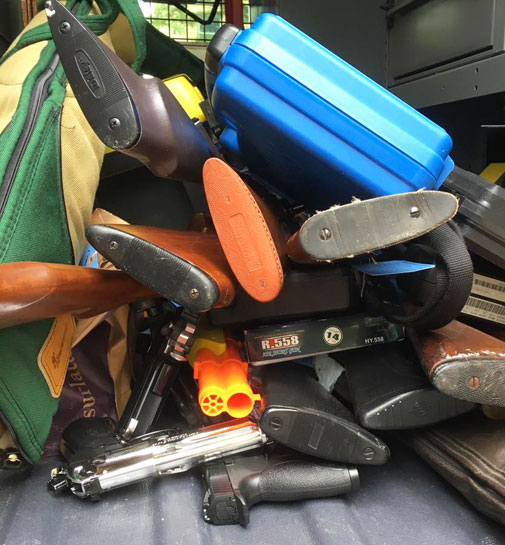 Cambridge Police released this image at the time of its 2016 gun buyback, when 23 firearms were collected at two city locations. This pile includes BB and toy guns that were turned in.

The city’s third annual gun buyback is Saturday at two locations, giving residents a chance to dispose of unwanted firearms with “no questions asked and no ID required,” police said.

“One of the guns turned in during one of our buybacks was a loaded handgun, which was brought in by a widow,” Warnick said.

Last year saw a regional effort spearheaded with the Middlesex Sheriff’s Office and including Arlington, Belmont, Somerville and Watertown. Among just Arlington, Belmont and Cambridge, 261 unwanted guns have been turned in during gun buybacks held since September 2013, Warnick said.

Cambridge Police and the sheriff’s office will be managing the sites and handling the guns turned in, and State Police will destroy the guns.

As an incentive to participate, residents will be awarded gift cards for each firearm turned in Saturday or scheduled this week: $50 for a BB gun, pellet gun or ammunition; $100 for a revolver, handgun, semi-automatic, shotgun or rifle; and $200 for an assault weapon. Children who turn in any toy guys will be eligible for a $5 ice cream gift card.