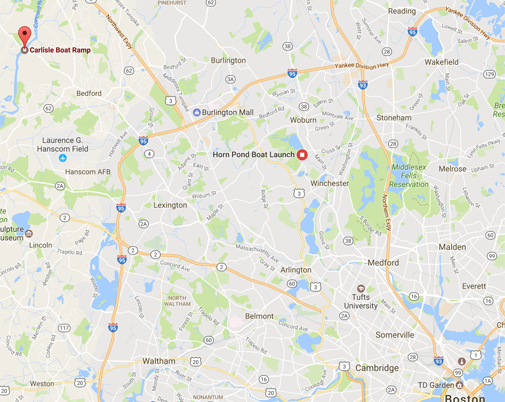 The remains believed to be those of Richard W. Kandrotas were found nearly 20 miles from Cambridge, seen in the lower right of the map.

The remains found last month near a boat ramp in Bedford were believed to be those of Richard W. Kandrotas, 79, a homeless man who had been living in Cambridge, officials said Thursday.

A preliminary investigation suggests the body was left there after his death, and his death is being considered suspicious, said Middlesex District Attorney Marian Ryan and Bedford Police Chief Robert Bongiorno. The location is nearly 20 miles from Cambridge, and up to an hour’s drive away.

A ruling on the cause of death by the Office of the Medical Examiner is pending, they said.

Boy Scouts cleaning up trash early May 13 along the Concord River, off Route 225 in Bedford, saw “something suspicious along the embankment,” law enforcement officials said in a press release. Police responded to the Carlisle Street Boat Ramp at around 11 a.m. and found the body.