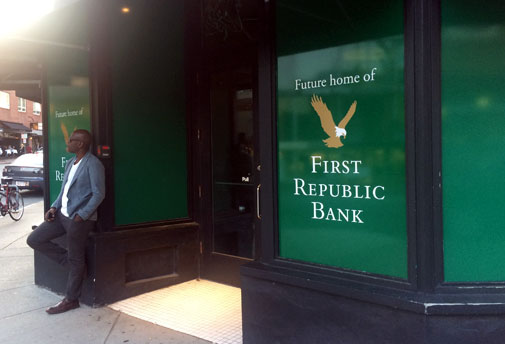 Harvard Square is getting another bank branch.

First Republic Bank will be taking over the former American Apparel space at 47 Brattle St., empty since the end of March after the controversial clothing company suffered bankruptcies and shuttered stores nationwide.

Rising rents in the square led to a surge in bank branches in the 1990s and 2000s for landlords who saw them as stable tenants able to pay top dollar for long-term leases, but unpopularity among residents and urban planners led to a backlash and zoning that limits the amount of storefront they can take up.

“Spaces of interaction – where people meet to share ideas, catch up and connect – are vital for urban neighborhoods. Banks have limited hours and are not open on weekends or evenings, leaving dark windows with no activity,” according to CoUrbanize, a Kendall Square startup that creates websites to serve as meeting spaces for community projects and developments. “Thanks to online banking and electronic deposits, most people conduct the majority of bank business online or at an ATM. The number of times a person visits their neighborhood bank branch, rather than an ATM, are likely fewer than visits to a restaurant or cafe.”

In response, some banks have taken a different approach. The square’s Capital One Café, a few blocks away at 24 JFK St., has aspects of a coffee shop, with Peet’s Coffee & Tea service, and a co-working space, with free Wi-Fi, “flexible, open workspaces” and a private community room. The location is open until 9 p.m. for much of the week, including Saturdays, and until 6 p.m. Sunday.

A publicist for First Republic said Wednesday that the bank had decided to “pass” on commenting about its plans for the 5,247-square-foot Brattle Street space (with a basement of the same size), including whether it would take steps to ensure a lively streetscape as Capital One had.

There was also no comment on a planned opening date, said Greg Berardi, of Blue Marlin Partners.

There are at least eight financial institutions open in the square, from Cambridge-based businesses and the Harvard University Employees Credit Union to giants such as Bank of America. The coming of another bank was not welcomed by community representatives. 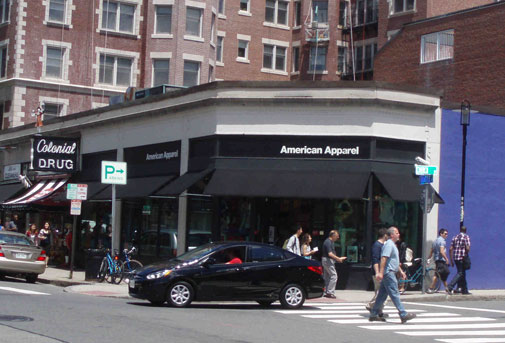 “Harvard Square stakeholders, whether in the decision-making position or not, need to think deeply about the diversity of unique local experiences that makes Harvard Square [into] Harvard Square,” said Abhishek Syal, president of the group Our Harvard Square. “We risk turning one of the most charming and historical neighborhoods of the United States of America into a typical metro shopping square.”

Suzanne Blier, a leader of the new Harvard Square Neighborhood Association, called the arrival of another bank “deeply unfortunate” and a sign that zoning change was needed – including limiting the physical presence of banks or financial institutions in the area as has been done in other parts of the city. “Such changes would be key to bringing commercial life back to Harvard Square,” Blier said.

This isn’t the first clothing shop space Harvard Square has seen become a financial institution. In 2010, a closed Adidas store at 1270 Massachusetts Ave. was replaced by TD Bank.

But the area is becoming less friendly to clothing shoppers for other reasons as well. The high-end Tess and hipster apparel and gear shop Urban Outfitters are closing as developer Equity One prepares to revamp three buildings in the heart of the square.

American Apparel was open in Harvard Square for 11 years. Before the clothier moved in, the space was an “alternative pharmacy” called Harnett’s from 1993 to the mid-2000s.

First Republic opened in 1985 and has 68 locations, mainly in California. There are three branches in Boston, including one on Boylston Street at the Mandarin Oriental Hotel that is by appointment only.