‘The Beguiled’: One wounded male Yankee in mansion full of the foe, and the fuse is lit 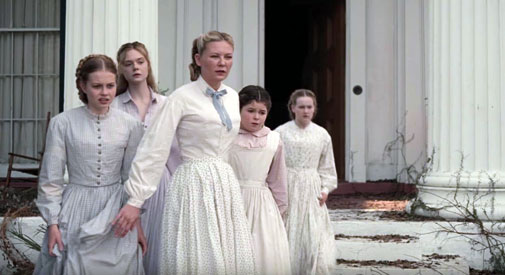 ‘The Beguiled’: One wounded male Yankee in mansion full of the foe, and the fuse is lit

Given Sophia Coppola’s penchant for strong female characters and repressed sexuality, be it pairing Bill Murray and Scarlett Johansson in “Lost in Translation” (2003) or the alluringly perverse texture of “The Virgin Suicides” (1999), it somewhat makes sense that she set her sights on remaking the Civil War gothic “The Beguiled” starring Clint Eastwood and Geraldine Page. That 1971 film, based on Thomas P. Cullinan’s novel, “A Painted Devil,” was directed by Don Siegel – who would later that year pair with Eastwood again for the maverick cop avenger fantasy, “Dirty Harry” – and mined Eastwood for all his macho virility as a Yank soldier, wounded behind enemy lines and brought to an all-female seminary to recuperate. Given the prim nature of the house, the sheer presence of male pheromones wreaks havoc on the females’ sensibilities as Eastwood’s Cpl. John McBurney proves to be a feral manipulator, having his way with several of the woman and even pitting them against one and other. Coppola’s version throws a dash of saltpeter on the role here undertaken by Irishman Colin Farrell, who turns the good corporal into a more humane, less lurid incarnation. 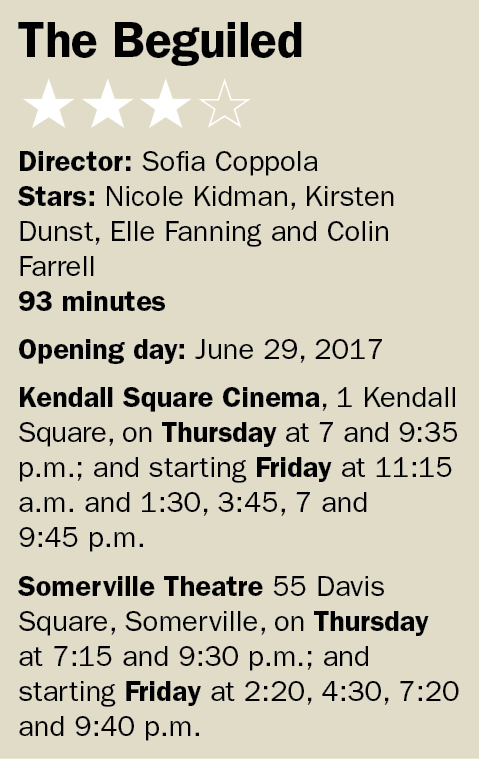 You’d think a softer touch might educe a deeper plumbing of the complex emotions that get brought to the surface by war, strictly imposed Christian values and a member of the enemy – and the opposite sex – lying in the very next room, but that doesn’t prove to be the case. Coppola chases authenticity in small, subtle strokes; Siegel took a far different approach, creating something of a psychological thriller, inserting gauzy fantasy sequences and quick intercuts of the lean Eastwood in bed with one of the lasses as horror etches across the faces of the estate’s matrons attuned to the meaning of the giggles and bumps echoing from the far reaches of the house. The film, a box office disappointment that was intended to prove Eastwood’s range beyond revenge westerns, bordered on near spectacle, but it possessed an edgy energy that never flagged.

In the roles of Martha (whom Page played), the spinsterly and desirous head of house, and Edwina, Martha’s earnest second in command, Coppola asks much of Nicole Kidman and Kirsten Dunst, and the two shoulder the film dutifully. Almost too much so, as the whole affair, like the women themselves, feels too muted and staid. Things are held back for so long that when it comes to the sussing out of the fox in the henhouse and some bloody retribution, the revelations and transitions don’t feel quite earned. It becomes a near series of perfect emotional inflections orchestrated too far apart.

Beyond the overall texture, other alterations by Coppola’s script include the notion that Farrell’s McBurney is an immigrant mercenary desperate for funds who takes up with the Union for the $300 pay. The move allows Farrell to engage his charming Irish brogue, which makes the corporal more gentlemanly than Eastwood’s unbridled soul, but also abates his mercurial nature – the current that made the earlier film so electric – and furthermore makes him apathetic to the larger conflict outside the estate’s gates. In short, it’s a character neutering. Gone too is the role of Hattie, the black house servant (played by Mae Mercer, who would have a small part in “Dirty Harry” as well) who clashed nicely with Eastwood’s corporal. Siegel didn’t do much with the issue of race, but for a socially acute director such as Coppola, and given the matters of race and racism filling the evening news these days, it seems like a missed opportunity.

Still, given the palette Coppola has chosen to paint with, the film is competent and well composed and knits together seamlessly in the final scenes. Beyond her capable cast, Coppola’s major ace in the hole turns out to be French cinematographer Philippe Le Sourd, whose framing of the Virginian estate through hanging strands of moss as bombs burst just a few fields away is a scrumptious aesthetic. It’s a wonderful overall effect – the eerie closeness of the war to the film’s single setting despite anything to do with blood, battle or allegiance feeling state lines away, except when it comes to matters of the heart, where devastation can come in a single glance.

Supporting Kidman and Dunst, Oona Laurence and Elle Fanning strengthen the pivotal roles that determine the corporal’s fate. Oona’s 12-year-old Amy discovers the corporal while out picking mushrooms, while Fanning’s Alicia, the house’s elder teen seeking to explore her powers of appeal, raises brows and pushes buttons. Fanning, who starred in Coppola’s 2010 tale of Hollywood melancholy, “Somewhere,” seems to take her much-desired ingenue from “Neon Demon” (2016) and channel her into a more calculating and brazen extension. There’s no question this is a great cast with great chemistry, but taking the leash off puritanical posturers means you actually have to loosen up the frayed strapping.