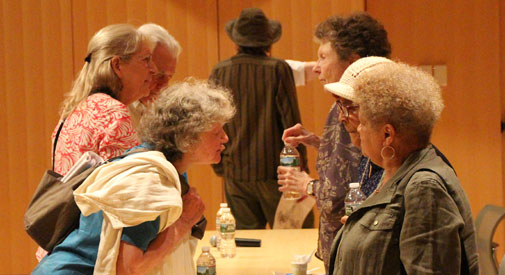 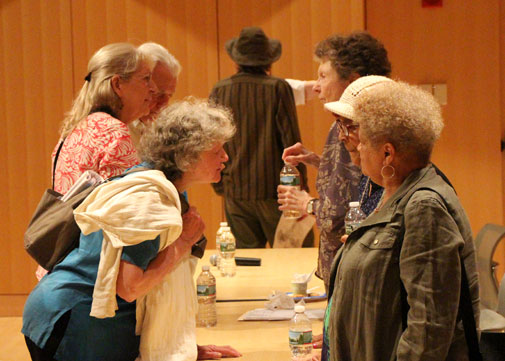 Audience members engage with panelists Saturday at “Radical: Cambridge and Somerville activism in the ’60s and today,” held at the Cambridge Main Library. The panelists at right are, from farthest from the camera to closest, Ti-Grace Atkinson, Carol Hill and former city councillor and state representative Saundra Graham. (Photo: Tim Plenk)

Since not everyone with powerful memories of 1960s activism could be a panelist at last weekend’s event “Radical: Cambridge and Somerville activism in the ’60s and today,” Cambridge Community Television has set aside time Wednesday for local activists to come record their stories in the studio.

From 4 to 7 p.m. Wednesday at Cambridge Community Television, 438 Massachusetts Ave., Central Square, locals with stories from public protests, riots and other, quieter examples of the changing times five decades ago (and into the 1970s) are invited to drop by and be captured on video, ensuring those stories aren’t lost or forgotten, said Susan Fleischmann, executive director of CCTV.

Among the audience of roughly 200 at “Radical” were many people with vast, firsthand knowledge of the era’s activism – made clear by their ability to engage with panelists on the details and flavor of the time. Charles Sullivan, executive director of the Cambridge Historical Commission and co-author of “Building Old Cambridge: Architecture and Development,” threw a question to the crowd after his presentation. After the panel shared by Sullivan and Tim Devin, artist, librarian and author of “Mapping out utopia: 1970s Boston-area counterculture, book 1: Cambridge,” a stream of people gathered to tell Devin more details on his topic.

Similarly, residents Steve Kaiser and Saul Tannenbaum had vivid memories of being caught up in sometimes violent protest around Harvard and the Massachusetts Institute of Technology in the late 1960s and early 1970s, matching the recollections of some of the panelists from the era: Ti-Grace Atkinson, the radical feminist who took on The New York Times; Bill Cunningham, local housing activist and historian; Saundra Graham, who fought Harvard expansion; Laury Hammel, who went from Students for a Democratic Society to advocating for sustainable businesses; Carol Hill, who went to jail for defying a grand jury; and former city councillor and mayor Ken Reeves, who grew up in Detroit in turbulent times and encountered similar unrest when arriving in Cambridge to attend Harvard University. (Kaiser’s story is in the comments section below the “Radical”event preview.)