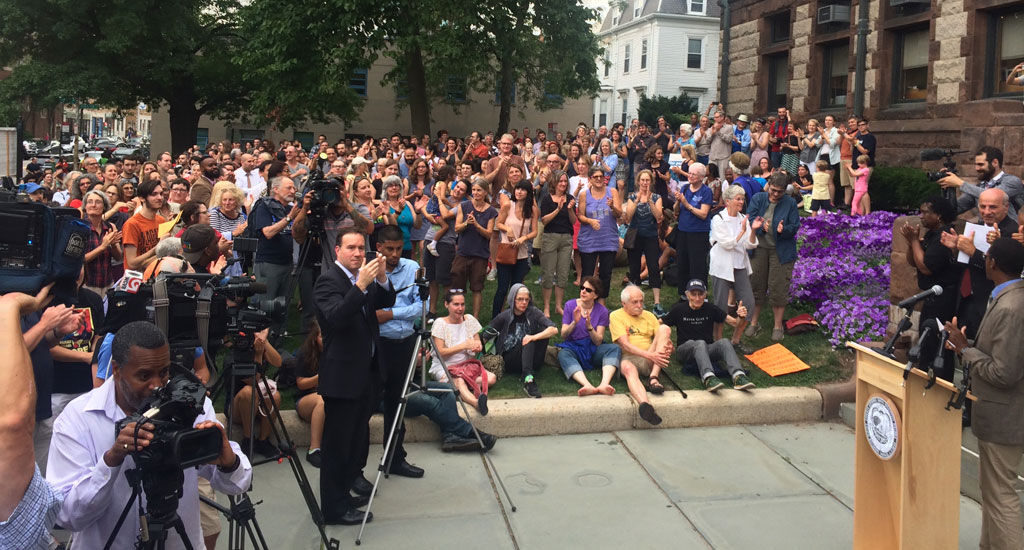 Student attends before heading back for classes at scene of Va. attack
By Marc Levy

A “Cambridge Stands with Charlottesville” rally Monday drew as many as 600 people. (Photos: Marc Levy)

The rhetoric was sharper and the bitterness and anger palpable at a rally held Monday at City Hall after racist violence in Virginia – the third such rally held in Cambridge in response to the still young presidency of Donald Trump and, officials made clear, certainly not the last.

At the February “Rally for Unity” in response to threats over immigrants, the message was primarily that Cambridge remained a safe haven for people of all kinds, whatever the status of their citizenship; at the April “Rally for Climate Action” the message remained positive despite some head-shaking over the “anti-science” coming out of the White House.

But after clashes between white supremacists and counter protesters led to three deaths in Charlottesville, Va., on Saturday and Trump took two days to produce even a tepid criticism of “alt-right” activists and a fatal attack by speeding car, comments about Trump at Monday’s “Cambridge Stands with Charlottesville” rally were cutting.

“We need to send a message to someone who just doesn’t get it that hate has no place in this country,” Mayor E. Denise Simmons said. “Fortunately, we are not a country that is blindly led around by national leaders.” 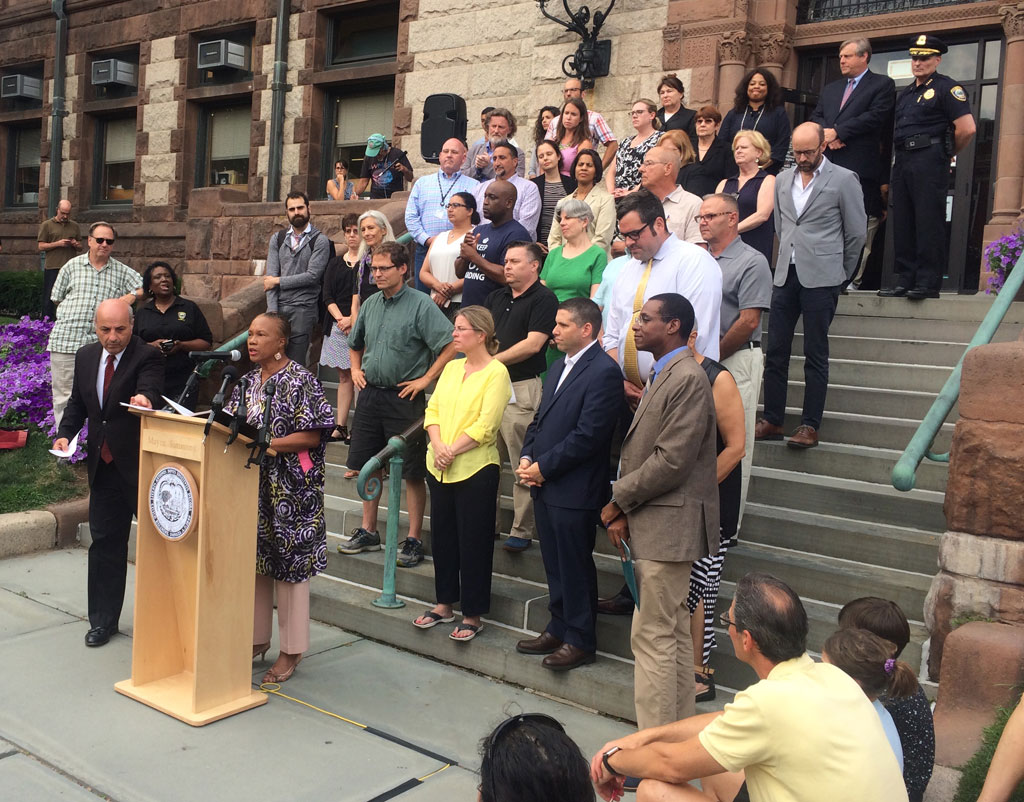 Mayor E. Denise Simmons speaks at the rally. City Manager Louis A. DePasquale is by her side.

She called Trump’s final words about Charlottesville “too little, too late,” and vice mayor Marc McGovern blasted Trump’s earlier attempts to obscure and spread the blame for violence to include counter protesters: “This is not about free speech, this is not about all sides have a piece-of-the-blame pie, this is purely about racism, hatred and inciting violence, and we will not stand for it.”

He called for Trump to show leadership, support for American ideals of equality and to “stand up against neo-Nazi fascists like my grandfather did during World War II. He would be turning over in his grave if he saw people saluting as Hitler did on the streets of the United States of America. It is not something he would ever accept,” McGovern said.

Still, it “won’t be the last time” Cantabrigians gather for a rally at City Hall against Trump policies, McGovern said.

The Rev. Fred Small took the lectern twice, and while once was to lead a sing-along, he also had a blistering critique of deeply embedded U.S. racism and oppression, as well as white privilege that allowed many to overlook it. His harshest words were reserved for Trump and his advisers.

“White supremacy as an ideology, as a desire, as a longed-for dream, has not been welcome in the White House since the segregationist Woodrow Wilson left office 96 years ago – until now,” Small said. “Now it occupies an office in the West Wing in the person of Steve Bannon, champion of the so-called alt-right. And it occupies a privileged place in the affections and the political base of Donald Trump – so privileged a place that Mr. Trump can barely form his words around words denouncing white supremacists, and then only after two days of outrage over his equivocation even from his own party. And then even when those words are carefully scripted by his advisers and shoved in front of him.”

“Not surprising either that it takes the death of a young white woman, Heather Heyer, to get Mr. Trump’s attention,” Small said.

The rally drew not just other city councillors and School Committee members, but members of the state Legislature: Mike Connolly, Majorie Decker and Sal DiDomenico. And while the February rally drew some 300 people, Monday’s rally packed the lawn of City Hall with as many as 600, according to police estimates. With the front of City Hall out of room, people stopped to listen to the half-hour rally from across the street. 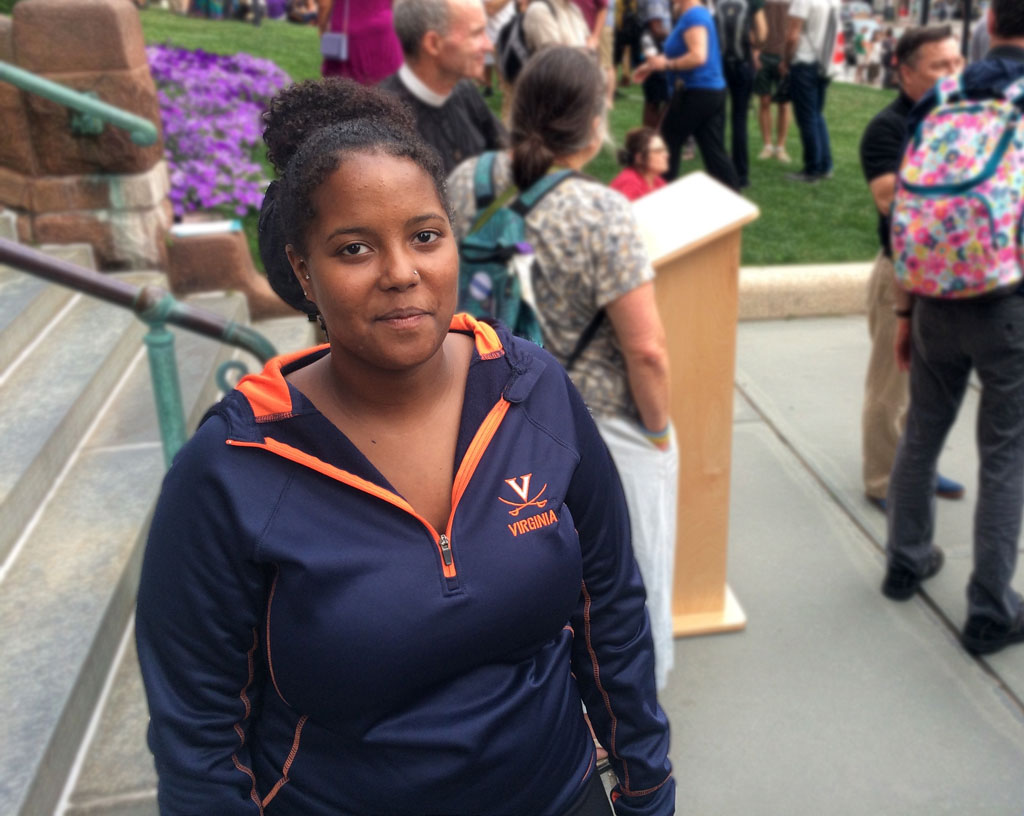 Ja’Dana Ellcock-Crayton is a Cambridge resident attending the The University of Virginia in Charlottesville, Va., scene of a racist gathering and attack over the weekend.

The listener probably most affected by the rally was Cantabrigian Ja’Dana Ellcock-Crayton, who will be headed back to The University of Virginia in Charlottesville next Sunday for her sophomore year.

The white supremacist gatherings – organizers of which include a recent UVA grad – began on campus Friday just outside classrooms and dorms. They then moved downtown, only blocks away. The attack there by a white supremacist in a speeding car hit home especially because one of the people injured in the attack was a close friend, now hospitalized.

“I’ve already made UVA my home, but it’s all pretty new to me,” Ellcock-Crayton said, asked whether she felt the white supremacist activists were opportunistic outsiders or a part of the community. Beyond a handful of incidents around Election Day – a monkey or teddy bear hanged by a small rope from a dorm window, graffiti of a racial slur used against blacks and a joke about Muslims – “Charlottesville is a lot like Cambrdge … It’s accepting, it’s understanding, we all work together, I have not felt any racism.”

“It went from that to this,” she said.

She was shocked by a vague response to the violence from the university leadership, which failed to address whether there would be more security on campus when she returned or even reassure for incoming first-year students or students still on campus now.

So the Cambridge rally was meaningful, Ellcock-Crayton said.

“It’s huge that Cambridge is actually doing a lot more that what UVA is doing. I’m not saying they won’t do anything,” she said. “But we did this almost immediately.”

Boston is not exempt from the negativity Simmons identified as becoming “an everyday occurrence.” Monday, as Cambridge rallied, Boston’s Holocaust Memorial was attacked for the second time in less than two months – after more than two decades without an incident. And white supremacists are reportedly gathering Saturday on Boston Common.

Black Lives Matter Cambridge is joining in a planned counter protest from 10 a.m. to 5:30 p.m. Saturday starting at the Reggie Lewis Athletic Center, 1350 Tremont St., Boston. It is open to all.