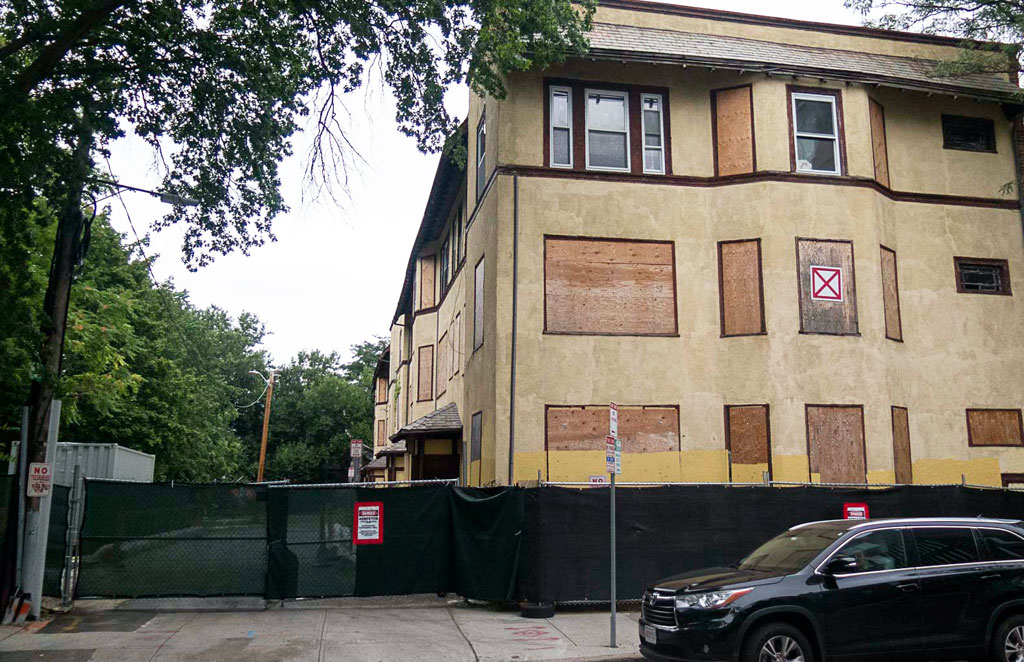 The derelict Vail Court near Central Square has been prepped for demolition Monday, but a court has barred work for now. (Photo: John Hawkinson)

The city has been blocked – at least temporarily – from tearing down Vail Court, two boarded-up, rat-infested buildings empty for more than a decade near Central Square.

The city acquired Vail Court off Bishop Allen Drive in September through eminent domain, intending to replace it with affordable housing. The current structure, condemned as unsafe and uninhabitable by a city board of survey, was scheduled to be demolished starting Monday. Now that will have to wait.

The order is in effect until Wednesday, when the judge will hold a hearing for a more permanent “preliminary injunction.” A review of the docket suggests the order was issued without hearing from the city.

It appears the city wasn’t aware of the order until Friday afternoon. At 11:47 a.m., it emailed an announcement that demolition would begin on schedule Monday morning.

City solicitor Nancy Glowa wrote in an email to city officials Friday afternoon that “We will vigorously oppose the motion and ask the court to allow the city to proceed expeditiously with the planned demolition and redevelopment of the property.”

Lisa Peterson, the deputy city manager, forwarded a copy of the court order and summons Friday afternoon, but did not comment on the litigation. The city closes for business at noon Fridays.

The order was requested by Said Abuzahra, who owned the property before the city’s seizure – approved with a $3.7 million payment to the owner for the property being taken. City councillors had sought action on the property for years after Abuzahra family members spent the better part of a decade in court squabbling over ownership and eventual development rights.

Abuzahra referred questions Friday to his attorneys, who could not be reached.

Abuzahra had also asked the court to grant him access to “view, inspect and relocate” property within the building, including furniture, clothing and appliances, all at the city’s expense. The court denied that.