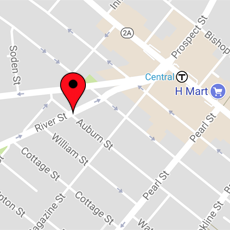 A shooting incident in Central Square injured two people – one in a knee, one in a hand – on Tuesday morning, and police are seeking a single suspect.

There was huge presence by police and other first responders on Auburn Street near River Street around 11 a.m., after residents reported hearing between four and seven shots fired at 10:46 a.m. near the intersection’s Enterprise Rent-a-Car location. Traffic was blocked temporarily on several streets as police investigated the scene and canvassed neighbors, asking about a bicyclist – a scraggly-bearded man in a red hoodie on a low, white bike – fleeing the scene, neighbors said.

That man is considered the suspect in the shootings, said Jeremy Warnick, director of communications and media relations for Cambridge police.

The man shot in the knee went to Cambridge Hospital on his own, taken in a red car, according to scanner reports, while the victim shot in the hand was taken to a local hospital by ambulance. The red car was in police custody, and the man who drove the victim was sought for questioning, Warnick said.

The victims were likely targeted, he said, which would suggest other Cambridge residents were not at risk. A “Secure and Hold” order was out in place as a precautionary measure at Central Square area schools, but was lifted by Cambridge police at around 1 p.m. “Building security will be back to normal, and schools will dismiss today as usual,” an email to parents said.