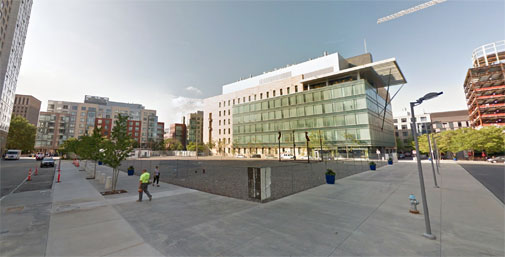 The 35,865-square-foot lot set aside for the Constellation Center in Kendall Square has remained empty – save for some sculpture in a fenced-in gravel pit – for two decades. (Image: Google)

A long-promised performing arts venue called the Constellation Center might look very different when it opens, becoming a mixed-use complex with ground-floor arts space topped by a tower of housing or business space.

“They’ve started marketing the property for potential development,” said Robert P. Reardon, director of the city’s assessing department. “They’re actively out there looking at other uses for the property, including them being on the site, but with possibly a commercial entity to it.”

As originally envisioned by founder Glenn KnicKrehm in 1996, the center would be a freestanding four-stage, two-organ music and film utopia, but estimates for bringing the vision about ballooned to $300 million from $35 million over the decades as KnicKrehm researched acoustics and aesthetics and tried to fundraise.

In the meantime, the space at Kendall and Athenaeum streets in Kendall Square has remained a fenced-in gravel pit surrounded by chain-link fence. A temporary park offered by KnicKrehm also failed to appear this year.

In March, KnicKrehm signaled an announcement “in a few weeks,” but no announcement arrived. Now developers are saying KnicKrehm and his Constellation Center nonprofit has been reaching out for pitches. “They’re looking at different options and having people present to them to see what would make the most sense to get the performance space completed and what other component would work well,” Reardon said.

The center’s 35,865-square-foot lot was set aside in 1999 as part of the 1.3 million-square-foot Cambridge Research Park, which included everything from corporate buildings for Genzyme and the former Vertex to the Watermark residential building and open space used for ice skating in winter. “All the other pieces were finished and brought online,” said Liza Paden, a project planner with the Community Development Department.

With that began the Constellation Center’s tax exemption. But after two decades of exemption as a proposed nonprofit arts center, the status is changing, Reardon said. The site returns to the tax rolls as of Jan. 1; an assessment in spring will attach a price tag for the valuable Kendall Square property for the first time since the 1990s. “We haven’t put a number on it yet,” Reardon said.

KnicKrehm was asked for comment Tuesday. This article will be updated if there’s a response.

Residents and officials approached last month hadn’t heard of the change in use, but were eager to see something happen with the site. Jason Alves, president of the East Cambridge Business Association, said the original planned center would “still be a great addition” to an area undergoing large-scale change on the East Campus of the Massachusetts Institute of Technology and at the neighboring 14-acre Volpe site, but expressed impatience.

“I hope something happens soon. I’m sure some small-business owners in the area would love to see a few hundred extra patrons when a show lets out,” Alves said. “The vacant lot isn’t helping anyone.”

Peter Crawley, a former leader at the East Cambridge Planning Team, simply wished KnicKrehm would be more engaged in planning efforts for Kendall Square as a whole. “This is a major site in a very active area that is currently undergoing intense development planning, including the Foundry (that includes performance space) and the Volpe development (that includes a community center). The best results can be achieved if projects are coordinated in terms of size, use and phasing,” Crawley said in an email.

The new developments out of KnicKrehm’s office had Reardon feeling optimistic.

“I’m feeling better about something happening down there,” he said. “It’ll be nice to see a nice development done in a way we get the performance space. It’ll be a nice addition to the neighborhood, I would think. So we’ll see.”