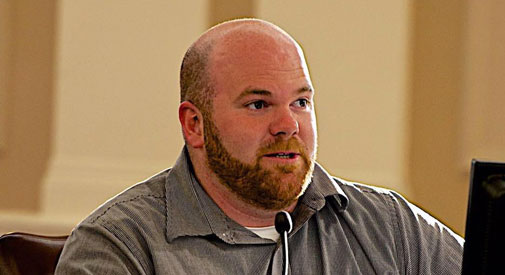 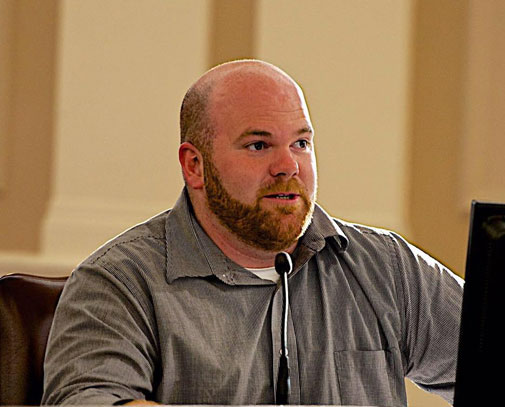 Matthew McLaughlin attends a summer meeting of Somerville’s Board of Aldermen.

In tackling regional political issues, city councillor Dennis Carlone has access to immediate insight: His legislative aide is Matthew McLaughlin, a member of Somerville’s Board of Aldermen.

McLaughlin, 36, a Somerville native, co-founder of the Save Our Somerville nonprofit and Iraq War veteran first elected as a Ward 1 alderman in 2013, has been on staff with Carlone for a little over a month.

“It’s been great, because he understands the issues exactly, he’s been through these issues,” Carlone said of McLaughlin. “People have said on housing issues that they want to reach out better, and I said, ‘Here’s your connection to Somerville.’ It’s good to know what other cities are doing.”

As an aide, McLaughlin is “gung-ho,” Carlone said, and “it’s been a wonderful blending.”

The unusual pairing was approved by Cambridge’s Law Department before McLaughlin was hired, City Solicitor Nancy Glowa said. In anticipation that there might be pushback – at least one Cambridge constituent was upset upon hearing of the hire – Carlone said he got ethics approval “because we wanted to make sure.”

“Alderman is considered a part-time job in Somerville. All of my colleagues have full-time jobs, some in state and municipal positions. I feel fortunate to have a job in a field I am passionate about,” McLaughlin said. “The hours are flexible and the commute is excellent.”

He deferred further questions to Carlone, saying he was “not here to make headlines, I’m just here to do a job.”

The presence of McLaughlin is being viewed as an asset around Cambridge City Hall, Carlone said, though it’s too early to point to a legislative example of the advantages. In Somerville – where McLaughlin faces reelection Nov. 7, just as Carlone does in Cambridge – the alderman is a member of committees on finance, public health and public safety, multicultural affairs and transfer charges, and he is chairman or co-chairman of committees on youth services, traffic and parking, veterans and public services, and rodent issues.

If reelected, Carlone said, he will be asking McLaughin to stay on as aide indefinitely. Meanwhile, McLaughin has an advantage in his own race for reelection: the support of state Rep. Mike Connolly – a friend who was also once legislative aide to Carlone.

Out knocking doors with Rep @MikeConnollyMA , wearing the same shirt. We're like Schwarzenegger and Devito. But only I can call him Devito. pic.twitter.com/YqcomzhFds