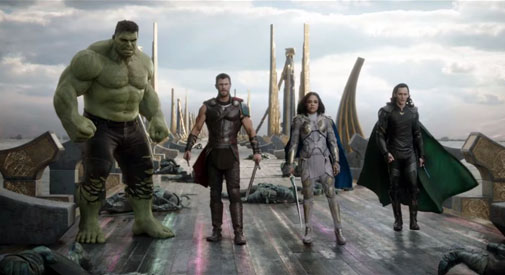 The “Ragnarok” of the title may have you scratching your head some, but early enough in the latest “Thor” installment we learn it’s the term for the apocalypse about to hit to Asgard, home of the Norse gods and heralded heroes. Can gods actually be terminated by mass extinction, you might wonder, once the prophecy is told. The answer to that comes in the form of fiery giant demon that typically lurks in the lower abyss of a Medieval-themed video game.

It’s probably best to forget your learned lore; this is the Marvel Comic universe, and a goofy, fun one at that. The handsome and hulking Chris Hemsworth again reprises his God of Thunder role with manly man bravado that’s comically undercut with a devilish dash of cheeky nod-and-wink deprecation. This deity is just as happy to solve a disagreement over a beer as he is to smite the opposition with his mighty hammer. His good-natured, turn-the-other-cheek-first attitude, rounded out with hangdog friendliness, endears. It’s a winning combination that makes the “Thor” series more engaging than, say, a “Captain America” chapter. Levity may be more essential to saving the universe than teeth-grinding grit – just look to the original “Guardians of the Galaxy,” which won audiences on so many levels.

Of course Thor, in his defense of the realm, has one heck of a backup team: the Hulk (a CGI image, and Mark Ruffalo when in human form), his double-crossing brother Loki (Tom Hiddelston) – what else would you expect from the god of mischief? – and boozed-up warrior Valkyrie (Tessa Thompson). Also in the mix as papa Odin we have the estimable Anthony Hopkins and, as Thor and Loki’s sister who’s been sent to the corner for a near-eternal timeout, Cate Blanchett as Hela (she’s absolute Hell), the goddess of death who looks like Maleficent on steroids.

The intoxicatingly strange brew – the third “Thor” flick, and sixth Marvel film that the Norse god has appeared in – gets nicely stirred by quirky New Zealand auteur Taika Waititi, who’s helmed such idiosyncratic ditties as “Hunt for the Wilderpeople” (2016) and “What we do in the Shadows” (2014). And if that’s not enough, Doctor Strange (Benedict Cumberbatch) pops in briefly to pull Loki and Thor through a portal in Manhattan. The reality-bending interaction between the three is so pickled and pleasing it nearly sets the rest of the film up for failure. The best, however, is Jeff Goldblum as an entity referred to as the Grandmaster, an omni-powerful being on par with Hela, but one who takes far greater joy in his station, hoisting gladiator contest on a trash heap of a planet called Sakaar. Thor and the Hulk get pitted in the ultimate fight contest. It’s a juicy role akin to Stanley Tucci’s Caesar Flickerman in “The Hunger Games” and he bites in deep. Blanchett does too, and Hemsworth cements it all together in a rollicking good time that, predictably and somewhat sadly so, ends in a CGI slugfest.