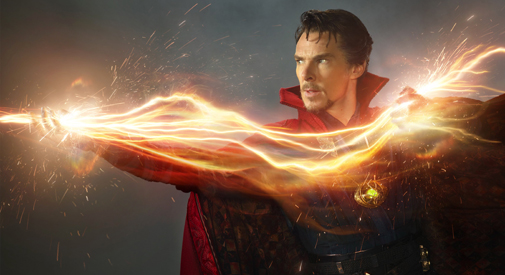 What is it about superhero movies that takes top-shelf thespians and reduces them to two-dimensional ashes? Patrick Stewart was able to maintain his poise in “X-Men,” and Robert Downey Jr. formed an amiably snarky extension of himself as brash billionaire Tony Stark in “Iron Man,” but mostly actors slap on the muscle suit and spout platitudes. Don’t get me wrong – I love seeing Chris Evans square-jawed and righteous as Captain America, but what’s he like first thing in the morning? Is he a grump, does he loosen up after two beers, and does he ever have a bad hair day? Answers mortals need if they’re to relate. 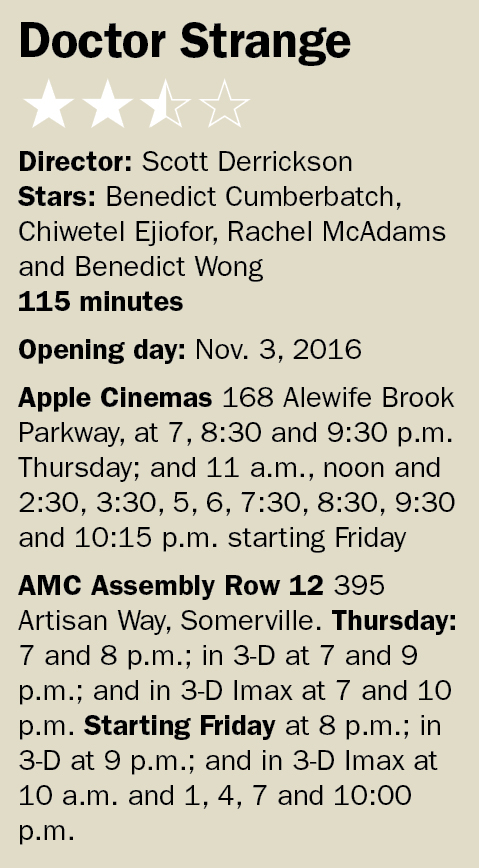 For all their power and pop, these tales of the übermensch are pretty pat affairs; backstory and arch-villain, that’s how they go, a two-step do-si-do. “Doctor Strange,” sadly, is no exception, despite the more cerebral and human orientation of its protagonist and the inspired casting of Sherlock Holmes himself, Benedict Cumberbatch, as the doctor. It’s not for Cumberbatch’s lack of effort, but anytime you have a team of writers – three, in this case – tying to communally distill the tortured essence of an uber-being grappling with a newly acquired superpower, loss of former self and world annihilation by some unhinged megalomaniac with his hand on the button and a battalion of minions on call, you’re in a dark place. And we’re not talking about inner conflict.

The film begins promisingly enough, with Cumberbatch’s Dr. Stephen Strange showing off his cutting-edge skill as a neurosurgeon – grandiloquently so. He’s an arrogant can-do with a god complex, and would either bond immediately with Downey’s Tony Stark at a cocktail reception or get locked in a nasty head-to-head vying for the alpha male spot. Everything’s hunky-dory – there’s even playful banter and a spark of romance with the fetching, overworked ER doc (Rachel McAdams) – until Strange’s Lamborghini goes off the road, the result of distracted driving (looking at cranial scans while bobbing and weaving at 100 mph). In the crash, the doc’s life-saving hands are shattered, recovery is frustratingly slow and no procedure, no matter how experimental, can get him back to his scalpel jockey self. Broke and broken, Strange heads off to Kathmandu after hearing of a mystic cult where the mind heals the body.

Wandering cramped alleyways, Strange encounters a posse of street thugs who welcome him to their country with a beatdown until a hooded form – a monk of sorts by the name of Mordo (Chiwetel Ejiofor, not getting too much to work with) intervenes. After some preliminary banter about “forgetting everything you think you know,” Strange gets passed to Mordo’s higher-up, the Ancient One (Tilda Swinton, looking vibrant and ageless), an eternal elven sensei who knocks the skeptical Strange out of his corporeal form and into the astral plane for a brief tour of the universe – a trippy sojourn clearly inspired by the phantasmagoric denouement in Kubrick’s “2001: A Space Odyssey.”

It’s in this parallel universe that we learn there are dark forces at play and enlightened beings such as Mordo are assigned as sentinels to keep the material world safe. You might roll your eyes some, and rightfully so, but it’s also here that the director Scott Derrickson, helmer of such B-side creepers as “Sinister” and “Deliver Us From Evil” gets to borrow a few pages from Christopher Nolan’s “Inception” and Escher as buildings and roadways fold in on each other with devilish effect. Among the inverted skyscrapers looms the rotten apple Kaecilius (Mads Mikkelsen), one of the Ancient One’s former disciples, and his SWAT team of minions, who prove to be quite good at parkour in the astral plane, as well as a threat to all of humanity.

The film’s shining moments are its most comical, as Strange jousts with a crimson red cloak of levitation that has a mind of its own and can lay a beating on a baddie in its non-donned form. McAdams breathes an astonishing amount of fullness into a slim role as a warmhearted surgeon who remains on tap to mend Strange after scrapes with Kaecilius. There’s a lot that goes on in “Doctor Strange,” including tie-ins to other Marvel offerings that are clearly seeds for box office fruit down the road. It’s not as fresh and sassy as “Guardians of the Galaxy,” but it is a piquant changeup for fans who have come to find the “Avengers” series getting long in the tooth.