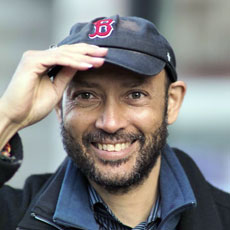 Born in Suriname, a small country in South America that is 90 percent Amazonian rainforest, a teenage Quinton Zondervan saw his country taken over by a dictatorship. His family fled to the United States, where he realized his dream of studying computer science and mathematics, at first at Eckerd College in Florida for a bachelor’s degree and at the Massachusetts Institute of Technology for a master’s. “I fell in love with Cambridge and never left,” he said.

Though he works as a senior executive in software and biotech, he is most known in Cambridge for his work in sustainability, including as president of Green Cambridge and the Climate Action Business Association. He has served on the city’s Climate Protection Action Committee for nearly a decade, including three years as committee chairman, when he advocated for a climate vulnerability study, plastic bag ban and, very recently, the goal of 100 percent renewable energy citywide by 2035.

He most proud, he said, of the zoning petition co-written in 2013 with now state Rep. Mike Connolly that resulted in the Net Zero Action Plan to reduce city emissions from buildings to zero over the next 25 years. “Since building emissions account for 80 percent of the total emissions in Cambridge, it is extremely important that we implement this plan as quickly as possible,” he said.

He and wife have two children, both attending Cambridge Rindge and Latin School.

Improving the sustainability and efficiency of public transit options throughout the city.

Cambridge Residents Alliance: “Quinton Zondervan is a bold business leader and environmental advocate who uses his technical and organizing skills to take action on climate change through local policies. He is president of Green Cambridge and co-author of the Net Zero Action Plan to reduce greenhouse gas emissions from buildings in Cambridge. He wants to increase housing opportunities by requiring universities that do commercial development to sharply increase on-campus graduate student housing.”

Zondervan is such a known presence in Cambridge politics that some might think he’s already a city councillor, or has been; his successes in getting sustainability into the public conversation and keeping it there certainly suggest he’d be an effective one. He knows the players on a first-name basis. They’ve invited him on stage with them at City Hall.

But with the harshest realities of climate change bearing down on Cambridge and the region with growing speed, it may be time to make that relationship official. There is no better candidate to have working with city staff to ensure Cambridge survives what’s coming and innovating solutions to share with neighbors to keep the floods out and heat-related deaths at bay. Zondervan brings experience, relationships and a record of environmental successes to the table, and he has proven a thoughtful critic of the affordable housing crisis as well (even if not everyone agrees with his findings).

While not a single-topic candidate, Zondervan should be ranked high on the ballot by people on all sides of the real estate debate who worry they’ll be wading through their home or apartment come 2070.