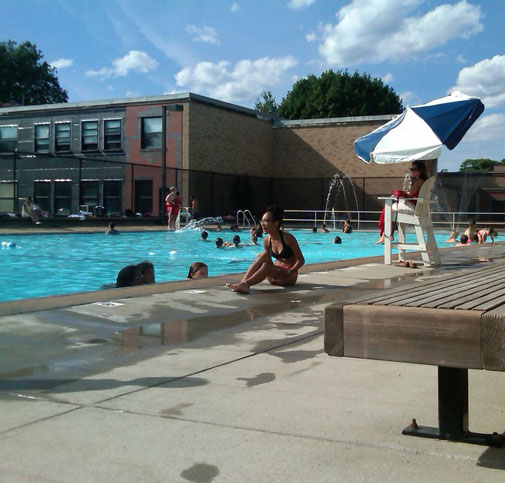 One official sums up: ‘We are not well prepared’ on critical services
By Marc Levy

Children play at the Gold Star Pool in the Wellington-Harrington neighborhood during a hot summer day – the number of which will be growing in coming years. (Photo: Shirley Y. via Yelp)

A “climate stress test” shows that while Cambridge isn’t vulnerable to significant storm surge risks through the year 2030, residents can expect a tripling of days with temperatures over 90 degrees Fahrenheit from the current 11 – and by 2070, nearly three months of expanding areas of 90-plus-degree weather, with conditions on hot days becoming dangerous to public health.

The findings of three years of study by an interdepartmental team of city staff, interdisciplinary consultants and an Expert Advisory Panel drawn from area universities and other advisers were released Monday in the first part of “The CCVA Report: Climate Change Vulnerability Assessment.”

The costs to the economy, public health and livability of the city described in the assessment are based on the scenario of no action being taken, but city officials said they are identifying strategies to manage the effects of climate change. They are to be reflected in a Climate Change Preparedness and Resilience Plan, and then in a citywide development master plan.  “Until recently, we have been able to plan the future based on the climate of the past. We can’t do that any longer,” said Iram Farooq, the city’s assistant city manager for community development, in a press release. “This assessment gives us a way to factor climate change into our planning decisions.”

The report is being released as the United Nations Conference of Parties climate summit starts in Paris, city officials notes, and while some impacts of climate change are unavoidable, the worst can still be prevented by decisive international cooperation on reducing greenhouse gas emissions, the primary cause of climate change.

Still, two previous attempts at global cooperation on limited climate change failed, and city officials acknowledged there’s much to be done to prepare for the oncoming effects either way, including increasing rates of rainfall that could cause flooding from the Alewife Brook overflowing its banks, sea level rise and storm surges – including backups in storm drainage systems throughout the city.

For the next 15 years, the study finds, Cambridge is protected from significant storm surge risks due to its position behind the Charles River and Amelia Earhart dams. The storm surge risks modeled for 2070, when sea level may rise at least three feet, will be presented at a public meeting from 6:15 to 8:30 p.m. Thursday at the Cambridge Main Library, 449 Broadway, Mid-Cambridge.

“We have to start working”

The city needs to prioritize the vulnerabilities to increasing heat and precipitation before the threat of sea level rise, officials said.

“When we think of climate change, we usually picture sea level rise and flooding,” said Sam Lipson, director of environmental health at the city’s Public Health Department. “A major finding of this assessment is that Cambridge’s vulnerability to increasing heat and interruption of critical services like mail, food and medication delivery will escalate rapidly during a major event, and this is a scenario we are not well prepared for yet. This means we have to start working on increasing our resilience to rising heat now.”

“Our storm water infrastructure – the pipes, manholes and catch basins – are designed for the storm patterns of the past,” said Owen O’Riordan, commissioner of public works. “Climate change is forecasted to cause significant increases in the rate of rainfall, which would lead to expansion of the areas at risk of flooding and the depth of floods. We will need new strategies to deal with future conditions.”

The study used projections of temperature, humidity and precipitation to look 15 and some five decades ahead, but also noted some ominous developments in weather in years past, including the eight-day heatwave that hit in 2002 and “Superstorm” Sandy wreaking havoc up the East Coast in October 2012.

Meanwhile, it charted Cambridge’s involvement in climate change preparedness dating back to it joining Local Governments for Sustainability back in 1999 and adopting a Climate Protection Plan in December 2002, then hosting a Climate Emergency Congress in December 2009.

“The Climate Change Vulnerability Assessment was originally supposed to completed in the year 2013 – but here we are about to enter the year 2016, and the city administration is still talking about ‘working on getting the scope in place for the preparedness and resilience plan,’ according to a recent email I received,” said Mike Connolly, who led the grassroots effort to establish a net zero carbon emissions standard for the city despite initial wariness from developers and the Chamber of Commerce. “My hope is that the next phase of the process is completed with an even greater sense of urgency and timeliness – because the vulnerabilities are real right now, and we are adding millions of square feet of new large-scale development in East Cambridge, Kendall Square and in the Alewife area, some of the most vulnerable sections of the city.”

“It is absolutely wonderful that the city administration is taking these matters so seriously … That said, we are not doing nearly enough and we are not acting nearly fast enough to achieve our goals. This vulnerability assessment will be completed in 2016, nearly a decade after we as a city collectively realized we would need it. We cannot afford a similarly plodding pace when it comes to planning and implementing protective measures. We need to act fast and put in place enough resources to respond to the rapidly changing conditions we now face.” 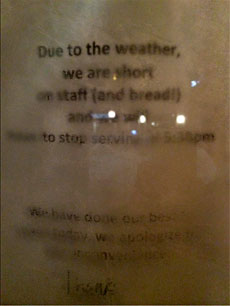 A sign at the Cosi in Kendall Square, barely readable through icy glass, tells customers of an early closing last winter resulting from a shortage of staff and bread. (Photo: Munehiko Sato)

Resident and environmentalist Susan Ringler, who was among those arrested last year trying to block the destruction of trees in Belmont’s Silver Maple Forest, said she was glad to live in a city that had at least started planning for climate change, but worried that the report’s attempts to quantify loss and risks “really miss the unfortunate fact that those living on the brink – working several jobs, in debt, in poor health – can be devastated by missing work for a few days or a week [as a result of a weather crisis]. Their lives can be ruined.”

While the report warns that the loss of business for a day created a loss of $43 million for Cambridge’s 128,000-job economy, the city’s small businesses were the most vulnerable. “The way the questions were framed does not capture the difference between a small local business that has insufficient resources to restart, and a large business that suffers some loss of profitability but  easily continues in business,” Ringler said. “It really doesn’t matter how much money is lost in a day of a power outage, but rather how many businesses are on the brink, and must close for months, or perhaps forever.”

Some of that vulnerability was seen last winter, when 95 inches of snow – the other potential side of climate change for the region – shuttered businesses for days and made for uncertain hours and worker commutes. Vice mayor Dennis Benzan said many were “almost on the verge of bankruptcy after three weeks of no business.”

Connolly stressed the need for legislation at the state level, such as Comprehensive Adaptation Management Planning legislation mentioned in the day’s Boston Globe.

“Transit, particularly subway and commuter rail lines, are vulnerable to heat and may pose a risk from failure during future extreme heat events. Asset failures would likely result from rail exposure to extreme heat, which could cause damage to rails (rail buckling, sun kinks) or supporting electrical equipment. It is also important to note that while subway cars have air conditioning, the subway stations do not.”

It agrees an “unprecedented level of coordination and cooperation” will be needed among agencies, cities, the state, businesses, institutions and residents to prepare effectively for climate change.

Zondervan, meanwhile, said shortly before heading off for the last week of talks in Paris that he saw one of the biggest challenges in doing planning “that is both protective and sustainable,” giving as an example coping with extreme heat with cooling centers – more air conditioning capacity. “To provide that level of protection without making future climate change even worse, we need to power our city with 100 percent renewable electricity as soon as possible,” he said.

City Manager Richard C. Rossi said the city had gathered the “best available” science and experts “to build a solid foundation for our preparations for climate change. We will make Cambridge a more resilient community.”