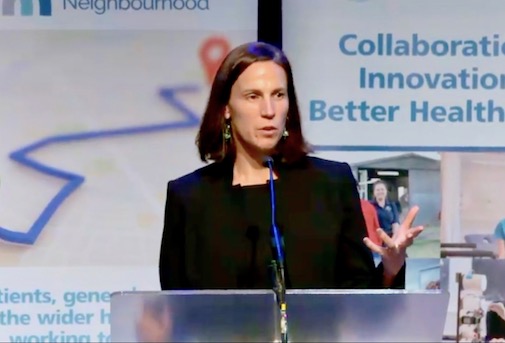 Dr. Kirsten Meisinger, seen speaking at an April conference, has considered a silver lining in a drop in patient volume at Cambridge Health Alliance locations.

The bottom line looks good for Cambridge Health Alliance after the first quarter of this fiscal year. The Alliance is $8.2 million in the black, twice as much as forecast and continuing a trend of moving toward financial stability.

Yet doctors at the safety-net health system, which serves large numbers of the poor and uninsured, are seeing fewer patients than expected, and officials are worried about it.

The budget for this fiscal year, beginning July 1, forecast more visits by patients to doctors’ offices compared with last year, and essentially no increase in hospital admissions. Neither goal has been met as of the end of September. In fact, volume for the first quarter of this fiscal year is lower than last year at this time, according to the Alliance’s monthly financial report.

Outpatient visits were off by 8 percent compared with the budget, and 2.8 percent below first quarter last year, the report said. Hospital volume lagged the budget by 4 percent, and last year’s first quarter by almost 7 percent.

Spokesman David Cecere said managers are “actively working” to “identify barriers to achieving budget volumes.” Efforts include bringing new staff “on board” and examining how the system schedules appointments, he said. As newly hired employees start working, “we anticipate that additional access and volumes will be realized going forward,” Cecere said.

At the meeting, Dr. Kirsten Meisinger, a primary care doctor and president of the medical staff, questioned whether lower hospital admissions might be a good thing. Many doctors and health systems are trying to prevent illness instead of waiting until patients get sick and then treating them. “Which admissions are really ‘happy’ ones?” Meisinger asked.

“Every admission is a ‘happy’ one, even in an ACO,” Batty replied. ACOs, or accountable care organizations, aim to improve care and cut costs, in part by reducing hospital admissions.

Behind the good news

If volume is off so much, why is the Alliance reporting such good financial news? Some reasons aren’t reassuring.

During the first quarter, CHA received $3.5 million in revenue from last year, a one-time occurrence. The Alliance also saved about $4 million in expenses because it didn’t hire as many doctors and other staff as budgeted, according to an explanation provided by Batty.  It helped the bottom line, but “that’s not what we wanted,” Batty said.

The Alliance expected to hire an additional 28 doctors and 142 support staff during this fiscal year, partly because of anticipated growth in services. Details about where hiring fell short so far weren’t provided. Unwelcome vacancies also improved the financial picture in the 2017 fiscal year.

This year, some physicians who were offered jobs backed out after initially accepting, Batty said. “That’s unusual,” she said. In addition, insurance companies may take a long time to approve credentials for some hires, delaying when they can start, she said.

DePasquale said the vacancy problem and the explanations were familiar. “Every year we have this discussion,” he said. “We never have the people in place when we expected … We gotta know sooner rather than later what we may be facing.”