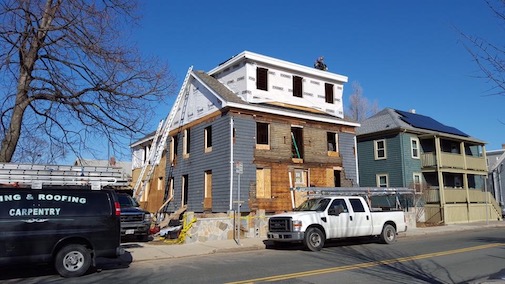 A new regional 14-city housing partnership has formed to speed housing construction throughout the Boston metropolitan region – with a focus on building a variety of unit sizes near transit and in walkable areas, and on reducing evictions, eliminate unfair rental practices, mitigating displacement and creating permanent housing for the homeless.

It was announced early Tuesday by cities and towns of the Metropolitan Mayors Coalition of Greater Boston, which includes Cambridge, Somerville and Boston.

“In any regional conversation about housing, Cambridge is a state leader and needs to play a leading role in that conversation,” said vice mayor Marc McGovern, who has worked with neighboring cities on a regional approach to homelessness.

The work of the coalition will be facilitated by the Metropolitan Area Planning Council, the regional planning agency for Greater Boston, which includes 101 cities and towns.

The council published a report in 2014 identifying housing construction goals that would “help ensure that every household in the region can afford a home,” and it identified Cambridge’s goal as 6,200 units of housing by 2030. But Mike Connolly, now a state representative but then legislative aide to city councillor Dennis Carlone, noted that even as of mid-2015, Cambridge had already surpassed that figure in finished units or those permitted or under construction.

More units have been added to those figures in Cambridge in the past year and a half.

It has since become obvious that production of the half-million new housing units needed in the coming years is coming mainly from already densely populated cities such as Cambridge trying to build more to keep down housing prices. “We’re still building less than half as much housing as we did when we had a smaller population in the 1960s, ’70s and ’80s,” CommonWealth magazine said in March 2016, and virtually no housing construction is going in most of the state.

Connolly called it “a welcome development” and was glad to see some of his long-held concerns being more widely recognized, including “the disparity where you see housing production in the immediate urban core of cities like Boston, Cambridge and Somerville and a real lack once you get beyond that core.”

The wide range of policy approaches in the 14 cities and towns will make watching the partnership interesting, he said, “but it can only help to get officials talking to each other.”

“Limited housing supply [also] means employers have a harder time recruiting and retaining workers. Housing has a significant impact on our region’s economic health and future,” Draisen said. “And we need housing that works for a variety of household types and incomes, from renters to first-time homebuyers to families with children, empty-nesters, seniors and those with disabilities.”

The partnership will create a regional work plan from a housing production goal with goals and timelines for each of the 14 communities, which also includes Braintree, Brookline, Chelsea, Everett, Malden, Medford, Melrose, Newton, Quincy, Revere and Winthrop. The group will be led by Boston Mayor Martin J. Walsh and Somerville Mayor Joseph A. Curtatone, according to an embargoed press release sent late Monday.

“Our entire region is facing and must solve the same pressing challenge: Metro Boston’s affordability crisis and its limited housing stock. But the solutions cannot be one-size-fits-all, which is why this task force is so critical,” Curtatone said in the press release. “It will give us the opportunity to work together toward our common housing goals while tailoring solutions to our communities’ unique needs and tapping the brightest minds in our housing-related sectors to assist us in our work.”

The group will recommend changes to zoning, local policies, funding calculations for state aid toward public schools and other tools, Walsh and Curtatone said in the press release.