‘The Shape of Water’: Underwater love tale is a finely acted and truly immersive fantasy 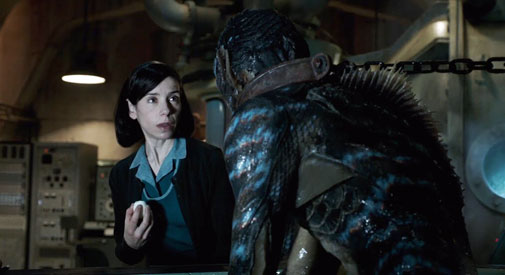 ‘The Shape of Water’: Underwater love tale is a finely acted and truly immersive fantasy

Guillermo del Toro returns to fine form with this fairy tale-cum-horror story that effectively echoes the texture, mood and style of his 2006 gem, “Pan’s Labyrinth.” Appetizing as that sounds, “The Shape of Water” doesn’t quite have the fullness or magical immersion of the Mexican auteur’s crowning achievement (to date) – but that’s a mighty yardstick for any film to be measured by. 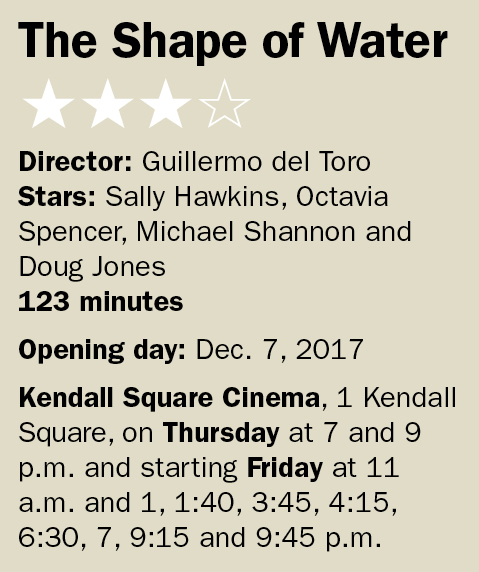 Set in Cold War-era Baltimore, the narrative flows through the mundane life of a demure, mute cleaning woman named Elsa (Sally Hawkins, who lays it all on the line and should be recognized for such a fine effort), who we learn grew up an orphan and was abused as a child. Given all that, Elsa’s got pretty neat digs above a classic nickelodeon (and del Toro has fun with the marquee and features it plays) and works the nightshift at a secretive military installation where all kinds of strange experiments growl and bark from behind steel doors – often requiring a SWAT team of cleaners to mop up the bloody aftermath.

Locked behind one such portal is an amphibious humanoid referred to as “The Asset,” something of a sleeker version of the Creature from the Black Lagoon if crossed with Abe Sapien from del Toro’s raucously fun “Hellboy” films. Chained and shackled in a pool, the creature is routinely beaten and electrocuted by a square-jawed operative named Strickland (Michael Shannon) who fished it out of the murky waters of South America. Strickland goes after his charge with all the oppressive superiority of a plantation owner, and Shannon’s natural southern drawl helps sell the notion. If there’s any question as to what del Toro is aiming for, there’s a scene at a diner where a black couple are not allowed to sit at the counter and Elsa’s next-door neighbor, Giles (Richard Jenkins), exists deep in the closet and is shunned regularly for his quirky “difference.” Then there’s Elsa’s understanding work partner, Zelda (the ever-affable Octavia Spencer), an African-American woman. In short, everyone around Elsa who gets her is disenfranchised or oppressed. They’re a merry band of outliers, a not so subtle sociopolitical subtext – that feels a bit too strapped on – and the most robust and likable of all that come across the screen.

Of course Elsa and the creature make a fast connection (who knew hard-boiled eggs were the best way to an alien’s heart?), but it’s not your typical beauty-and-the-beast archetype (think King Kong). It’s much more intimate, as the two not heard by the larger population become able to communicate with each other – and it becomes romantic too. If you stop to giggle at that, don’t. Later in the film there’s a bold, yet unwise, fantasy song-and-dance number that’s the real cause for pause, while the relationship between Elsa and the creature blossoms, palpable and true and beautifully framed, especially when their moments together become physically intimate (yes, lovemaking). It all works credibly, thanks mostly to Hawkins’ unbelievably bare and brave performance. Without words, she’s loudly ebullient and expressive – provocatively so – and puts us in the moment (part of Elsa’s routine includes languorous moments of self pleasure during her bath each morning).

Del Toro gets fine performances out of the rest of the cast as well. Shannon, with his bristling, idiosyncratic machismo, makes the two-dimensional Strickland compelling enough, and Michael Stuhlbarg brings a humane touch to the chief scientist conflicted between political allegiances and the pursuit of science, especially when the military wants to dismember the creature to analyze its regenerative powers and ability to breathe on land and in water. As the amphibious man, Doug Jones, who’s enacted creatures of wonderment for de Toro before in “Hellboy” and “Pan’s Labyrinth,” doesn’t get much to say, but looms gloriously as the film’s carefully curated centerpiece. Also major wins for the noirish ambiance and Dan Laustsen’s dark, lush cinematography.

By the final ebb of the narrative tide, “The Shape of Water” has mixed a lot in – deities, demons, lore and humans’ own sense of self in the universe. It’s a brackish, muddied ebb, but tight, and in its heart it remains a good old-fashioned romance – in which the guy requires 1,000 gallons of saltwater and the girl just needs to be heard by her partner.