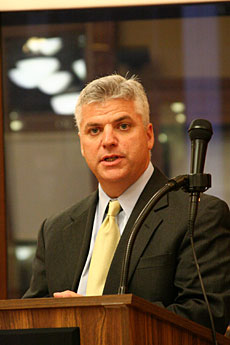 Two men on a May crime spree were nabbed trying to go through airport security with bags full of cash, prosecutors say, and are now awaiting court dates.

The three motor vehicle thefts and six commercial burglaries last year at sites ranged as far north as Woburn and as far south as Brockton, Suffolk County District Attorney Daniel F. Conley said Wednesday. The spree was committed by a group of friend who flew in for an NBA playoff game between the Boston Celtics and Cleveland Cavaliers, according to The Associated Press.

Fredrick D. Williams, 29, of Dallas, was indicted Dec. 20, but only extradited Tuesday to Massachusetts and arraigned in Suffolk Superior Court after being arrested on a fugitive warrant by Texas authorities. With bail set at $500,000 cash, Williams is being charged with six counts each of breaking and entering at night with intent to commit a felony, breaking into a depository and malicious destruction of property; four counts of larceny over $250; two counts of attempted larceny over $250; three counts of larceny of a motor vehicle; and one count of possession of burglarious instruments.

The group stole a van in Woburn early May 18 and broke into two businesses, damaging an ATM and stealing a safe from an Everett gas station. They fled a Cambridge gas station after triggering an alarm, stole a second van in Mattapan and broke into a Dorchester gas station, trying to pry open two safes but fleeing when another alarm sounded, prosecutors said.

Early May 19, they took part in the theft of a third van in Stoughton and break-ins at three convenience stores in Brockton, where they stole two store safes and two ATMs, prosecutors said. At each locations, the burglars used large wrecking bars and a sledgehammer to pry open locked depositories.

Later that day, prosecutors say, Williams and Gallagher were among a group of men questioned at a security checkpoint at Logan Airport when screeners spotted more than $50,000 in cash in their carry-on bags. In the investigation that followed, police and prosecutors obtained security video at each of the various locations, phone and cell tower records and additional evidence leading to last month’s indictments, Doherty said.

Williams was represented today by attorney Andrew Stockwell-Albert. He returns to court May 14.