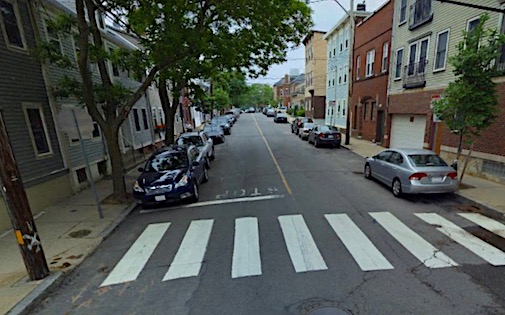 Gore Street is due for construction for sewage passing through from the Cambridge Crossing development. (Photo: Bing)

The residents of Gore Street in East Cambridge will get a year or more of torn-up asphalt and construction noise so the waste of thousands of people in Cambridge Crossing can pass through on its way to the Deer Island Sewage Treatment Plant.

Several residents came to the City Council on Monday hoping to be spared the loss of parking and sleep and to ensure their homes’ 200-year-old foundations were safe from being shaken apart.

“The residents are furious. There is a sense of outrage,” said Lois Sullivan, one of nine speakers expressing concerns for a narrow street where houses date back to the 1800s. “We ask you to please consider another route. There must be an alternative.”

But the choice wasn’t up to the council – and was barely a choice at all, because the city struck out on finding another direction for the waste to travel.

“I’m sorry to say to the people of Gore Street that this is route we have to take,” City Manager Louis A. DePasquale told councillors. “This has really come in front of you as a notification, not really for a vote, to be very honest.”

“I don’t want to leave any false expectations for the residents,” DePasquale said.

Nowhere else to go

Cambridge Crossing, the 45-acre former rail yard that until recently was being redeveloped under the name NorthPoint, is undergoing a renewed spate of construction by DivcoWest after a halting history dating back decades, including a 10-year work stoppage. While Gore Street residents and councillors expressed dismay that the city had known about the sewer work for 20-plus years without notifying them, city officials said that lost decade was a large part of why. The first buildings to go up didn’t require a new sewer connection; the next ones do, the officials said.

The city twice asked permission to send sewage to the Massachusetts Water Resources Authority’s Prison Point Facility, a more direct flow to the east of Cambridge Crossing, but each time was turned down. The new flow of waste would exceed the Prison Point Facility’s capacity and risk its federal permitting, state officials told Cambridge.

Directing the sewage along Monsignor O’Brien Highway would take longer and put city infrastructure on a road where any maintenance would require state permits and a management plan for “high-volume” traffic, said Kathy Watkins, city engineer, in an October memo.

“We know how to do this”

DePasquale, Watkins and Department of Public Works commissioner Owen O’Riordan did promise the Gore Street residents that they would ensure the contractors hired by DivcoWest worked as quickly but safely as possible. Their engineers will also assess homes on the street to prevent damage from the work, estimated in September to cost $10 million. Construction is expected to begin in March; as that winds up, a $2.7 million street reconstruction process will begin.

“We do this. We know how to do this. We dig up streets all the time for water mains and sewer connections. Some take longer than others, [but] this is nowhere near the work that was done in West Cambridge,” DePasquale said, referring to an elaborate $100 million roadwork project that began in the fall of 2012 and dragged on, more than a year behind schedule, through 2017. “We are committed to do this quickly [and] will do everything we can to limit inconvenience.”

O’Riordan had similar assurances. “We recognize it’s really disruptive, that there’s dust issues and noise issues, but in terms of the scale of projects, this is relatively modest,” he said. “This project is one that needs to go forward.”

A century-old Eversource gas main will be replaced at the same time. An 1874 water main will be replaced. And typically Public Works seizes the opportunity of an already ripped-up street to replace lead pipes running water to homes as far as the sidewalk; on Gore Street, where there are no front yards, “the additional level of work is pretty minimal, and we’re working toward including lead service all the way to the actual house,” Watkins said.

The final phase of work will be reconstructing the sidewalks and street design, and city staff will meet with residents again to decide what changes might be made – potentially even making Gore Street one-way, Watkins said.

Mayor Marc McGovern, a Central Square resident who’s lived through more than two years of roadwork on Western Avenue and expects more of the same on River Street, tried to find a silver lining: “I’m glad we can do the infrastructure we can do in this city, because there are cities all across the state and country where bridges are crumbling and roads are crumbling and schools are crumbling and they don’t have the resources to do it.”

“With that said, it is a huge inconvenience and impact that is mitigated when it winds up being better for you” – and in the case the benefits will go to the residents of Cambridge Crossing, McGovern said.

The developers should work with Gore Street residents to find a way “that the community actually feels there was something better for them as an outcome,” he said.