‘Annihilation’: A wild and hungry landscape threatens all, starting with the team’s sanity 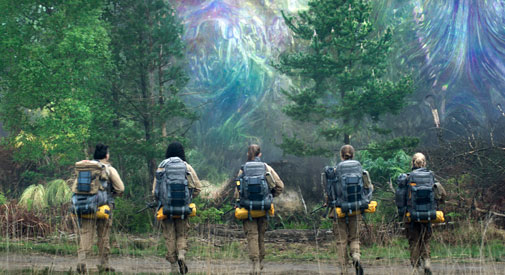 ‘Annihilation’: A wild and hungry landscape threatens all, starting with the team’s sanity

Thrumming, enigmatic strokes drive this riveting followup from Alex Garland, whose 2014 directorial debut, “Ex Machina” put sci-fi fans and cineastes alike on their toes. As a scribe, Garland’s penned such near-future nightmares as “28 Days Later” (2002) and “Never Let Me Go” (2010), and in all has demonstrated a keen eye for character, even as the world disintegrates around those characters. “Annihilation” is more of the same, and pulls in shards from such classic sci-fi staples as “The Thing,” “Alien,” “2001: A Space Odyssey” and one or two others that shall remain nameless, because to mention them might just be a spoiler. 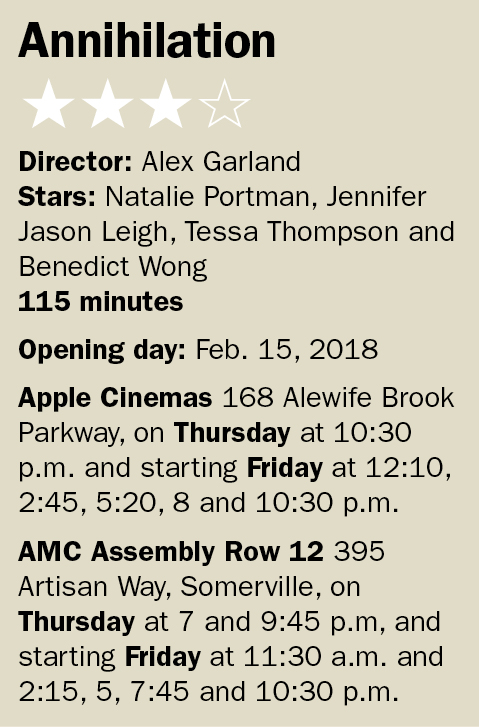 In “Ex Machina,” the ladies get the last laugh on the guys; here too the tale’s more about female resolve than male bravado. The five women who venture into Garland’s void exhibit plenty of steel under fire, until they start losing their minds – literally. After a brief glimmer of a meteor striking a coastal lighthouse, the film dotes on the emotional throes of a widow (Natalie Portman) struggling with accepting that her husband (Oscar Isaac), a special forces officer missing in action for a year, is likely dead, as well as the guilt of the affair he unearthed on the eve of his departure. Things feel like a dramatic downer, but one night he shows up, something of a zombie, a bit washed-out, disoriented and unable to give answers other than “I don’t know.” We’re hooked.

Without giving away too much, Portman’s Lena, a former Army grunt (it’s where she met hubby), now a biology professor at Johns Hopkins, gets whisked off to a high-security facility near that lighthouse where a magnetic phenomenon referred to as “The Shimmer” has created a force field around a section of swamp known as “Area X.” Quarantined by the military, Area X has swallowed up everyone and everything that has gone in, except one person – and is expanding, slowly and gradually, with the promise of consuming all. The facility head charged with studying and trying to stop The Shimmer, Dr. Ventress (a matter-of-fact Jennifer Jason Leigh) assembles a team to go in, theorizing that what’s inside may trigger a madness that has less effect on women. Lena signs on.

The Shimmer itself is a glassy prism of psychedelic colors, and inside are lush green lands and boggy fens – tranquil and beautiful to behold for a moment. Each day the women wake and count their rations to see how many days they’ve been in. It seems The Shimmer erases their short-term memory, and while they can’t remember pitching their tents and going to sleep, they can recall quantum theorems. In short, it’s the bad acid trip version of “Groundhog Day.” Of course no comms or compasses work. Further in, plants grow into human form, an alligator has shark teeth and the team finds a videotape from the lads from the previous mission. Danger comes from every side – even within, as sanity becomes increasingly elusive.

Folks who were held rapt by the atmospheric orchestration of “Ex Machina” are in for a treat; Garland has reassembled much of his crew from that film. Cinematographer Rob Hardy captures the grassy lowlands and deteriorating structures overgrown and reclaimed by Mother Nature in vibrant and verdant strokes, and the pulsating – almost alive – techno score by Geoff Barrow and Ben Salisbury underscores and raises the sense of imminent peril in every frame. Based on the novel by Jeff VanderMeer in the first of his “Southern Reach” trilogy, you can’t help but think that in adapting the pulp, Garland has infused The Shimmer suffer with a meta-existential sheen as those inside get closer to the truth (the lighthouse: beacon of truth) as a means to probe the bigger conundrum of humans and their place in the universe.

“Annihilation” holds you on the edge of your seat from start to finish. (And has a few scenes that may make you look away, too.) It’s also incredibly well composed and acted, and flawlessly orchestrated – especially considering how seamlessly the complex, non-linear narrative unfurls – though there are moments of hyperbole and over-indulgence it could have worked better without. The film works best when the characters don’t over-explain. At one point in a conversation regarding his last mission, Lena says to her husband, “The silence around it was was louder than usual.” It’s a great line and a golden effect that Garland mostly carries off.